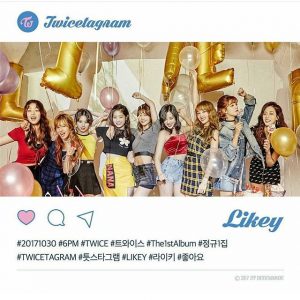 After winning over Koreans’ hearts with their charms and catchy songs, the ladies of Twice are back with their first full album, Twicetagram. Thanks to a streak of successful singles, they’ve managed to break records and climb music charts since their debut; but a full album was a challenge they had yet to take on.

The first full album is a milestone in an artist’s career. Not only should it have some kind of coherence in sound, but it should be a way to show the artist’s best qualities and potential to grow further as a musician. Too bad Twicetagram fails in all these purposes. Having Twice rely on singles and EPs for a whole two years was probably a well thought strategy of JYP Entertainment, trying to have visuals back up whatever was lacking in their skills. Still, despite the long wait, the album doesn’t show an improved, more mature version of Twice — and its post-producion turns out just as sloppy.

Even with great anticipation and a fun title track, Twicetagram ends up being dull, poorly produced and forgettable. The Twice members are absolutely adorable — and have come a long way since their Sixteen days —  but their improvement isn’t showcased in this album. It’s true that many of the Korean members participated in the lyrics for Twicestagram, but one expects more musical depth and growth from a group two years into its debut than the album offers. At the same time, it’s well known that idols aren’t given much freedom about their music and Twice is surely no exception: it’s up to the producers to pick songs wisely. 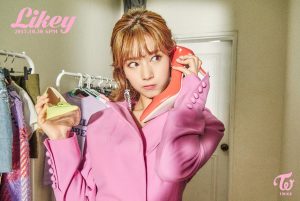 Having idols write lyrics has been a strategy widely used in K-pop, as to try to show that not everything is manufactured by the company and there is some artistry into the releases. Still, being that all Twice members very young — especially the two rappers Dahyun and Chaeyoung — there is only so much depth one can expect. Their young age is clearly reflected into all lyrics they have penned, such as those of the rap of “Missing U”.

You promised me, without thinking twice
Like a fool I firmly believed in you
When you left me you had nothing pricking on your conscience
But I still miss you

The issue with immature lyrics gets especially bad when they are specifically written that way by adults and are intended to be sung by the members, such as those of “Likey”. “Likey” is the best track on Twicetagram, everything works in the production and it’s impossible not to hum the melody even after just one listen. Sadly, Black Eyed Pilseung and Cheongun’s lyrics ruin the otherwise perfect addictive K-pop hit, painting a shallow and stereotyped image of young girls. 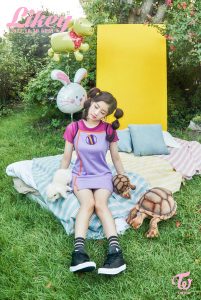 I want to look the prettiest ever
in that small screen
But I’m still hiding my feelings for sure
(…)
BB Cream pa pa pa, lipstick ma ma ma
Shall we try to prettily capture it on camera?
Look at this and smile
Also make sure to press
that tiny red button heart heart

When the members themselves are given the chance to write lyrics — such as Nayeon and Jihyo in “24/7” and Jeongyeon in “Love Line” — the result might not be extremely deep and meaningful, but it is more genuine and truthful. This is not the place for a deep analysis of the misogyny in Twice title tracks’ lyrics (“Cheer Up“’s “A girl can’t give her heart too easily” is still unbeaten to this day,) but it’s safe to say that girls in their late teens and early twenties don’t just think about looking pretty all day. To hear something like “There are so many pretty clothes in the world” in “Likey”, a song potentially played everywhere in Korea, is honestly off putting.

Another off putting element of “Likey,” and several other tracks on Twicestagram, is that a girl of 21 years like Momo, sings in a forced baby voice. Aegyo and acting cute are nothing new when it comes to girl groups, but it gets awkward when grown up women who definitely passed puberty act childishly for the purpose of sounding ‘cute’ to listeners. And yet, the use of baby voice is recurrent throughout the album — it’s also found in “FFW” and “WOW”. 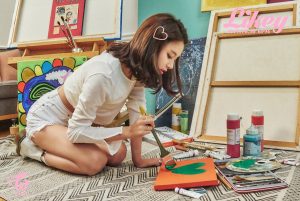 Aside from the annoying use of baby voice, “FFW” is a catchy song with an overall 90s bubblegum pop vibe and whose cheerleader-like chants remind of the atmospheres of “Cheer Up” and “Headphone“. On the other hand, “WOW” is not as effective. The song has a very disjointed instrumental (at some point a saxophone can be randomly heard), and the fact that it’s sung in a baby voice just makes it harder to give it a second listen.

Not everything that sounds a little weirder than the typical cute girl group song is necessarily bad. While the start of “Rollin'” leaves the listener a little confused, it ends up being very fun once pre-chorus and chorus hit, making it impossible not to sing along. Another great song — while still very typical for a girl group — is “You in My Heart”. This song reminds of 90s girl groups’ hits such as those of S.E.S, and the outcome is delightful. Twice are not known to be the most outstanding vocalists in K-pop, and “You in My Heart” manages to highlight the best qualities of their gentle and sweet vocal tones without pushing their voices through uncomfortable dynamics.

Given that the girls are not vocal powerhouses, it’s not the best choice to have them sing high pitched songs with little production behind the instrumental. The result is strained vocals that can’t be hidden by minimalistic instrumentals. This is very much noticeable in songs lie “Turtle”, “Missing You”, “Love Line” and “Good Night”. The latter is a lullaby that closes the album, surely a nice gift from Twice to Once, but not backed with vocals strong enough to make it honey for the ears for everyone else. 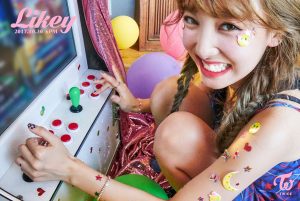 To point out all the flaws of Twicetagram in a blunt way, without considering how little power Twice must have had in its making, is surely unfair. It makes no sense to point fingers at young women for something their producers should have crafted better. In fact, when given freedom, such as what has been done letting the Korean members write lyrics, some potential can be seen.

This doesn’t change the fact that Twicetagram is hard to listen to from start to finish. Its sound lacks whatever kind of coherence and the production seems rushed and desultory. The album fails to showcase significant signs of growth and maturity of the girls, especially after some really brilliant mini albums earlier in their career such as The Story Begins. A singer’s career can’t rely solely on catchy, but empty title tracks and viral music videos. At two years into their career, JYP Entertainment should work to let the Twice’s talents bloom.

It’s true that Twice have reached a level of popularity where their albums are going to sell very well no matter their content, but if an album has to be filled with so many forgettable songs, maybe it’s better to stick to singles and mini-albums until their is enough quality material for a full album release. This is no more clear than with Twicetagram, where the lead single outshines every other song in a way that makes a full listen of the album quite dull. Hopefully, with their next full album, we will get to hear something a little more thought out and mature.