Twice Gives More of the Same in "What Is Love?" 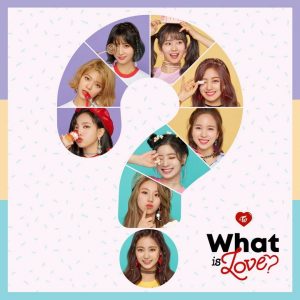 As a girl group, Twice has succeeded massively in just about all fronts. They have the right amount of charms, sweetness, and innocence to turn anyone into a Twice fan. Their visual persona as a band along with their addictive song hooks have kept them on top of the charts since their debut from JYP Entertainment‘s popular competition show, SIXTEEN.

Fast forward to the past year, Twice have been kept busy. First releasing their mini-album, Signal, followed by their second Japanese complication album, #Twice, and eventually debuting their first full-length album, Twicetagram. All were comebacks that resulted in massive success for the group. Now, just in time for spring, Twice have returned with their fifth mini-album, What Is Love? which ultimately feels like an extension of their previous work: dull and forgettable.

Leading this EP is yet another fast pace and catchy single from the group titled “What Is Love?” As the lead track, the song succeeds in having a fun and bright melody while at the same time incorporating a trap-influenced chorus that really becomes the highlight of the tune compared to its slow beginning. Lyrically, “What Is Love?” has the same themes of love and infatuation that have become the staple motif of almost all Twice songs. The girls are dreaming of finding their prince charming and finally discovering a pure and heartfelt love that they have only ever been exposed to from dramas, movies, and books. Nayeon opens the track by singing:

Every day, I felt love only in the movies
Or in books or dramas
That’s how I learned love
My heart kept racing as if it was my story

For the most part, the girls do a wonderful job of keeping the song interesting with their harmonies and singing in their most comfortable vocal range. However, even though Twice’s title tracks get instantly better while watching its accompanying music video, for this comeback the “What Is Love?” video just feels like more of the same visual content the group has released in the past. It follows the same cosplay narrative that the group gave us with their viral hit “TT” and the superhero power visual “Signal” which ultimately leaves the “What Is Love?” video as cinematically uninspiring, although arguably entertaining. 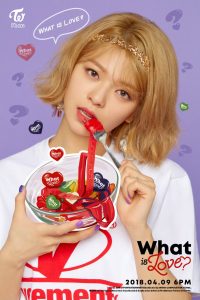 The rest of the mini-album, with few exceptions, feels like leftover songs collected from their previous work, Twicetagram, which was overall lacking in production value thus making the songs lackluster and inevitably forgettable. What Is Love? suffers from the same problem in that almost no diverse musical depth is present throughout the album which consequently works in stunting Twice from musically growing as a group now three years into their careers.

Songs like “Sweet Talker” written by members Jeongyeon and Chaeyoung and the album closer, “Say Yes” do nothing but slow the album down into a dull trance with melodies and acoustic sounds which have been repeatedly recycled within Twice’s discography. It isn’t until the song “Ho!” written by member Jihyo, where the album really changes pace with a fresh and rich sounding melody that can easily fit right into the Grease soundtrack with its 50’s inspired musical production and instrumental. Unlike a handful of Twice songs, “Ho!” doesn’t wait until the chorus to become interesting. Right from the start the rhythmic background clapping sounds and the lively repeated drum beats sets this song apart from its contenders making “Ho!” an easily enjoyable listen and makes the bland storytelling forgivable. 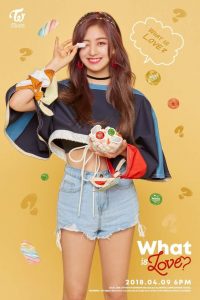 The best song What Is Love? has to offer is by far the track “Dejavu.” Although it is the shortest from the album, it showcases what Twice can do within the genre of dubstep. The song is an excellent example of using a simple “LaLaLa” chorus line and making it resonant by mixing it up with an energetic and loud instrumental that is far from being unforgettable in comparison to the album’s other b-sides. In a way, “Dejavu” was the needle in the haystack that left me wanting more musically diverse sounding tracks from Twice and less of the candy-filled themes that have saturated Twice’s albums right from their debut.

It seems that with each new comeback announced, the hope in which Twice takes a different musical route diminishes. Twice has a formula that has proved successful in the past and in reality, has a slim chance for change. And while they may make addictive and fun title tracks, they are lacking in album production with lackluster b-sides that add nothing to the group’s already dull discography. It’s more of the same with Twice’s What Is Love? but my undeniable desire for this group’s future improvement will not be withered away anytime soon.