iKon Is Chill and Drama-Free in "Love Scenario" 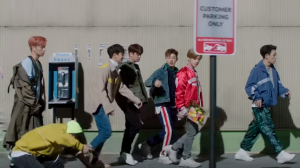 iKon has returned with their first single, “Love Scenario,“ off their second album, Return. In iKon’s previous comeback, they debuted two hip-hop party songs, “B-Day” and “Bling Bling,” with equally hard-hitting MVs full of color, strong beats, and enthusiasm. For their latest single, however, they decided to tone down the hype with a simpler concept and a mellower hip-hop song showing a more mature side of them. “Love Scenario” has already charted on music charts like Korea’s music site, Melon.

B.I., who co-wrote the song along with Bobby, starts off the song with an off-key but catchy melody that will repeat throughout the song. In the MV, we see him staring at shots from a film reel, and the scene switches to images of the boys sitting and walking through an isolated bus stop. For the rest of the MV, the boys are typically dancing or standing around the parking lot of a shopping plaza. For a song about the end of a relationship, the tone doesn’t evoke much sadness or love. In fact, the MV has a more care-free atmosphere with only a few sudden implications of a troubled relationship.

There are quick injections of “love scenarios” that do go through the motions of the beginning of a relationship to the end, but they’re not weaved into the MV well. In one instance, during the hook, we see B.I. kissing a girl, then with his back to her, and then him by himself rubbing his forehead. It tells the story quickly and simply– they were in love and it didn’t work out. However, it doesn’t create any drama, and isn’t enough time to sympathize with the characters.

There’s also a running theme of spinning, paralleling with the moving reels of film from the beginning of the MV, as we see the couple spinning and the camera sometimes going in circles. The choreography also incorporates circles, spinning, and twirls. It’s an interesting stylistic choice but leaves me dizzy at times; although, it does tie back to the film reel which shows up again at the end of the MV. 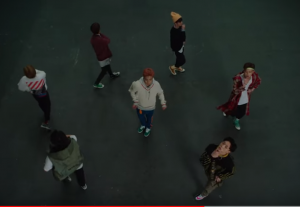 Additionally, the threadbare plot does highlight the dance moves which are the best part of the MV. The choreography is in tune with the beat of the music, and we often see the boys encircle and spin around the main vocalist which emphasizes that person. It then contrasts with other moments where the members look like they’re all over the place and free-dancing. While the dancing is different at the times, it’s always loose and fun building on that easygoing atmosphere.

The boys are mainly wearing baggy, casual, and warm clothes that look appropriate for their midnight let’s-just-dance-it-off mood. The colors of their clothes vary with some bright blues and reds that stand out against the mostly gray-blue backgrounds. The shadows around them create a lonely imagery which contrasts with the ending scenes when they’re suddenly shone against a brightly lit red background. The changes in the lighting take us through the waves of the song lyrics as they’re first contemplating the sadness of the breakup, but then pick themselves up emotionally and are looking more cheerful. 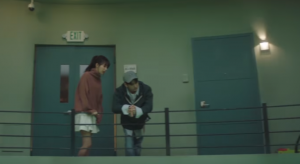 The single is upbeat for a breakup song but in addition to heartbreak, it’s also about coming out of the other end. The lyrics tell us that while the end of the relationship was difficult and saddening, it was for the best, and the narrator is at least left with memories that they can cherish. It’s a mature take on a breakup, instead of being spiteful and depressed, it takes a more logical angle:

If the relationship dragged on

I loved you and you loved me back

So that will do

The song carries a repetitive yet addicting melody, but never builds up to any strong moment. Although it’s tamer than their last comeback, it shows a more grown-up attitude in love without sounding arrogant. Being able to move on from a relationship quickly might come off as insensitive and uncaring but the lyrics also show that they appreciated the time together, as well as being understanding about why the love needed to end.

It’s a shame the MV doesn’t accurately portray this theme and unique outlook. With such a bland MV, though, the dancing does take center stage, and it shows off the great timing in the choreography that carries well with the beat of the music. Hopefully, as the members continue making original music they will also have the MV to back up their creativity.