Victon's "Remember Me" Is A Missed Opportunity

Victon’s comeback coincides with the first anniversary of their debut and deals with the theme of fidelity while assuming an ’80s cinematic visual mood. “Remember Me” is the title track from the group’s fourth mini-album. Victon has pivoted through different styles to varying degrees of success; this comeback has them trying the overworked tropical house trend. “Remember Me” shows potential in some areas but its lack of coherence across media landscapes is perplexing.

The look of the MV is decidedly retro with everything from the props to the colour scheme borrowing from ’80s New Wave. The approach is an uphill battle considering the amount of content stylistically, sonically, and conceptually inspired by the decade released this year. Victon’s approach is purely visual. The members all have individual moments in sets with the look of a classic film meant to be their ‘movie’ watched by the woman protagonist. 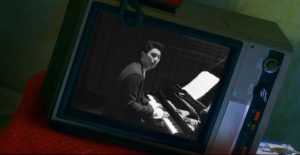 The effects and sets have disparate influences when it comes to eras of film but all are nostalgic. The watery light reflection projected on the members during some dance and individual scenes look straight out of a Rick Astley video. Some of the moments seem to have a specific reference. Seungwoo’s individual scenes look like they were inspired by Michaelangelo Antonioni’s “Blow Up”. Byungchan reenacts a moment made iconic by Carey Grant in “North By Northwest” when he’s chased by a crop duster. Sabin’s moment is a more recent basis for his movie with his character writing on himself and his walls like Leonard in “Memento”. The contrast of these specific citations with more generic scenes like Sejun standing under a lamppost with flowers next to a classic car make the execution of the concept imprecise.

The scenes are shot are in soft focus and even though the movie references are from different time periods the cinematography views them through an ’80s mod lens. The stark graphic compositions and solid neon colours help to tie the aesthetic together. Without thinking too hard about it, the visual story is cool and trendy. If the concept had not been done to death it would’ve been serviceable but it suffers by comparison to others’ greater execution. 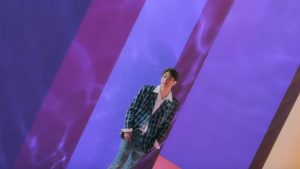 The imagery of the MV becomes perplexing when paired with the music because it is moody while the music is a lively, tropical house song. The production and instrumentation choices obscure the intention of the song from imploring to sounding like it should be played at a pool party.

Remember me in your heart
So I can breathe with you forever
Remember me, for me, who has lost you
Who was my world, my everything

The lyrics are emotionally fraught in all the verses until the chorus which is inexplicably just “remember me eh eh oh eh eh”. The integration of the hallmarks of the tropical trend is frustrating when synth-pop from the ’80s, whose visual aesthetic “Remember Me” borrows, would be an ideal genre for this message. New Wave often made use of emotive vocals through singers like Marc Almond, Alison Moyet, and Tony Hadley. A K-pop interpretation of ’80s synth would be a strategic idea from Victon whose group is mainly comprised of vocalists but this song is planted firmly in trouse territory. 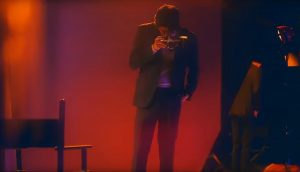 “Remember Me” feels like a missed opportunity considering the talents of the group members and the musical potential of the visual genre they chose. As a complete work, the MV is discordant and the instrumentation doesn’t support the visual tone or the lyrical thrust of the song. The group was set to chase two trends that have been done to death this year; if they had chosen one and committed to it the result may have been more compelling. In its current iteration, the music is interesting enough to hold a listener’s attention but the disconnect between the visuals and the sound of the song takes away from the strengths of each element. The creative direction was a disservice to the group as chasing fads left them lost in the crowd.

(Youtube, Lyrics via Pop!gasa, Images via Plan A Entertainment, RCA)