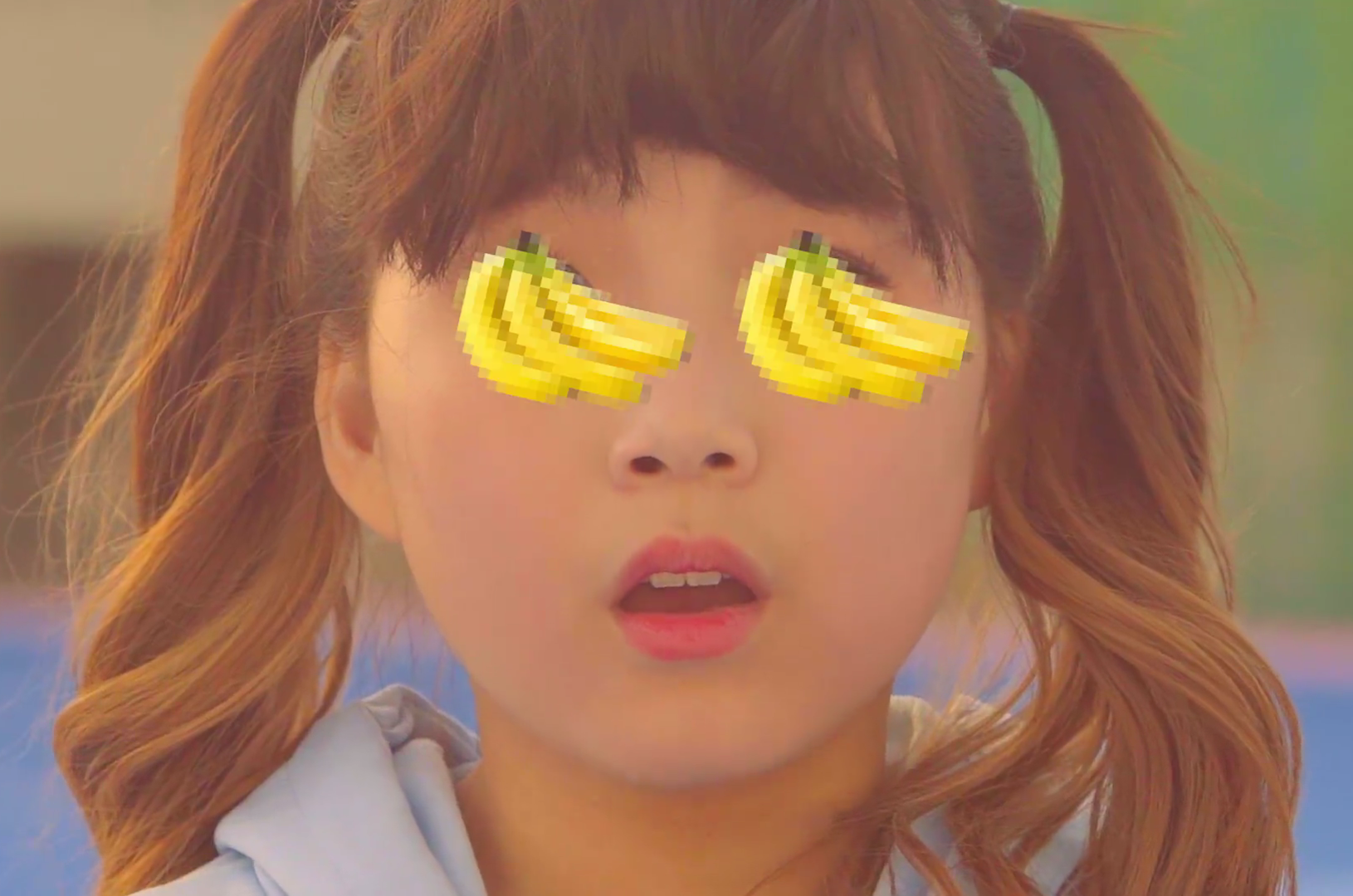 K-pop is familiar with the commonly recycled concept of portraying girl idols as young and adorable. Red Velvet has been through it with “Rookie,” IU with her album CHAT-SHIRE, Oh My Girl in “Colouring Book.” Hi Cutie brings to the plate what can be considered as “the real deal.” The newly debuted girl group is signed to Space Music, with the girls being an average age of approximately 12 years old. The maknae of the group is only 11 years old, while the oldest member is 15 years old. Their debut song, “Play U,” markets this childlike innocence to its MV viewers.

Their debut has resulted in unhappiness regarding allowing such young girls to enter the entertainment industry, especially as idol group members. Some are outraged because they see such activities as destroying the girls’ childhood and that they should focus on their studies instead of being onstage. Others are arguing these girls should be allowed to make choices on their own accord. Digging deeper into the issue surrounding these girls, what is truly worrying goes beyond being allowed to work or study. Rather, marketing these girls by focusing primarily on their age encourages a perverse and disturbing Lolita Complex.

Criticism regarding the propagation of the Lolita Complex in K-pop is an old topic of debate. For those unfamiliar with the Lolita Complex, it is an idea derived from Vladimir Nabokov’s novel, Lolita, written in 1955. The Lolita Complex refers to men’s sexual desire for young girls, an echo of the novel that narrates the story of a grown man and his obsession with a 12-year-old girl. While the phenomenon continues despite the immense amount of disapproval surrounding it, Hi Cutie brings such concept-marketing to a whole new level.

In the MV for “Play U,” the girls rotate through a variety of costumes. They switch from a simple pink sweater and white skirt, to blue sweaters and shorts, and finally to doll-like stripped dresses full with frills and puffy sleeves. The skirts and shorts are noticeably longer than those worn by most girl groups, arguably resisting the sexualisation of these girls. They dance in what seems to be a sports arena or gym, under the shining sun. The cheery atmosphere bears no hint of promiscuity – these are young girls enjoying themselves.

However, the preservation of a pure and innocent image of the group is not as simple as it seems. The title of the song itself, when coupled with the starting scene of the MV, opens the door to some form of lolicon fantasy. The MV begins with a familiar video game start screen before zooming in on the girls. By framing the MV as a video game, with the girls as characters to be played by the audience, “Play U” objectifies the girls. This paves the road towards fetishization of these young girls as they are portrayed as objects asking to be manipulated, sexually or otherwise.

Furthermore, there have also been comments made proposing the sexual innuendoes suggested by the scene of bananas and carrots that is followed by a close-up of one of the girl’s throat as she is swallowing. The group’s name itself also seems to mimic the kind of conversation opener by males towards females they are attracted to. “Hi, cutie,” or “Hey, cutie” is a phrase that pops up every once in a while in romance films when a male is trying to hit on a female. For a young girl group to have such a group name, and to be called in such a manner every time their group name is called, subtly perpetuates the notion that it is acceptable to approach young girls as objects of sexual attraction. This is just another discomforting facet of the group’s debut, in addition to other elements such as flirting with the audience through the camera. 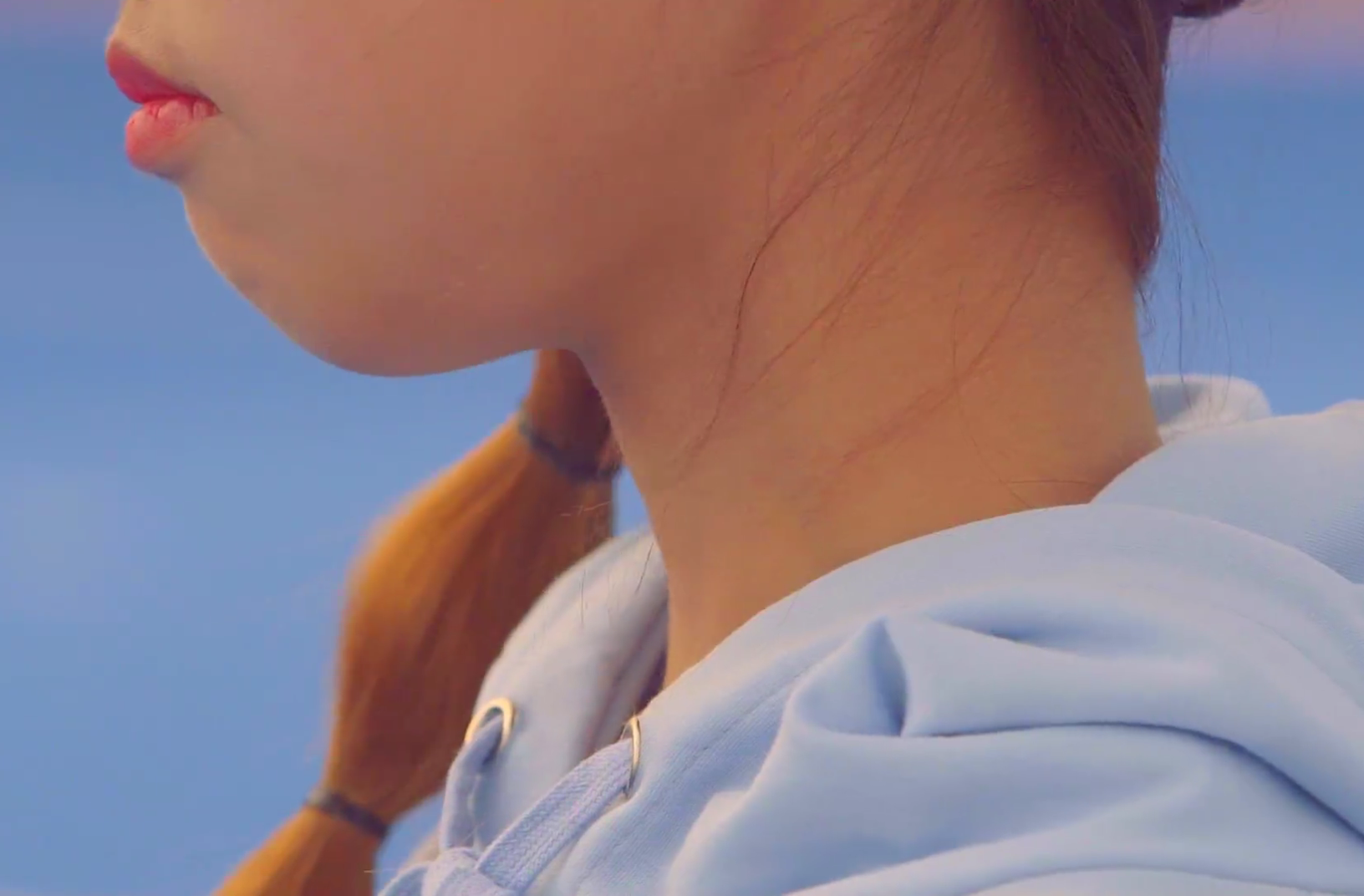 The reality of K-pop girl groups in South Korea is that they have a large male fanbase, ranging from teenagers to middle-aged men. There has been discomfort regarding what is termed “uncle fans,” and debuting a girl group as young as Hi Cutie sells a different image of females to a male fandom. Of course it is reductive to label all male fans as perverts or pedophiles. However, performance and entertainment can never be isolated from its audience. Even if a male fanbase is well-intentioned, the portrayal of these girls do continue to perpetuate certain sexualised notions of minors, albeit subtly. The fear then is the slow normalisation of such perceptions in the minds of not only males, but also other females and even the performers themselves. Girls grow up thinking that it is alright to be viewed as a sexual object from all males, regardless of their age.

On the surface, Hi Cutie’s “Play U” is far less suggestive than the MVs of other girl groups. The pure and untainted image of the young girl is preserved. The MV’s concept could easily duck away from criticisms of infantalising its performers – but it is worthwhile to note this it is only made possible because of the age of the girls themselves. There is no need to repackage them as young girls. They already are young and advertising them for their age condones the Lolita Complex even more than “false” versions constructed in the MVs of older girl groups.

By pushing for these girls to be marketed based on their age is highly problematic. It might seem an exaggeration to call it some form of child prostitution, but it can so easily be considered so. Sexualising young girls in exchange for profit is different from sexualising an adult. The latter is definitely questionable in itself, but the former seems far more severe because of the lack of voice a child has. This ties back to the claims that these girls have chosen this path of their own free will, and that they have to deal with the industry’s multitude of problems. 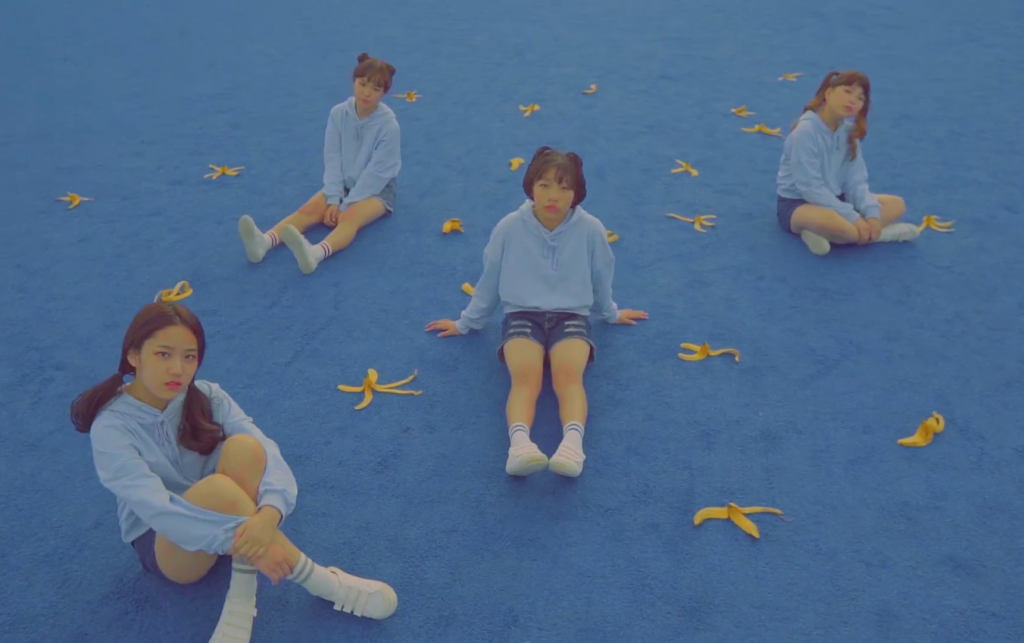 Straying away from the convoluted arguments around the Lolita Complex, the more direct reasons for opposing the debut of such young teenagers are also worth considering. These girls have made the choice to be part of the entertainment industry, but as minors the adults in their lives should be responsible for protecting them and not exploiting them.

The debut of idols at a young age are far from rare, and some consider fussing over the age of these girls is unwarranted. Firstly, just because many idols are entering the entertainment industry at a young age does not simply make it acceptable. Secondly, most idols debut at the age of 15 or older. BoA is often seen as an exception, having debuted at age 13, and even she avoided marketing her age, but rather focused on her talent as a performer. Perhaps the only other groups to come close to Hi Cutie are GP Basic, and later G.Story. GP Basic debuted with an average age of under 13, while G.Story debuted with an average age of 9.75. The latter has been assumed to have disbanded, whereas GP Basic faced the same controversy regarding their age when they debuted.

Back in 2010, when GP Basic debuted, their maknae Janey was only 12 years old. As a result, she was banned from performances on music shows for being too young. Seven years have passed, and now with Hi Cutie, is the industry perhaps pushing for a change in regulations and perceptions? There is no definite answer to such a question, other than how idols are indeed debuting at increasingly young ages. 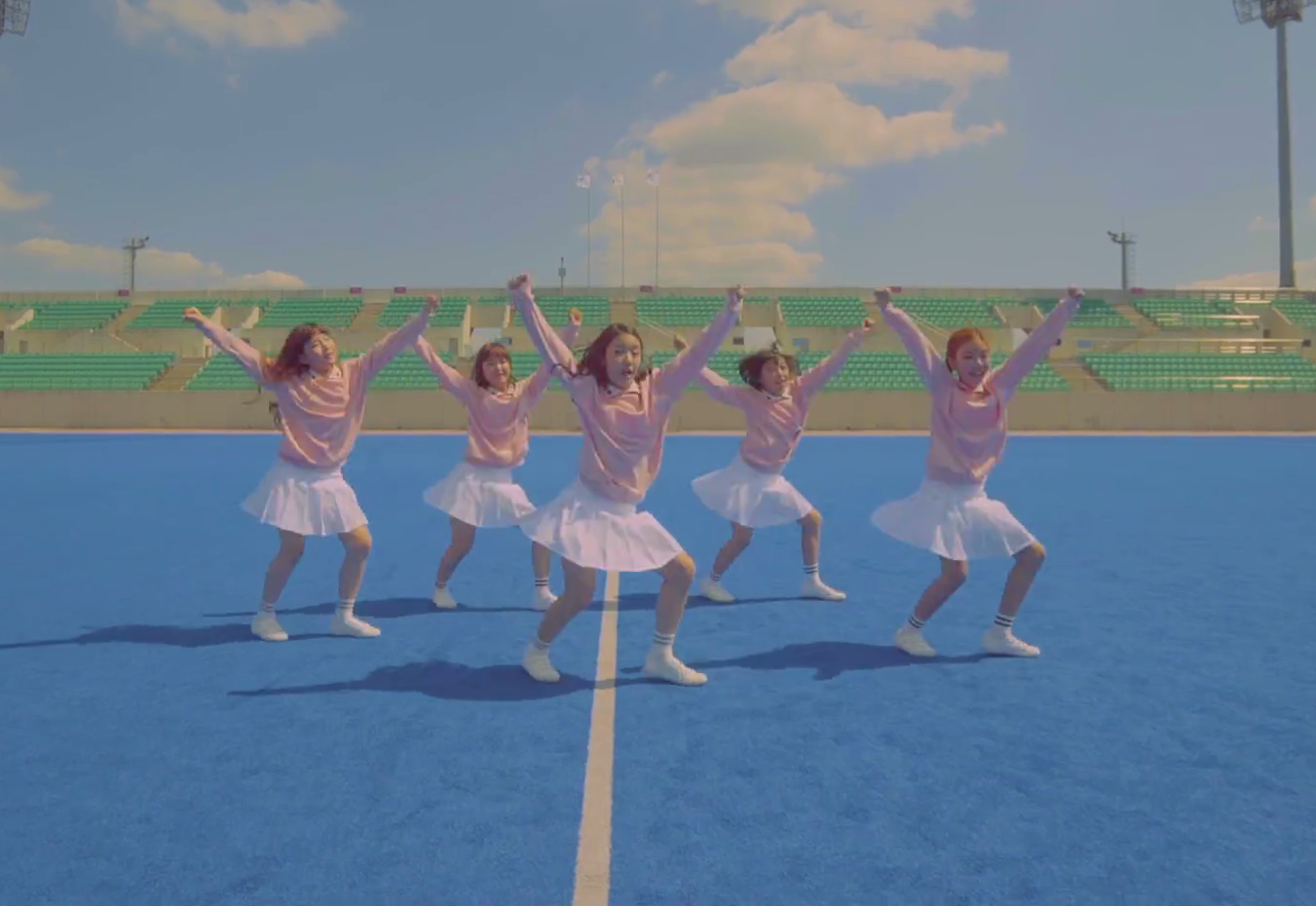 Even with idols that debut at the age of 15, concerns regarding the disruption of studies and exhaustion due to being a trainee prior to their debut are constantly being raised. These girls, at a much younger age, have paved themselves a path into the entertainment industry. Arguably, school is not the only way to happiness or success. These girls should be allowed an avenue where their talents can be developed and showcased. Being an idol might seem like a painful road to walk, especially as a girl group member that is subject to sexualisation, infantalisation, fetishzisation, objectification, and so much more. However, all these can easily be prevented.

In the case of Hi Cutie, there is nothing wrong with them being part of the entertainment industry, and working towards fame as girl group idols. In a certain sense, they are no different from child actors. Their debut only becomes an issue when their age becomes a marketing gimmick and they are made into the toys fueling perverse male fantasies.

Going further, as much as this issue of objectification concerns Hi Cutie, it also concerns the K-pop industry as a whole. If it is wrong to sell these girls in such a manner to the audience, it is by no means acceptable to objectify any older girl group idols as well. If Hi Cutie’s debut is unsettling for the public, perhaps it is time to reconsider and initiate a change in the industry’s portrayals of women as a whole.