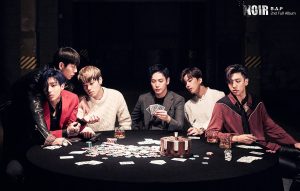 Welcome back to Side B(.A.P). Obviously we’re focusing on the Matoki warriors from TS Entertainment this go around. Last time we did a B.A.P Side B, it focused on their ballads. As a group, B.A.P started off with a heavy hip hop influence but throughout the years have shown themselves to be versatile. From rock to jazz to ballads and dance, the group has challenged several genres. Despite the variety, B.A.P has consistently delivered songs with a message that goes beyond love or heartbreak to ones that make you think, and these are the songs we’re going to focus on today.

Starting with Rose, we find “Dystopia.” At first it sounds like a song about broken hardheartedness but that’s just the surface presentation. Rock-influenced, it takes what would be a breakup song for the ages and relates it to the world as a whole. In this world, even when you feel like you’ve found the perfect place for you, you have to realize there is no such thing. Whether it’s a break up, finding out your boss has a personal vendetta against you, or you realized your best friend is not the person you thought they were, it’s important to try to look at things as they are and not as you have built them up to be.

“Ribbon in the Sky” has always hit me as feeling Kanye West-esque. Between the chanting and the high notes in the climax, the song has a high level of drama to it. It’s a song that starts off high and continues, making it a stand out in Noir. In the midst of all this is a call to break against the system. In particular, rapper Zelo‘s verse talks about opening your eyes wide against the disgusting system. The theatrics of the song lend itself to being a battle cry.

Another gem from Noir is “Confession,” the Bang & Zelo collab we’ve been waiting for since “Never Give Up.” The rap line takes turns talking about anger and fear, and how negative emotions hold you back. It is raw, honest, and lives up to its name in intention. An alternate translation for the song’s title is “Prayer” and the motif definitely sticks as the rappers chant together:

Give me courage, love and wisdom
Please give me the light
So I can breathe

“Thou who wishes to wear the crown, shall bear its burden.” At its core, “Kingdom” is more of a cautionary tale than giving words of advice.  It has the same rallying cry to stand up, fight for what you believe in, and be the change you want to see, but focuses on continuing the fight after you’ve made the first step. For more of a dance-influenced track, the song manages to be serious without being overbearing. The Japanese version is included here because the song was originally released on the group’s Japanese album Best.Absolute.Perfect. And because the video is amazing.

As a bonus track, I’m including “Monologue” from Matrix. The intro to the album, it was B.A.P’s return to the world after the awful mess of a lawsuit in 2014/2015. It embodies one of the group’s main ideals: that we are all stronger together. Going all the way back to their debut with “Warrior,” B.A.P has never shied away from talking about society, youth, or the world at large and it’s good to see that over the years they continue to stay true to their ideals as they evolve as musicians.