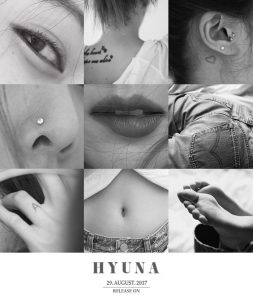 We all know Queen Hyuna as the August comeback girl, with her in-your-face, fierce concepts that ooze sexuality like “Red” and “How’s This?” This time around, Hyuna takes a step back from her strong woman image and uses Following, her sixth mini album, to introduce a softer, more mature but still genuine side to herself. Following doesn’t have anthems like “Because I Am The Best” but instead showcase slower songs that reveal the person beneath the persona.

At first, Following seems in the vein of previous Hyuna releases with the first track being a strong dance track urging the listener to “follow me.” It’s the ultimate party song, appropriately named, and Wooseok‘s (of Pentagon) rap helps to break up Hyuna’s high tone. What the song does is establish a narrative that we can follow throughout the album. From this “Party (Follow Me)” we establish that there’s someone that Hyuna likes, and for the rest of the album we go through their relationship.

We go next to the title track “Babe.” There’s the feeling of new love, of being head over heels and feeling like a teenager again, even if you’re far from it. The song is somewhat ethereal and the chorus is addicting. Hyuna uses her voice to her advantage, deliberately sounding higher and younger at some points. Expressing the sentiment of being so in love you feel like a kid again isn’t new, but Hyuna makes it hers. She’s effortlessly sexy in the MV but still recognizably herself. She’s toned down with the makeup, doesn’t have on an over the top outfit, and it mixes perfectly with the cosmic goddess concept the video seems to be aiming for.

We move along to the next track which continues to the peak of happiness. In “Purple,” Hyuna mentions three colors in regards to her lover: purple, red, and yellow. As most know, purple is the color of royalty, but also represents devotion, peace, and pride. We talked about red recently, but red can mean passion, desire, and confidence to name a few. Yellow is a color of happiness, loyalty, and joy. These are all emotions associated with a new relationship, or even just a very passionate one. Being in love is a roller coaster and the back and forth between Hyuna and E’dawn captures all this.

Let me guess what my heart is.
Tell me what your heart is.
Roughly approaching
Maybe I’ll leave you alone.
Say it.
How about you bore a little more dangerous?

It takes constant effort to get used to another person, learning about them, and deepening the relationship. After a certain point you have to make the decision if it’s worth it. Hyuna decided that it wasn’t worth it, that the person she was with just bored her. She later reflects on it with apparent sadness, lamenting not necessarily the loss of the other person, but the change in herself from the time spent on the relationship. 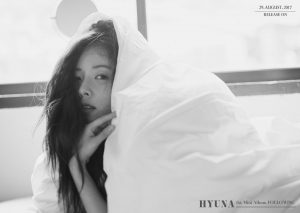 We know Hyuna as a the ultimate girl crush but Following with it’s subdued tracks and thoughtful lyrics show a different side to Hyuna as an artist. The mini album is cohesive with the perfect collaborators so as to enhance Hyuna’s sound instead of overwhelm her. While not full of summer jams like what would be expected, Following does a good job of presenting Hyuna as a better version of herself.