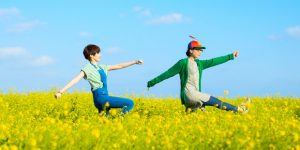 There’s heavy metal for afternoons I’m pissed, Top 40 for nights out with girlfriends, and dramatic ballads for mornings I’m wallowing. But what genre or artist is a suitable cure for the day-to-day anxiety of dealing with life? As I stressed over moving into a new apartment and changing jobs, my friends took it upon themselves to prescribe the correct auditory relief. I was sent long playlists of Schubert and Debussy, Brown Eyed Soul and Ra.D – with many lovely songs worth savoring – though none worked as the balm I wanted to temper my jitters.

“What if I my boxes get lost?” I asked my mom. “And what if nobody likes me?” I asked my coworker. I squirmed and fidgeted and resisted packing through the summer, until intervention for my insecure self arrived through Okdal’s latest single, “Coming of Age.”

Let’s not push it
Time goes by
It’s invisible.
Slowly,
We can fall when the wind blows
The days are imperfect
They pile up.

The women of Okdal, Park Se-jin and Kim Yun-joo, may only be in their thirties, but they’ve long provided the wisdom of old souls since their debut in 2010. With “Coming of Age,” their lyrics retain the elegant simplicity they are known for on the domestic indie scene – nothing ornate, nothing angsty, just truth talk, pared down to its most gentle essence. In the vein of their full band name (Oksang Dalbit, or Rooftop Moonlight), their words are also meant to be mild, yet revealing.

It’s a style that goes well with the homespun feel of Park and Kim’s voices. What their low, soft tones lack in star quality, they make up for in the possibility of belonging to any woman, allowing them the anonymity to become anyone’s older sister doling out advice.

Often, this advice takes on a playful tone through Okdal’s music videos. The clip for their most popular song, “Intern,” follows four awkward girls (including Park and Kim) through dollhouse-esque box rooms as they confront the uncertainty of their lives.

The robotic hand claps and little dance steps may be quirky, but they’re also entirely relatable: we’ve all been through those unfamiliar situations that rendered us stiff and self-conscious. But “Don’t worry,” they sing, “Honestly, I’m also the one who worries about everything.” And as the song progresses, their movements begin to flow, even breaking out of their box set and into the real world. What matters here is not the instrumentals – simply a piano repeating the same melody – but rather the song’s message to be clear and confident.

So much of Okdal’s music deals with growing pains of transitions, there seems to be one apt enough for every moment of life’s stepping stones. For the new working adult, there’s “A Mysterious Era,” an apt illustration of how we try (and sometimes fail) to stay sane in our nine-to-five jobs.

Are you the woman stuffing cheeze puffs in her face, or the guy who amuses himself with a mini-stapler? These are the temporary bits of entertainment we revert to when we’ve been sucked soulless by a torrent of emails and tasks. Chained to an office chair, it’s easy enough to be a zombie, and succumb to the inevitability of work. Yet Okdal reminds us:

Standing here in this world
If you must walk on alone
Open your eyes, listen carefully
Vocalize
Then more than now,
things will get better
then slowly,
live on.

Kim and Park manage to cut through the pandering niceties as they empathize with others, and shine a light on a brighter facet of every situation. For me, they’ve become the sonic equivalent of a back rub – comforting, meditative, and the perfect way to end another stressful day. This intimacy comes as no surprise when one considers the singers’ backgrounds: they were childhood friends, born in the same year (1984), and went on to attend the same university (Dong-A University), for the same department (Music Competition). Playing their music almost feels like being privy to their BFF conversations with each other, and the life lessons they’ve managed to share along the way. Want in? Just listen along with the rest of us.