VIXX LR are Soulmates in "Whisper"

Two years later, VIXX LR are finally back with their second EP titled Whisper with a title track of the same name. It’s a smooth, and sensual mid-tempo song contrasting Leo’s soft and clear vocals with Ravi’s deep rap, with a beautifully-shot music video to boot.

Right off the bat, we hear Leo’s vocals even before the start of the instrumental, which is quite uncommon for any track but also draws focus to his singing. The instrumental and light and unobtrusive, which is befitting of his gentle timbre. Ravi comes in soon afterwards, accompanied by stronger percussion to suit his more powerful and rougher rap. With a duo consisting of a vocalist and a rapper, it may be difficult to balance out the parts since songs usually consist mostly of vocals with supporting rap parts. However, the transition between vocals and rap are done smoothly and without any awkwardness, not to mention the lengths of each section are quite equal as well. 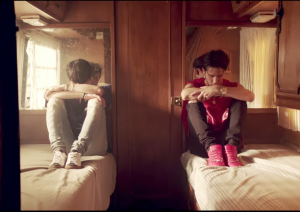 The chorus, though, is where it’s at — the start of the section seems to slow down with the powerful bass line, creating a more sensual mood. This is furthered by the doubling in the vocals by the two members (yes, Ravi does sing!), Leo’s smooth high-pitched crooning, and Ravi’s rumbling whispering of “Whisper” in the lyrics during the bridge. Despite the relatively minimal instrumental, the song is quite intense with just the right amount of sultriness. Ravi and Leo create a beautiful contrast, not only in their roles of rapper and vocalist, but also in their individual styles and musicality.

This duality is used as the main theme for the music video. It draws on the contrasting colours of red and blue to illustrate their relationship. The video starts off with the two members encountering but not acknowledging each other. While Ravi is clad in blue and has a blue notebook engraved with the letter “L” on it, Leo is dressed in red and puts on red headphones embossed with the letter “R” to signal the start of the song. Already, it is hinted that these two with their respective accessories have some sort of fated relationship.

The colours then cross over to move away from present day to another, perhaps, parallel universe, where Ravi represents red and Leo blue. With red being the colour of passion and strong energy, it makes sense for Ravi to take on a more dominant character. He is clad in accessories and tattoos, and is dressed in tough jersey-like tank top; even his makeup is bold with the red-accented eye look. On the other hand, there’s Leo, indoors, dressed in softer hues with a simple button up. He is surrounded by yarn strings (of fate, perhaps?) as he gently browses the numerous surrounding books. A nice touch is added as one of the books is titled Beautiful Liar and another Whisper alluding to the duo’s releases.

As Leo reads one of the books, a constellation-like illustration of two people — one blue and one red — holding hands is seen, which is one of the key giveaways of this soulmate concept. The music video then builds up as the two come together by the strings entangled blue and red strings. As they are bathed in their respective colours, the contrasting colour is suddenly projected onto their faces, and a red-tinted Ravi fades into blue-hued Leo. The final climax of the music video shows the duo’s choreography, concluding with them back in current day, where they discover that a red and blue string attached to their shoes prevent them separating. While the video doesn’t make clear their relationship, leaving it up to viewers’ imagination (fanfiction, anyone?), it’s clearly a soulmate concept at its finest.

VIXX really never fails to deliver on their concepts. From “Beautiful Liar”, where the members represented opposing truth and lie, this track seems to be a continuation of the contrasting relationship. It’s a beautifully thought-out music video of a powerful track that leaves just enough ambiguity to keep us on our toes.