B.A.P Goes on an Exhilarating “Honeymoon” in Blue Album 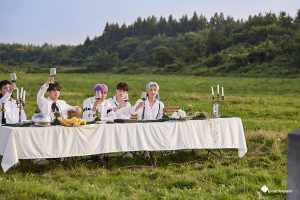 As the continuation to their album color series, B.A.P came back with their 7th single album Blue with the title track “Honeymoon.” This comeback has shown another side to B.A.P as a group known for their versatility and experimentation of various styles, while still maintaining their powerful ways of delivering a message.

In contrast to their last album Rose and the title track “Wake Me Up,” Blue gives us an uplifting outlook on B.A.P. There’s a theme of freedom to be yourself and the willingness to move forward no matter what hits you. This upbeat and positive theme is a bit different from previous songs like “Crash” and “Feel So Good.” Rather, B.A.P. are conveying a message that is closer to the message in songs like “Young, Wild and Free.” It’s uplifting, but also nostalgic. If the speculation that Blue is the last of their colors series is true, then they’ve given us a perfect ending to the trilogy (Noir, Rose, Blue).

The music video for “Honeymoon” is simple video but still engaging, beautiful and popping with vibrant colors. The breathtaking scenes of nature in the video were actually taken in South Korea’s gorgeous Jeju Island. The way they captured those scenes, such as the use of zoom-ins and aerial shots needs to be appreciated: you can see the endless fields of green, the sunlight peeking in between the canopy of the lush forest, the shimmering blue of the ocean with shores crashing into the cliffs and rocks, and the stunning sunset with the purple and orange piercing the whole sky. They also captured the boys’ visuals perfectly with their outfits that contrasted with the backgrounds. The group scenes, especially, made them look like angels walking through the field. It’s truly a perfect place for a honeymoon.

There are many ways to interpret this video, with stray objects symbolically strewn about. Though it’s not the first time in a music video we see random items found in places that they shouldn’t be in. What really stands out the most are two certain scenes that show what this MV and song is about.

First is the scene with Youngjae looking down on the ground and seemingly burying something. Zelo then appears in a dark room as if he was the one buried underground. We see him struggling to get out of the room, and later on, he’s escaped from the coffin. This fits in with the song’s message: finding freedom after being buried by all the hardships of reality. Second is the ending scene when Yongguk pours a bottle of wine on the tombstone that has the words, “R.I.P B.A.P” engraved on it (the tombstone is better seen in the Japanese version of the video). Then they all raise their glasses to make a toast to each other. Their gesture is subtle, but what it tells me is that it’s a goodbye to the “old B.A.P” and a celebration for a brighter future for B.A.P. They’re going forward no matter what anyone thinks.

We’re beautiful, I know you hate it
But I’m freer than I’ve ever been

Following B.A.P from the start or joining them along the way, you’d know that with their successes, they’ve also hit some roadblocks in their careers. If you connect the albums in this color series, Noir, Rose, and Blue, they somewhat become a retelling of B.A.P’s story. After everything they’ve gone through, all the ups and downs, “Honeymoon” is the sweet ending. 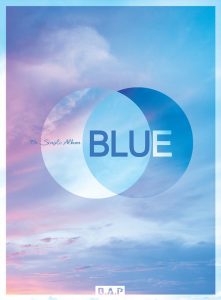 Looking at the Blue single album, “Honeymoon” is quite an experimental track that B.A.P has never done before. There’s new elements in the song that makes it different from their other pop and upbeat songs. It starts out slow and mellow with Himchan’s smooth vocals. The first chorus with Youngjae is also calm, as it focuses more on the addictive whistling and instrumentals. Zelo flows well with his rap, and it’s actually after his part that the song starts to pick up. With Jongup continuing to shine and take on more singing roles, and with Daehyun’s and Youngjae’s dynamic vocals, the chorus changes and boosts the song. Yongguk comes in late and delivers as Jongup continues to belt out the chorus, which was another interesting part of the song. Though, Yongguk’s rap is a bit drowned out by the melody and Jongup’s notes. Admittedly, I thought the song was average and a bit messy after the first listen, but after the second or third listen, I became aware of how much work is put into the song and how all it all works together. It’s an overall thrilling song.

“All the Way Up,” the second track in the album, ties in really well with “Honeymoon.” It has a tropical house vibe with synths in the chorus that gets you hooked. Though, it’s the message that fits in the album. Like in “Honeymoon,” it’s saying that B.A.P is enjoying their freedom to the fullest and is ready to go anywhere.

The final track “Rewind” gives us totally different feeling from the first two songs. The retro vibe with the orchestral sounds and quick guitar riffs in the background makes it sound like a song that should have been in their album Noir. Their voices are smooth and sultry, yet the overall song also sounds melancholic. It’s one of those songs that is perfect for the rainy weather, and it gives a nostalgic feeling when listening to it.

Blue is another album that shows B.A.P’s range of musicality. The title track, “Honeymoon,” experiments many different elements that work well together, while “All the Way Up” and “Rewind” also delivers in their own ways. The most surprising thing about this whole album is how much more colorful B.A.P’s songs are when all of the members have more chances to show their singing abilities, specifically speaking about Himchan, whose voice has gotten more spotlight in this album. Blue is a compelling album worth listening to.