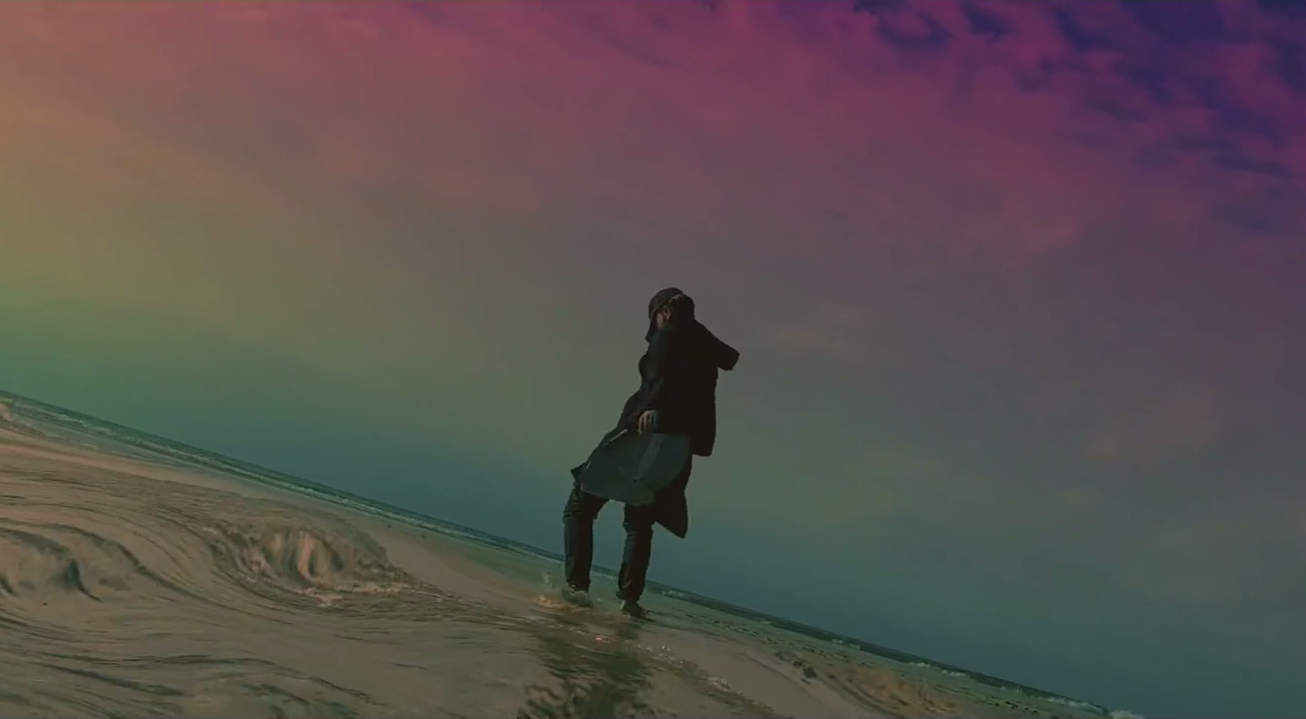 There are hundreds of MVs released every year in South Korea, and as fans we welcome comeback after comeback of our favourite singers. However, behind every great MV is a video production company the spotlight neglects. Even the most avid fans of South Korea’s music industry might not pay attention to the producers behind each piece of MV, focusing largely on the product more than the creators. These underappreciated creatives deserve some recognition, and once you delve into the world of each production company, it becomes almost too easy to identify them by their visual styles and film techniques.

South Korea has tons of video production companies with a spectrum of characteristics that are too much to discuss in a single article. Picking three out of the pool, this is a small but hopeful attempt at turning the spotlight in the other direction – away from the performers, onto the people behind the lens.

Mustache Films produce the kind of MVs that mesmerises because of how poetic or quirky they are. They are probably one of the most stylistically consistent production companies I have seen, recognisable by a number of elements. Mustache Films captures poignancy and pensiveness too well using a pastel palette against a pastoral or domestic setting. These contextual backgrounds surface in MVs like yooncell’s “Hotnoodle,” Rocoberry’s “Broken Heart” and Kassy’s “Let it rain” among many others. The combination of both produces a softness to the image – everything from happiness to loneliness is made beautiful through Mustache Films’ MVs. 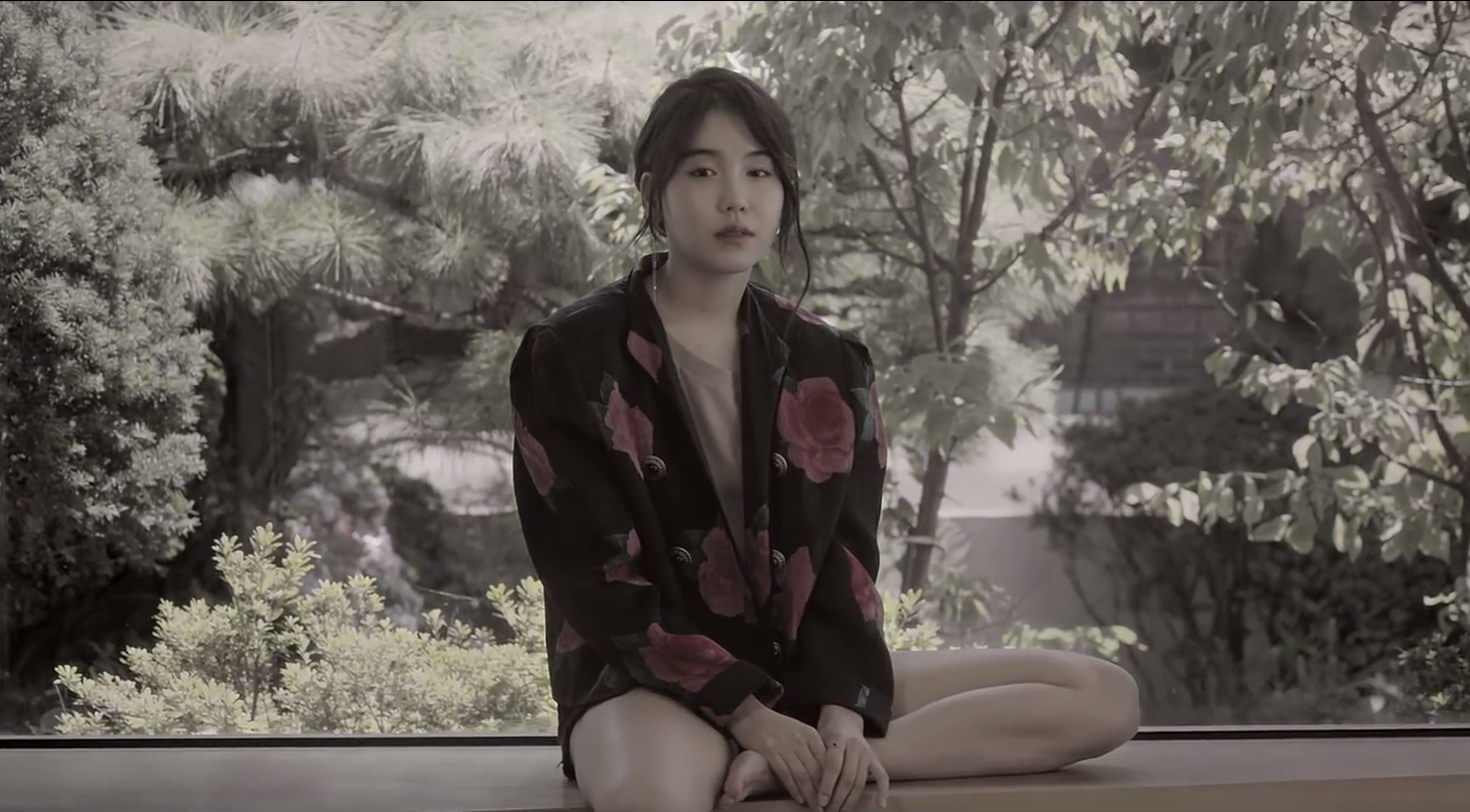 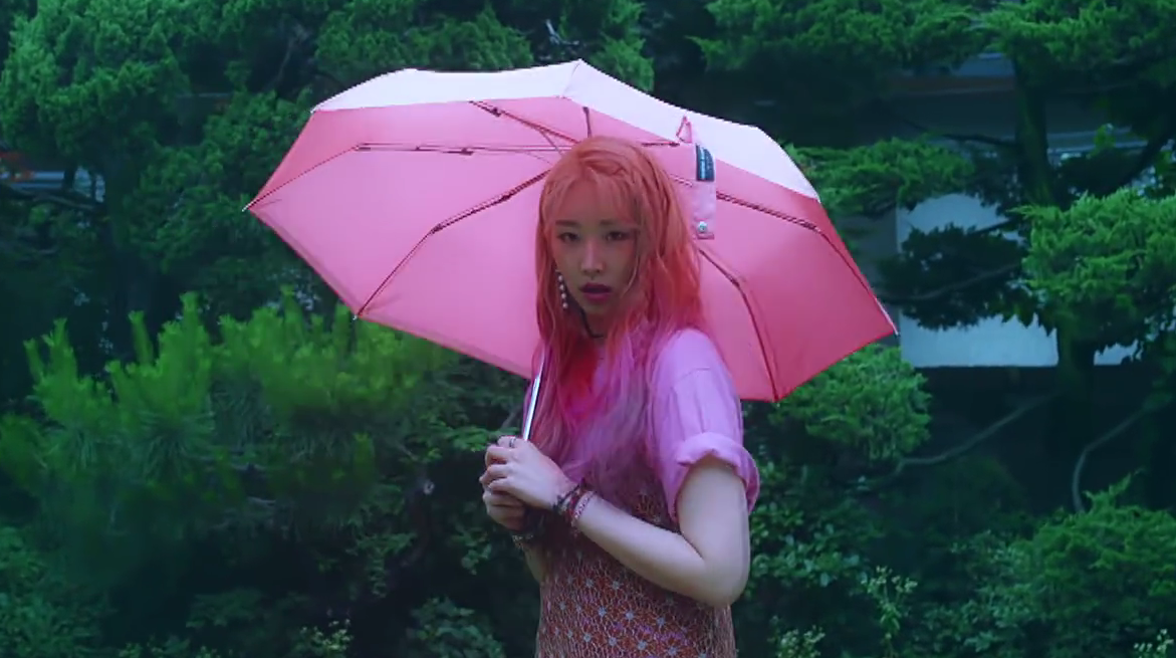 Rather than sticking to narrative coherence, most of the MVs are mosaic sketches of memories, experiences and daily life, making these MVs strangely familiar. However, Mustache Films brings a twist to the familiarity by introducing a distance between the viewer and the characters within the MV. Arguably, this distancing carries through most of Mustache Films’ video production in various direct and indirect ways; the viewer is rendered as a mere observer and oftentimes a voyeur.

The most direct manner used to establish the distance is Mustache Films’ characteristic spyglass frame, forcing the viewer into the position of a third-party observer. Evident in their quirkier MVs (Roy Kim’s “Egoist,” Yu Seung-woo and Youn-ha’s “Can’t Stop This Feeling”), it provides an insight into strange worlds while barricading us from entering the realm of the MV. At the same time, it also appears in Jung Gi-go’s “Across the Universe,” which follows the ordinary lives of a couple travelling in Europe.

There is also the recurrence of a main character in headphones (Soyou and Baekhyun’s “Rain,” Sandeul’s “Stay As You Are,” Ears’s “EQUAL(=)”), closing them off from the viewer’s reach. Immersed in their own world of music which viewers cannot hear, an unbridgeable distancing manifests itself. The frequent long shots, overhead shots, backview shots often portray a memory or experience that we as viewers can never be part of, drawing the distance between those within the MV and those watching. 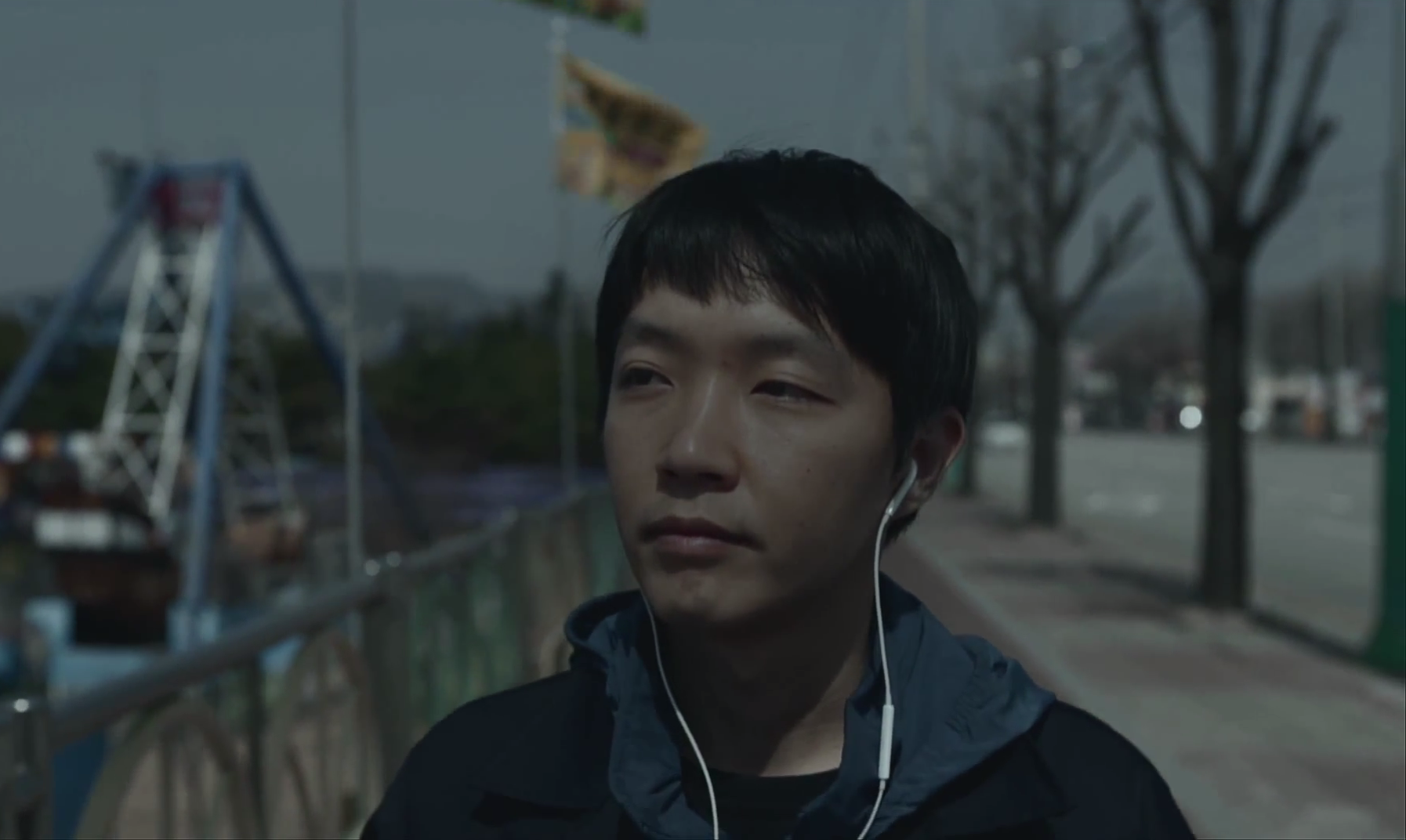 Even if we return to their quirkier productions as previously mentioned, Mustache Films retains their personality with the highly cartoon constructions of reality. Suran’s “1+1=0” is a perfect example: completely opposite from the pastel colours and pastoral setting, the character is still contained within a boxed up and comic version of office life. Bright colours and ridiculous everyday items, manifesting work life in an absurdist fashion. Brilliantly constructed, the same distancing can be detected as we peer into this corridor-box the character is trapped within. Yu Seung-woo and Youn-ha’s “Can’t Stop This Feeling” are complete cartoon constructions of which we peek at through a telescope.

Pastel palette or otherwise, Mustache Films follow a specific strain of aesthetic choices to distance the viewer from the MV. Their MVs embody the poeticism of visual imagery, tracing a fragmented mosaic of scenes from the everyday, capturing moments of beauty for us to admire from a distance rather than bombard us with colours, lights and sound.

Dream Perfect Regime (DPR), as it may shock some of you, is better well known for their music production under the name DPR Live. Active largely in South Korea’s hip hop scene, they have collaborated with Jay Park, Loco, Crush and even rising stars like Punchnello, Sik-K, Dumbfoundead, and many more. When I found out about DPR’s video production, I was expecting a fair portfolio with nothing too impressive – a perspective I have thrown out of the window since.

DPR stays true to what they set out in their own description:

“Based in Seoul, our primary focus is to engage viewers by producing a unique and dynamic experience of both visual and audio output.”

I bring this up because it genuinely reflects the aesthetic style of DPR’s MVs. Perhaps due to their position as musicians, MVs made by DPR are deeply embedded with a sense of musicality. Rather than focusing on creating a mini-movie by establishing a narrative of some sort, DPR’s MVs strive toward creating an experience. What they have managed to achieve is a direct translation of music and auditory sensations into a visual embodiment.

Fundamentally, DPR gives focus to the music and the visuals work directly to enhance the song itself. The synchronised transitions with beat changes, the lighting and props reflecting the music, the camera work creating an image echoing the track itself – it is insane how DPR has managed to braid two realms of art production into one. Their recent release with Taeyang’s “Wake Me Up” is a good reflection of their artistic style (and yes, they have worked with Taeyang). I especially loved the moments when the backlight of the empty corridor flicker in rhythm with the bass melody. The same kind of synchronisation between music and image is clear in tracks like Mino’s Body and Loco’s “Movie Shoot.” Attentive to the details, Loco’s “Movie Shoot” has a splendid static scene of him with only his clothes switching, but in accordance to the beat.

DPR hides another secret weapon: digital art. Digital art is a broad umbrella that includes branches of complex computer generated imagery (CGI) and animation, but DPR uses a simple form of CGI to add their own flavour of psychedelia to their MVs. But this technique is not separate from their attention to music. In Bobby’s “HOLUP!,” items are coloured in with digitally generated images, but only in accordance with the beat, which gives the MV the distinct DPR style of production. More significantly in “Eung Freestyle,” we see an MV infused with DPR’s aesthetic. Their use of digital art to outline or fill in silhouettes, the grungy and dark setting, and the one quirk DPR has carried through a couple of MVs – dashing out eyes with neon brushstrokes.

Many MVs incorporate digital art and CGI, but it is often used to construct visual spectacles. DPR captures music with their technique. No other production company pays as much attention to building a direct bridge between music and image as much as DPR does. Once familiar with the DPR MV experience, it is hard not to be captivated by its kaleidoscopic charm.

The fascinating thing about Zanybros is how they can be summarised by scope rather than style. Established in 2002, the company has grown in massive scale to become one of the most sought-after video production companies in South Korea’s music industry. The company took flight around 2012 when the demand for their video production doubled from previous years. These days, they are producing 120 MVs or more a year. Such impressive numbers also imply that they have worked with a massive number of stars. From idol groups leading the Korean wave to indie and hip hop musicians; from older generation artists to the trendiest ones today, they have worked with almost every name in the industry – Super Junior, Girls’ Generation, BTS, I.O.I, Seo Taiji, Epik High, TVXQ, Swings, Sweden Laundry, Urban Zapaka, and the list goes on endlessly (take a peek at the Wikipedia page and you will understand).

Interestingly enough, they have walked many groups through from their debut days to their peaks. Zanybros made almost every other Beast MV, from their debut “Bad Girl,” to “Beautiful,” “Breath,” “Shock,” “Fiction,” and all the way up to “Beautiful Night.” They are credited for a whole bunch of B.A.P songs, from the group’s debut days of “Warrior,” “No Mercy,” to “Hurricane,” “Rain Sound,” and more recently, “Wake Me Up” among numerous others.

It is hard to narrow down Zanybros to a single style because of the sheer spectrum of MVs they have produced. But if we have to talk about style, Zanybros should simply be credited for what we have come to call the conventional K-pop MV today. Performer in the center and narrative on the side, Zanybros strives to showcase the artist on stage more so than anything else.

In most idol group MVs, this is pretty evident and functional to showcase their dance. Working with a certain concept as the foundation, there are sets and backdrops to facilitate the MV construction. The typical K-pop MV works in such a manner, but the claim of performer in the middle holds even for non-idol groups. Going back to their earlier productions of Epik High’s “Breakdown,” there is a similar performative display, though of course there have been variations across the multitude of MVs.

To attribute such an MV style to Zanybros entirely seems unfair, considering the lifespan of K-pop as extending far before the establishment of the company itself. However, they can probably be credited for propagating it.

These days, more video production companies are entering the industry, bringing their own flavour and sensibilities. Mustache Films, DPR and Zanybros are only three out of a growing pool of creatives. An MV is largely a collaborative effort – it celebrates and markets the performer, but those hidden faces behind the scenes deserve applause for each piece of their art they have painstakingly weaved together.

Dream Perfect Regime Creates Yet Another Visual Stunner with “Jasmine”