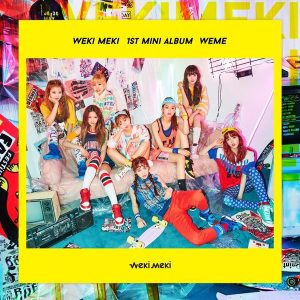 Weki Meki, the Fantagio debut group, released their first music video for “I Don’t Like Your Girlfriend” and the mini album WEME as part of Fantagio’s jump into the new generation of girl groups after the breakup of I.O.I. Weki Meki consists of eight girls, two of which — Kim Doyeon and Choi Yoojung — were I.O.I. members. The teen crush group’s first mini album lives up to expectations, at least with some good b-sides as a cute, explorative, and fun release.

However, Fantagio and Weki Meki tried too hard to create a new concept for their debut track. Weki Meki consists of eight letters. They also have eight members. The group’s mini album and music video were also released on the eighth day of the eighth month of the year. Notice a trend? Because Weki Meki also tried to jam eight different and clashing songs into their title track, “I Don’t Like Your Girlfriend.”

The group advertised themselves as a teen crush concept prior to their debut. The teasers for the group were colorful and in-your-face. Instead of embracing this and making their title track loud, brash, and hectic, they made “I Don’t Like Your Girlfriend” into an incomprehensible musical mess with absolutely no discernible hook. luckily, the rest of the B-sides make up for the title track’s lack of identity.

All the B-sides are pretty equal in strength with few sticking out as obviously superior, like “Stay With Me,” an explorative track that takes the synth through a fairy tale melody to accompany introspective and longing lyrics.

Wherever you can see
This is a small, remote island
I count my candles in my mind
Maybe you have not noticed. It’s ok.
One fingertip has already reached

“Stay With Me” is a strong song albeit with a rap that’s a bit misplaced. Overall, it’s got a strong hook with a catchy musical melody and interesting composition choices such as a chugging and plowing synth through the light pre-chorus. 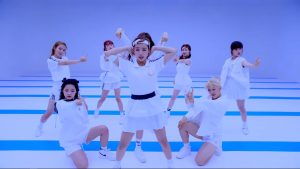 “Someone Like You,” considered an i-Teens Girls Special, (the pre-debut group of Fantagio members) is a cute song with a pleasant melody. It even has some Wonder Girls-esque retro synths that pound on beat throughout the chorus. The song highlights the girls’ voices as they wind and weave through the song.

The ballad of the album is “My World.” It’s a slow and vocally driven song with light instrumentals in the background, very much like other debut ballads from 2017. The song is similar to Loona‘s “Let Me In” debuting HaSeul and “Everyday I Love You” debuting ViVi. It’s a longing song that highlights the vocals of the group. I’ve been impressed with Weki Meki’s vocals and this song allows the quality of the girls’ voices to shine.

Perhaps “Fantastic,” the sixth song, is the best song on the album. Though it would have been a decent single, it probably is not what the group was looking to do with their first single on the K-pop scene. However, “Fantastic” is probably the most fun song on the album. It gets the head bobbing and kind of sounds like a mixture of early Wonder Girls singles like “Tell Me” and “I Feel You” off their retro Reboot album. As a huge Wonder Girls fan, I would love nothing more than to see Weki Meki find some success toying with retro concepts while spinning it around the lens of modern K-pop and the teen crush concept.

While there are obvious weaknesses in WEME, if Fantagio can accept the failure on the title track and move forward, Weki Meki has a future somewhere in K-pop. WEME is a pretty strong album and shows that the group has the potential for a lot of growth in their future, especially with an average age just under 17. While they probably sit at the bottom of the totem pole of-post I.O.I. releases in 2017 — just below Kim Chugnha — there’s plenty of time to come back. Now it’s up to Fantagio and Weki Meki to make the future bright and find the strengths of their new group.