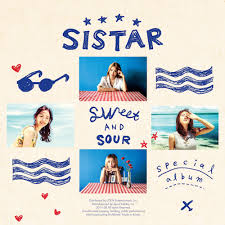 Summer. One of the most packed seasons in terms of mainstream K-pop comebacks and releases. Last year, we talked about our favorite summer songs. This time around, we ask a different question: what is your favorite summer comeback trope? What about this trope appeals to you and which artist has used this trope and made it their own?

Pat: I love a good summer music video that features a beach. Maybe it’s because I hate going to beaches, so I live through the music videos. Maybe it’s because K-pop music videos make it seem like going to the beach isn’t the hassle that it usually is. To nobody’s surprise, my favorites are definitely Sistar’s “Loving U” and “I Swear.” I can think of no other group that I have come to equate to beaches and summer. The main reason why I love the summer trope of beaches is because the beach just screams fun – be it dancing with your girlfriends a la Sistar, hanging out with the bros while giving doggos a walk as seen in Infinite‘s “She’s Back,” or…running away from a UFO (B1A4‘s “Solo Day”).

I also don’t think it’s a coincidence that the one and only AOA song that I like, and the only AOA music video I’ve actually watched more than once, was “Good Luck.” I clicked the video because of the promise of beaches, which has never let me down, and I left with that chorus stuck in my head.

Hridi: I really like the use of colours in a music video if it’s done well. I’m not a big fan of loud and bright colours (unless it’s like element like bright scenery but muted outfits or vice versa. Basically contrast. Warm colours but with some tonal neutrals to keep it in balance or otherwise it hurts my eyes [I sound like such an old lady]) and I really like muted pastels. Like Big Bang‘s “Let’s Not Fall in Love” was aesthetic goals af. Just seeing idols have fun and not on the angst train also tends to lift my spirits when I’m feeling down during the summer months. And yes to MV’s filmed abroad – I like being like ‘omg they went that location that’s cool’. 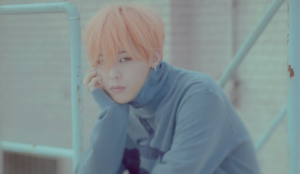 Carly: Hridi, I too love colours but am kind of the opposite- I’m all for bright colours and definitely not a fan of neutrals! The more colour, the better, and brightness definitely has a sort of summery feel to me. I do like pastels, though for some reason, now I think of it, I associate them a bit with winter!

Summer releases are always a little strange for me, because I see them in Winter- our seasons in Australia are the opposite of South Korea and America. Most of the time it just lets me get super psyched for summer early, or start on the trend for the next season before it happens!

I love a great pool party- whether it’s an at-home shindig like Big Bang’s “We Like 2 Party” and 2NE1’s “Do You Love Me?”, a holiday hotel party along the SNSD “Party” lines, or simply a fairly straightforward –pretty-girls-in-pretty-places kind of clip like Sistar’s “Touch My body”.  When those fluro bathers (South Australian term for a swim suit) came out on Park Bom & Hyorin, I wanted a pair so badly. Alas, twas not to be.

And it’s not a proper MV, but I was actually (and still am) devastated to realise that “CaBi” was a CF and not a legitimate MV or opening song for a drama. I was all set to watch the ‘show’ until my sister laughed and told me it was only a CF… the pain is still real.

Brianna: I definitely agree with Carly when it comes to bright colors. Perhaps my infatuation with pastels is speaking, but I admire MVs with bright color schemes.

For me, summer is the brightest season of them all, so why not throw in some color to match? Some MV color schemes I admire are SNSD’s “Party,” Girl’s Day‘s “Darling” and AOA’s “Heart Attack.”

Another summer comeback trope I enjoy is filming abroad. I enjoy traveling a lot, so I think it’s cool when K-pop MVs take advantage of beautiful scenery from abroad. Beauty lives in all parts of the world like Thailand (SNSD’s “Party”, again) and Hawaii (Sistar’s “Loving U”). 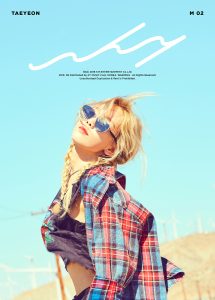 Carly: I’d like to belatedly add “Why” by Taeyeon to my pool themed summer hits! “Why” is a great song with a summer feel.

Other great concepts I enjoy: Sparklers (“Do You Love Me?”, “Why”) and Ice Cream/ Ice blocks (“Why,” and “Abing-Abing” by Orange Caramel).

Janine: My favourite summer MV trope is evenly split between two pretty distinct features: driving and sleeveless shirts. My love of sleeveless shirts will remain unexamined and unexplained so for the purposes of this discussion my favourite thing is the driving.

Few things embody the feeling of freedom that accompanies a balmy summer like a tracking shot of fancy car with the top down. It reminds me of all the nights spent with my friends; singing along to music blasting from a car with all the windows down. I can survive a summer without a pool but it doesn’t seem right without a wild ride.

B1A4’s “Solo Day” features a Cadillac, aliens, and a whistle solo so I strongly recommend it. While Jay Park and Gray released “Drive” in October it’s undeniably a summer song.  Triple H embodied the spirit of a wild self destructive ride in the “365 Fresh” MV. “Oasis” by Crush ticks a lot of summer trope boxes but my favourite is the off road sequence with that black Jeep Rubicon X. To quote summer songstress, Paris Hilton, “that’s hot”. My final endorsement is “View” by SHINee which features more running (and sleeveless shirts) than driving but the sense of motion is palpable and I dare you not to enjoy it on a road trip. 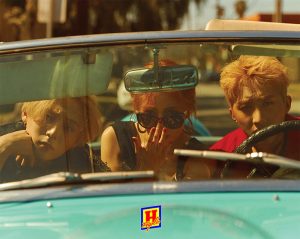 Liz: I’d like to mention old school throwbacks as my favorite summertime MV trope. The bright, fun, and loose outfits of past eras really captures the essence of summer, in my opinion. CL‘s “Lifted” embodies this trope well, as the whole song samples the Wu Tang Clan and the styling consists of ’90’s trends re-purposed with more modern twists (the loose fits, the fishnets, the patterns, the excessive bling). Jay Park and Kirin‘s “City Breeze” is also a good example. Its a pretty obvious homage to ’80s hip hop, which is emphasized through the grainy VHS tape quality of the MV, the oversized jerseys, and baggy pants. In fact, Jay Park seems to have an affinity for songs with old-school throwback vibes: “So Good,” “Let’s Make Up,” and “Aquaman.”

I should mention, that even though I generally love colorful outfits for summery vibes, there’s definitely a right way and a wrong way to do it. For instance, Zico and Babylon‘s outfits for “Boys and Girls” were atrocious. Zico’s first outfit looked as if his stylist got the leftovers from LMFAO’s last MV. Babylon’s outfit near the end of the MV made him appear as if he was a Yakuza going through an identity crisis.

Jennifer: I feel like most K-pop summer songs are so peppy and upbeat that I usually start getting annoyed with them after a week or two, but some songs that always come to mind for summer are B2ST‘s “Beautiful Night” and SHINee’s “View”. There’s an element of lightheartedness and unfiltered freedom that the songs and the videos both really capture and make me think of summer. B2ST’s video is just B2ST wondering around a city and ending the night with a party, while SHINee’s video is just SHINee with a gaggle of pretty girls just partying and doing whatever. I like that theme of spontaneity and just not thinking about repercussions. It’s youthful and really captures summer, in my opinion.

What are your favorite summer tropes? Comment below and let us know!