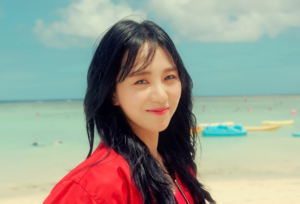 AOA are setting themselves up to be the queens of summer; first with last year’s “Heart Attack,” and again this May with the the surprising lead single, “Good Luck.” For this round of promotions, AOA took to the beach with a formula they know works: a catchy bop, beautiful women, a little girl-power, dance moves that may be censored on broadcast… and a whole lot of appealing to the male gaze.

While it’s a recipe that FNC knows works for the group — and I’m all for sexy concepts being done well — I have to wonder when FNC is going to try something new with AOA. Or maybe even bring back the band concept!? There’s a fine line between sexy concepts that work, and those that seem forced and are perpetuated simply to appeal to the male gaze.

This is the conundrum of “Good Luck,” which is a catchy track, perfect for kicking off summer. It’s accompanied by an MV that is remarkably well-filmed (if not littered a little too heavily with product placement). The set up for the “Good Luck” concept and song package was perfect, and in many ways a sexy concept goes perfectly with the whole Baywatch theme; but, even with the breathtaking shots and decent track, something about the forced sexuality of the MV leaves a bitter taste in my mouth.

Sexy concepts are tricky territory, but this isn’t the first time FNC has earned an eyebrow raise from us here at Seoulbeats about the way they package AOA and sex together. In fact, since “Miniskirt,” they’re 3 for 3.

If you’ve ever wondered what a day in the life of ridiculously attractive lifeguards is like, AOA is here to clear a few things up. As you may well have suspected, they linger on the beach, dance on firetrucks, drink a lot of Sprite, and throw solo dance parties for themselves after the sun goes down. All in day…

What can I say, FNC and AOA know their audience, and that’s exactly who the MV caters to. They promised us Baywatch 2.0 (or is it technically 3.0 given the upcoming film remake?) in the teasers pics, and that is what we were served: beautiful women in swimsuits, frolicking on the beach, not saving lives per-say, but looking like they could at any moment with one of their handy flotation devices. There’s not a lot of plot, but the fun energy of the track is clearly communicated through watching the AOA members enjoy a day in life on the beach. 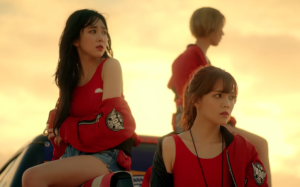 Not to mention, the beach segments of the MV are beautifully filmed; the silhouettes of the members against the sunset, the warmth of the summer sun, the yellows, oranges and blues that make up a summer day, are all captured perfectly.  It’s really a joy to watch as much for the members as it is for the shots themselves.

As much as I enjoy the beachy aesthetics “Good Luck” MV, it really, really could have done without the other shots involving the fire truck. I say this because, even if the beach scenes are still selling me sex, they don’t feel like they’re selling me sex the way that watching Hyejeong grind against a firetruck in a silver midriff top does. Similarly, the dance breaks shot on the same dirt set not only are a stark contrast to the tranquility of the beach, but they feel out of place. Sure, there’s that whole Daytona Beach Spring Break vibe to them, but for anyone who grew up with monster truck rally posters littering billboards, we know too well the relationship between the female body and big trucks in terms of marketing to a male audience. This isn’t to say that attractive woman can’t be sexual and provocative, but when it’s done so clearly to appease the male gaze to the point of throwing off continuity and tone, it is a little disappointing.

In my opinion, the MV was complete with scenes on the beach and the girl power dance party in the shack. FNC should have stuck with that concept and saved the black fringe outfits and monster trucks for another day. (Or never.)

As for the track, well, it’s damn catchy for a glorified Sprite commercial. “Good Luck” begins with a reprise of the chorus, which kicks things off to an interesting start, but also sets the energy high straight from the get go. The verses feature some really cool vocal runs and layering that’s nice to see from AOA, especially from their less prominent vocal line. The chorus then hooks you with a catchy chant of “good luck” against brass instrumentals that have been trending for a while now. Throughout, “Good Luck” maintains energy with just the right attitude to accompany the confident lyrics. 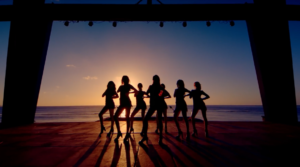 While “Good Luck” is catchy as hell — and makes for a solid early summer release on all accounts — at times it feels a bit unpolished. The chorus could have benefited from a bit more variety of brass aside from the strangled saxophone that becomes grating after multiple listens. Additionally, Jimin‘s rap verse drags on just a little too long, especially without anything besides the beat supporting it. Choa has some fantastic ad-libs, but they aren’t integrated into the mix in a cohesive way. Instead they litter the entire second half of the track at various intensities, causing them to lose impact. Save Jimin’s rap, these are all minor issues, but they show that a little more effort on the side of the production team could have made the track even stronger.

Unfortunately, what should be a pretty solid comeback falls on the heels of a “scandal” involving members Jimin and Seolhyun, who rather ignorantly mis-recognized various important Korean historical figures on a recent episode of Channel AOA. Even more unfortunately, they made the mistake of using Japanese nicknames for them. The way initial criticisms were handled by FNC only seemed to add fuel to the fire and now it seems the witch hunt taking place online will probably overshadow the merits of this comeback. It’s a shame, really. With the way the scandal was managed and the way that the company continues to market AOA, I have to wonder what exactly is running through FNC’s mind these days.