Cube Entertainment has had a lot to handle. With the disbandment of 4Minute, the departure and re-signing of Hyunseung, the dissolution of the original Beast, and managing BtoB, CLC, and Pentagon, they’ve had a lot to juggle. However, it’s time to kick back and groove with their newest unit, Triple H, made up of Hyuna and Pentagon members Hui and E’Dawn.

Initially hailed as Troublemaker 2.0, the trio makes their mark on the scene with a funk-inspired, very Bruno Mars-esque song, “365 Fresh.” While the most noteworthy lyrical content is the earworm of a chorus, “I’m 365 so fresh,” the 15+ rated MV pushes the boundaries of just what is acceptable content for minors. Though the video echoes much of the concept trailer for Hyuna’s 4th album, Triple H takes the concept of devil may care and throws it to the wind, with each member putting their own twist to a much bigger story.

The video starts at the end, with Triple H joy riding while being chased by the police. We then rewind to see how they all got together, starting with Hui’s story. We watch him get chased down an alley before getting cornered by a group of thugs and beaten up. Hui actually seems to be enjoying the chase and even eggs his abusers on with a smug expression once they catch him. Even after he’s been beaten up he doesn’t seem fazed by anything. 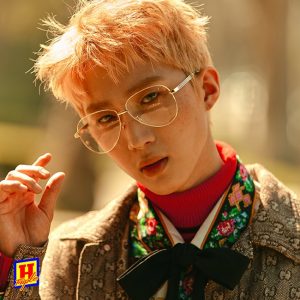 Later, he drunkenly hits on some girls in a club, only to show that it was a ruse to steal their keys and take their car on a grand adventure. It’s while he’s cruising that he’s comes across Hyuna. Now, Hyuna is in some serious trouble. She’s just caused a man to die, though it was an accident and in self defense. She’s on the run and Hui takes her in without asking questions, going so far as to give her a towel to clean herself up. As the two ride in silence, a figure steps into the road in front of the car–E’Dawn. Hui gets out and starts beating up E’Dawn, showing the first bit of emotion we’ve seen from him throughout the video. Meanwhile, this is just another one of E’Dawn’s attempts to kill himself.

The three arrive at a gas station and discover the trunk of the car is full of money. Like any sensible trio of young adults, they decide to blow it. The next scenes are of the trio partying, in various clubs and hotels–basically they’re having a living spree. There’s even a shot of a threesome that has caused quite a stir in the comments. They have a seriously good time until it all catches up with them in the end. The video loops around to the scenes we saw in the beginning of the MV, where Triple H is being chased by the police. Instead of being taken to jail, they join hands and the jump off the roof, the video ending with them smiling and laughing with each other as they fall and the credits roll. 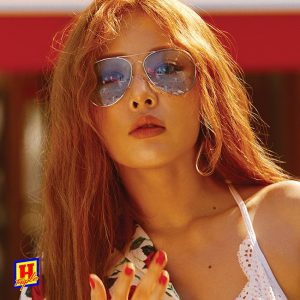 It all seems like a grand adventure, a la Bonnie and Clyde or Thelma and Louise, but the MV goes beyond merely shock value or glorifying partying, drugs, or sex, like many have argued. Each member of Triple H is going through something. Hui has issues with expressing himself. He has no problem with self-destructive behavior, but showing that he’s hurt or that he cares is foreign to him. It’s evident by the blank look on his face after he’s been left in the alley. His facial expression is blank in reaction to the blood all over Hyuna and he keeps it that way even when he hands her a towel to clean herself up. Even during the party scenes he is separate from the others.

Hyuna’s scenes show vulnerability. What happened to her is not uncommon. In fact, a Google search will bring up dozens, if not hundreds, of cases of women who accidentally killed an attacker. And Hyuna’s reaction is very organic too. She knows that she didn’t mean to make the man hit his head and die. It was an unfortunate accident. But it’s all just so convenient that she knows that no one will believe her if she tells the truth. So she tries to hide it and run away. It’s a sad but real truth that women live with all the time. The evidence would have been doubly against her because she is so provocative. Instead of trying to fruitlessly plead her innocence, she gets the hell out of Dodge, and finds herself with people who understand because they have their own demons. 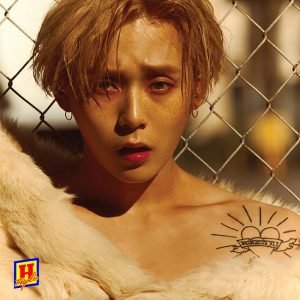 Demons are something E’Dawn knows much about as his whole introduction was of him trying out various ways to kill himself. There’s been a push recently in K-pop to bring to light mental illness and the stigma surrounding it, and E’Dawn is definitely showing the struggle. There is something off with E’Dawn. He is simply too willing to off himself and the number of ways he attempts to go through with it is kind of frightening. He may have been playing around with telephone cords and plastic bags in his room, but that was more of an outlet for frustration than actually trying to hurt himself. His final attempt–stepping in front of Hui’s car– shows just how committed to this path he was on. It also shows that he wanted it to be over in a way where he didn’t have time to think about it. He ripped open the plastic bag before, but getting hit by a car is generally a quicker way to go than suffocation.

The main thing to take away from this is that each member of Triple H was alone and suffering, but together they found something to live for. They didn’t “fix” each other. No one was magically healed of their mental or physical trauma. None of them were suddenly able to cope with their environments. They all engaged in more self-destructive behavior…but together they were able to be more complete people than they were apart. Their collective damage made them able to relate to each other on a deeper level and thus created a bond that made their last adventure something worthwhile. It’s implied that they all died in the end, but before they did they brought a little bit of happiness to each other’s lives.

“365 Fresh” isn’t the freshest song. Triple H doesn’t put enough of their own flavor into the song to make it sound less generic. However, the MV is cinematic gold and each member deserves recognition for their acting performances. The chemistry between the members is solid and hopefully the same amount of thought and attention to detail will be put into future endeavors.