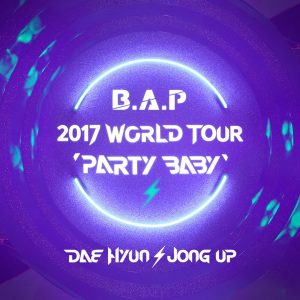 When it comes to B.A.P and subunits, fans have been clamoring for something new from TS Entertainment. While it’s not the Bang & Zelo reunion some were hoping for, the surprising summer project album “Party Baby” — derived from the name of their latest world concert — features two of the group’s vocalists, Daehyun and Jongup. The tracks on the special album are studio versions of the solos previously performed only live, Daehyun’s “Shadow” and Jongup’s “Try My Luck.”

We start off with Daehyun’s track “Shadow.” The song surprisingly leans more towards a dance track than the ballad that would be expected of the powerhouse vocal. But don’t let that confuse you. “Shadow” allows Daehyun to show off a lower range instead of the typical high notes and falsetto we’ve been hearing from him of late. That’s not to say we don’t get a few of those near the end of the song, but it’s nice that his vocal cords get a rest. It’s unexpected though still fun, and comes with the perfect bit of personal touch that comes with writing your own song.

I can’t forget your special color
Your rouge that is on my shirt
Even if I erase and throw it all away,
I end up finding you again

Maybe there’s been some heartbreak in Daehyun’s life because he’s obviously feeling hurt over a girl he can’t get over. Her memory follows him like a shadow, hence the title. It’s like she’s always there with him and nothing he does can get rid of her.

The addition of member Zelo also adds an element to the storytelling. It’s one thing to be wallowing and feeling down in your heartbreak; it’s another thing for another person to articulate how you’re feeling in a different yet still similar way. Zelo’s rap also helps in breaking up the vocals. Daehyun does his own short rap during the breakdown, but Daehyun has a powerful voice. Even when he’s not using it to the fullest extent, it can become too much. Bringing in the other artist keeps Daehyun from overpowering his own song.

Then we move on to the second track, Jongup’s “Try My Luck.” If you were lucky enough to see this live then this studio version was definitely a present. “Try My Luck” is heavily R&B influenced, giving off both Trey Songz and Chris Brown vibes. We get to fully appreciate the Jongup’s growth with this song, as he not only has a solo after getting only two or three lines per song, but he also participated in writing the lyrics for the song. 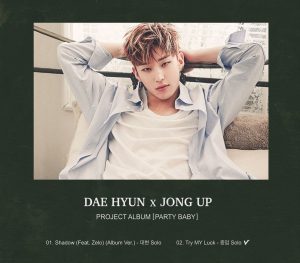 While Daehyun lamented a broken heart, Jongup is on the prowl. The song is sensual, sexy, and quite frankly, there’s no surprise that at least one of the broadcasting companies banned it for lyrical content. “Try My Luck” is exactly what you would expect, a bold declaration of attraction and seeing where the night will lead. He sees a girl he likes and he’s taking a chance on pursuing her, the song expressing his feelings towards their flirtation. It’s direct without being raunchy, sexy without being sexual, and all around encompasses a finesse of seduction that you wouldn’t expect from Jongup of all the members.

From a group more known for hip-hop and even rock-inspired numbers, the two tracks on this project album help to showcase the range of not only the individuals involved, but also the potential for B.A.P as a collective as well. However, as much as it pains me to say, Party Baby is a bit of a disappointment. Having seen and heard both songs live, the anticipation for the studio versions was high. When the project album was announced, I was as excited as every other fan. B.A.P doesn’t do solos or units very often so there was a lot of excitement surrounding this project, yet for it to only contain two tracks that are already pretty well known in the fandom is a bit of a letdown. 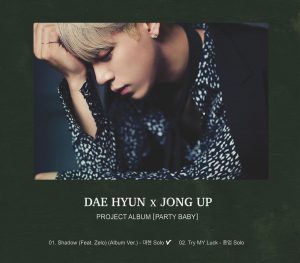 No, Party Baby isn’t necessarily just for B.A.P fans. I understand that. But this was a huge missed opportunity. The two vocalists here show that they can produce and write. Their styles are diverse from each other and from their group. This was a chance to entice new people into the fandom and bolster the spirits of long time fans, yet TS didn’t take that chance. Maybe they didn’t want to gamble on self-produced tracks from first timers. Maybe there was a simple lack of material. Whatever the cause, Party Baby lacked substance. From the teasers to the album cover, everything was set up to be an epic start of summer comeback for a duo from B.A.P, and then we don’t even get a duet out of the mix? At least with Bang & Zelo there were proper interactions and promotions. For Daehyun and Jongup, they each get a week on music shows and hype themselves up on social media. The entire concept of the project unit and album just seems wasted.

That shouldn’t deter you from enjoying the album though. Daehyun and Jongup put in a lot of effort to show us a new side to themselves and that work should be appreciated. Furthermore, the album is sold. “Shadow” gets stuck in your head and will have you singing “tell me now” all day, and if you’re in the mood for a slow jam then “Try My Luck” is there for you. Who knows, maybe listening to the song will give you the confidence to approach someone new. All in all, while I can’t give Party Baby a high rating simply because my fangirl heart wants to, it’s still an engaging album that is hopefully just a kick off to bigger and better things.