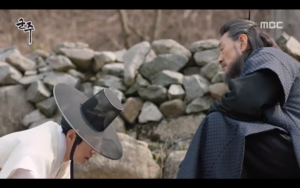 Things are heating up for us with Ruler: Master of the Mask and it’s about time. We’ve hit the halfway mark of this drama so for this week’s review we’re going to talk about a little bit of everything from character development, plot points, acting, and predictions for the second half of the series.

This review contains some spoilers for Episodes 17-20. We kindly ask that readers use spoiler tags in the comments when discussing the episodes that have yet to be reviewed.

The existence of the Pyeonsoo-hwe and their method of control via poisonous flowers have been the only consistent plot points of the series. Dae Mok and his band of followers have shown to be relentless in their pursuit of keeping power over the throne of Joseon. They have beheaded two kings, poisoned a Crown Prince, and put a puppet ruler on the throne, not to mention privatized the nation’s water supply. It is well established that they are the bad guys and that our Crown Prince must quickly come into his own in order to defeat them and gain the true power of Joseon, becoming the great King he was prophesied to be on the day of his birth.

Besides the scheming of Dae Mok, however, we have little to go on in terms of plot. The details of “mystery” for our main characters to solve are already known by the viewer. The outcome of the love triangle (or is it a square?) will surely follow the well established tropes. Lee Seon will not be allowed to stay on the throne, the Queen’s relative will have some penance to pay for double crossing the Pyeonsoo-hwe… the list of predictability grows the more you think of it. The drama has amazing potential for twists, yet its continuous reliance on cliche is holding back the plot. 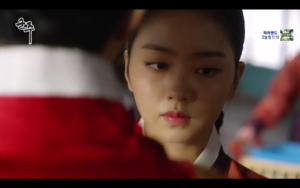 And the acting is spotty as well. The main characters–Lee Seon, Ga Eun, and Crown Prince Lee Seon–are sometimes outshined by the minor characters. Lee Chae-young as Mae Chang is brilliant, and she’s the character we currently know the least about. Heo Jun-ho plays the most believable villain in a drama that I’ve watched in a while. And even Bae Yoo-ram (Park Moo Ha) is loveable and funny and loyal. They feel like people. Yet, Kim So-hyun and Yoo Seung-ho as Ga Eun and Chun Soo/the Crown Prince are supposed to be in love and I can’t believe it. She’s supposed to hate the King that killed her father, yet her stoic expression as she dresses him looks more like bored than loathing. There’s a detachment that hangs around her scenes, as though she’s not quite all the way there in the emotion. The only time I’ve felt sympathetic toward her was her father’s execution and that was a dozen episodes ago.

Lee Seon, our fake King, was introduced as a hot-tempered young man, but between the death of his father and his induction into the Pyeonsoo-hwe, he’s lost all fire. We get brief glimpses of it in the form of jealousy over the bond between Ga Eun and the Crown Prince, but for all intents and purposes, he’s become a snivelling coward. He doesn’t have the mind for revenge he had as a peasant. And this sudden all encompassing fear is such a complete change from his initial showing that it’s hard to believe. 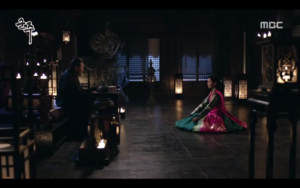 On the other hand, we have Hwa Goon, who initially showed copious amounts of strength of will and continues to do so. She first snuck her way into the Crown Prince’s greenhouse, seeing his face and avoiding getting killed for it. She helps him get to the beheading of Deputy Magistrate Han, though it hurts her to see him grieve for Ga Eun. When her grandfather’s scheming leads to his apparent death, she cuts all ties with him and starts her own way. When her love shows up again, she helps him thwart her grandfather’s plans. She even sells her soul to the Pyeonsoo-hwe in order to buy his protection. She is a woman willing to do whatever it takes to get what she wants and with Ga Eun playing the role of damsel, it’s nice to have a strong-willed female character to round out the group.

That’s not to rule out Mae Chang, whose past as a child working in the Pyeonsoo-hwe’s flower fields has just come to light. Not only that, Mae Chang really is a spy, not for a court lady as we were previously led to assume, but for her father, the Chief Eunuch, who seems to have his own plans regarding who is on the throne. He said himself that “The King is invisible.” Whether that means that his position is stable regardless of who sits on the throne, or if he is working for higher powers, the fact that he strives for himself and his daughter to stay neutral while also gathering information speaks towards less than peaceful motivations.

We still have 20 more episodes to go, with the issue of the Crown Prince’s poison immunity and the revelation of Lee Seon as a fake King still to come up. We have two big issues on the horizon, the first of which being the flower fields. Hwa Goon’s father has asked for stewardship of the flower fields. With Yang having escaped from them so recently, this can’t be a coincidence that this is coming up now. The Pyeonsoo-hwe’s power source may soon be in jeopardy but this may also lead our Crown Prince towards the tool to stopping them. 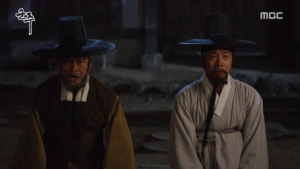 The second issue is the impending war the Crown Prince must decide on. He can either behead everyone in the Pyeonsoo-hwe and start a civil war, or use more subtle but less timely measures. The Crown Prince has been notoriously reckless, with past decisions leading to the deaths of many already. Will he make the right choice? That’s the unfortunate cliffhanger we were left on.

There’s much to wrap up on the road to the Crown Prince reclaiming his throne and defeating the Pyeonsoo-hwe. Readers, what are you hoping to see happen in the second half of the drama?