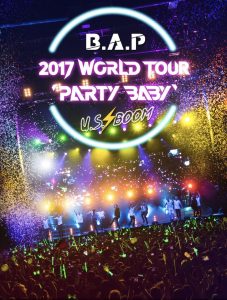 Come hell or high water– or thunderstorms, flash floods, and tornado warnings– no amount of rain could dampen the spirits of those found in the Cobb Energy Performing Arts Center in Atlanta, GA the night of April 6th. The screams, the sheer excitement…nothing could match the feeling of anticipation as BABYz stood, armed with their Matoki lightsticks and whistles, waiting for the lights to go down. It was about the begin–the first show of the Party Baby tour. B.A.P was in Atlanta for the second year in a row and we were ready.

The lights went down. Everyone was on their feet. Screams and whistles filled the air. Atlanta Boom was a go. On stage was the opening act: DJ B.Shoo with some awesome EDM mixes that had everyone jumping. All that nervous energy was funneled into dancing in the aisles and checking phone settings for optimal picture taking mode. The countdown began. 100…80…down and down until the final 10 seconds. Then B.A.P appeared on the screen, the screams getting louder as the intro played and each member’s face came up. The tension was thick enough to cut with a knife and then, with an explosion and the piercing sound of whistles, the six members of B.A.P were on stage, live and in person.
Through eight songs, the group danced and sang to the delight of all gathered. Even the parents who were there as chaperones were diligently recording while trying not to dance around too much. Finally, the lights came up and we heard the words we’d been waiting for: “We are B.A.P, Yes Sir!” The crowd ate it up as the introductions moved forward and the members did their best to pump everyone up in English. Himchan wanted to know if we all enjoyed he remixes of songs like “Hurricane” and “Bangx2”, while Daehyun and Youngjae joked around to make everyone scream. 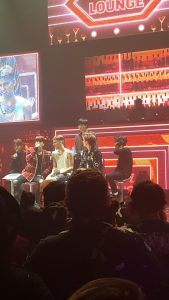 The concert moved along to the event everyone was most anticipating. For every stop, a member would pick a “Best Dressed” audience member, based on a predetermined dress code, to win a special prize. Youngjae was the member to choose for the “home party” look. To everyone’s surprise and delight, a lucky fanboy was picked to come on stage. Youngjae’s reasoning? The fan was dressed the way Youngjae dresses in the dorm. Youngjae recorded a video message and the fan received the SIM card, along with getting to take selfies with the group (sans Jongup who was preparing for his solo stage).

Speaking of solos, B.A.P really put some amazing effort into the solos. Jongup’s “Try My Luck” was accentuated by perfecting mood lighting– blues and purples that went with the R&B vibe, while Zelo‘s all English solo “Shine Like A Star” was backlit like the night sky. The slow jams section–including “Fermata,” “I Guess I Need U,” and “Body & Soul” kept the lighting low and let the music speak for itself. Youngjae and Daehyun rounded out the solos with “Lie” and “Tell Me Now” respectively.

The party picked back up with “Skydive” and “Young, Wild, and Free,” renewing the energy of the entire the building. Sadly, this was just a tease, as the group announced it was time for the final track, “Wake Me Up.” The crowd 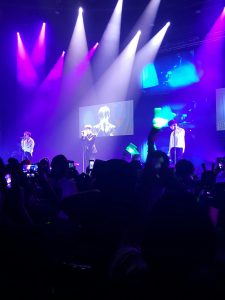 responded with a resounding “No” which caused the members to laugh, but they went straight into performance mode when the opening notes started. The venue echoed with the perfect fanchants of the audience for the last four minutes of the show.

When B.A.P cleared the stage, BABYz didn’t move an inch, chanting for an encore and screaming for more. Soon after, their wish was granted as the members filed back on stage, changed and ready for a few more songs. They taught everyone the “Check On” dance and spent the rest of the encore playing around on stage.

The real goodbye came much too quickly. The crowd refused to let the moment die, screaming as hard and as loud as they could whenever each member tried to speak. Yongguk and Himchan in particular had to pause to let the screams die out long enough to finish their ending speeches. It was especially nice hearing the crowd cheer for Yongguk as during the show he appeared disconnected. Maybe it was, a combination of the weather and, as Youngjae mentioned, jetlag, but by the end of the night he seemed in better spirits, which I’m going to attribute to crowd support.

Atlanta Boom was the first concert where I can say that I finally understood artists saying they feed off the crowd. The beginning of the concert felt stiff. There was nothing wrong with the performances but, probably due to aforementioned factors, the first half just felt off. But after the first talk section and the crowd letting B.A.P know that they weren’t going to let the weather get them down, things picked up and made for an awesome show. By the end, even B.A.P was reluctant to go and they waved and smiled as much as possible during “B.A.B.Y”. 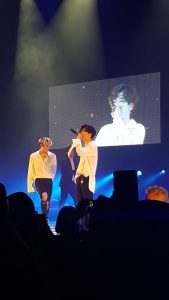 When the lights came up and the announcement about fan engagements started, it was like stepping into another dimension. The whistles were gone, the music had stopped, and it was just a group of fans with glow sticks and signs, chattering excitedly about what had happened just moments ago on stage. Through a hi-touch that happened much too quickly, the boys smiled at each fan, making everyone feel special for just that little moment.

Everyone forgot about the storms until they walked outside into the lightning and thunder.

Overall, B.A.P’s Atlanta Boom was a great kick-off to the rest of the tour. Though the “more interactive” part of the show wasn’t quite as advertised, the performance and energy of the show more than made up for it.

Were any of you in the concert as well? How was your experience? Tell us below!