Love Blossoms in Taeyeon's "Make Me Love You" 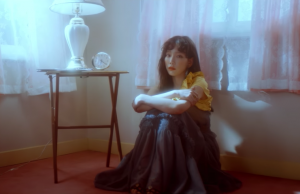 There’s little arguing that Taeyeon is at the top of her game, if not the top of the idol industry. It was just last month when Taeyeon dropped her first full solo album My Voice and its lead single, “Fine.” The work marked another turning point in her solo career, and made clear SM‘s plan to capitalize on her talent as much as possible. Through My Voice, Taeyeon presented her vocals in every facet, and the more subdued lead single served as a nice neutral ground to the larger narrative of the album.

This week, Taeyeon returned with the deluxe repackage of My Voice, and yet another captivating single, “Make Me Love You.” If “Fine” was a somewhat melancholy anthem to trudging forward in the wake of heartbreak, “Make Me Love You” becomes its epilogue — a song all about the hope of a blossoming new love in the wake of fear and insecurity. SM is never one to let seasonal trends pass them by, and the MV makes the most of the lyrics to create a visually stunning narrative of spring.

In “Make Me Love You” Taeyeon sings of a love that takes time to grow, a love that she has to overcome her own insecurities to face head on. In the MV for “Make Me Love You” that sentiment is translated into a visual metaphor where Taeyeon herself is a reluctant spring blossom who has to be nurtured by the light she shies away from before she can truly grow. In all her ruffles and pastels, she sits in the rose garden, gradually being brought to life by the sun — and she doesn’t do so without weathering a storm or two.

SM certainly didn’t go easy with the metaphors, so it makes sense that when analyzing the MV, a few cheesy seasonal sayings are bound to pop up. The first of which being, there’s always a calm before the storm — and that’s exactly where “Make Me Love You” begins. Taeyeon’s vocals start on an almost sombre note in the flower garden, the darkened hallways, and an empty room. She looks peaceful, but underneath her stoic expression, there’s trepidation in her gaze, and a loneliness in her wandering through the sets.

Shadows come from the light in the darkness
In times that are even lonelier
The hand that was carefully held out
I couldn’t hold it, I’ve only hesitated but

My heart already trembles, I keep getting scared
On this night when you secretly held out your hand

As the sun begins to shine through the windows around her, Taeyeon is drawn to the light. But there’s something holding her back from completely embracing it — perhaps her own fear — and she draws the shades shut in an attempt to block it out. Yet through the first chorus and second verse, the persistent light continues to break through and transform Taeyeon. Like a flower, she slowly chases the sunlight by turning her head towards it, following it with her gaze. The light becomes her ray of hope, she appreciates the flowers around her, and she smiles.

Now it’s time for the another over-used expression we all know: April showers bring May flowers. This saying serves to remind us that spring is not only a season of beautiful new life, but also of heavy rain. It’s a tumult we must endure to appreciate the changing beauty of the world around us. As the track picks up energy in the second chorus, Taeyeon’s higher range hits like a boom, and the storm that’s been looming finally breaks. In the evening darkness, Taeyeon rises from the floor of her room and is now surrounded by artificial flickering lamps to supplement her need for something — someone — she avoided before out of fear. Without that ray of sunshine, she folds in on herself, quite literally. As the storm continues around her, she waits for her sunlight to come again. 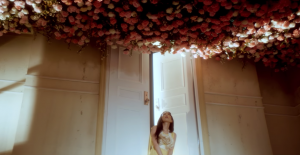 Taeyeon longs for something she didn’t know she needed; something she didn’t know she’d wanted until she watched it slip through her fingers as the sunlight gave way to another evening of rain and lightning. But, as they say, absence makes the heart grow fonder. When the thunderstorm finally lets up, the flickering artificial light fully gives way to natural light. The flowers around Taeyeon bloom even more, and she smiles fully, radiantly. Sunlight streams in through the skylights, and flowers blossom from the ceiling of the marble rooms that once held her captive in her unease. She’s no longer being trailed by the camera in the hallway, instead, it is Taeyeon running towards it, welcoming it with a reassuring smile. Like the blossoms around her, Taeyeon opens up to the light.

The fact that the MV ends at dawn, with a light rain falling behind Taeyeon while sunlight continues to stream through the windows is perhaps my favorite feature of the MV. “Make Me Love You” is not simply saying that she’s letting the darkness pass and looking to the beauty of the future. Rather, Taeyeon has weathered the storm, she has grown through it, and in this spring of her life, she is ready to chase rainbows, to be happy again. That happiness comes with the acceptance that the darkness will return — just as evening falls every day for blossoms growing towards the sun — and she embraces it now that she has the sunlight to look forward to each day. 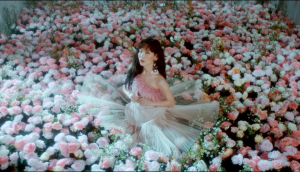 SM’s concept development and visual execution in “Make Me Love You” deserve attention for the way they’ve taken a simple — perhaps cheesy — concept and transformed it into something beautiful and interesting. The visual metaphor of “Make Me Love You” succeeds largely in part to the little touches that visual directors thought to include, like the pink lace that surrounds her body in the garden like petals, the ruffles of her sleeves that add a floral touch to the marble hallways, and the earrings that fall from her hair like pistil and stamen of a flower. The use of light, both natural and artificial, also add something that went beyond beautiful aesthetics — it creates a narrative that brings the lyrics to life.

Taeyeon has received more than enough accolades for her vocal performances, and “Make Me Love You,” although not her catchiest ballad, is performed with deep emotion and understanding of the content. Her voice is unsure in the introductory moments of uncertainty, and fuller when she beckons the listener to draw her out of her darkness. She is a vocalist who understands how to emote — how to sell the sentiment of a song — and “Make Me Love You” builds to a satisfying climax with the layering of her vocals against a steady beat.

“Make Me Love You” capitalized on many seasonal trends — visually and musically — but they paid off because they’ve created a whole that’s greater than the sum of its parts: a simple, but moving narrative with aesthetics galore. It’s not the strongest single, nor the best SM music video, but the content is enough to make you think, and make you appreciate the attention to detail that went into this release. “Make Me Love You” lyrically is obviously about romantic love, but I think the metaphors of the MV extend beyond romance. The MV is about growth, about finding comfort in oneself, in the beauty of the world around us. Overall, that makes it a much stronger release for me than if I had only heard the track alone, and makes it another exemplary release from Taeyeon.