Baekhyun Charms in "Take You Home" 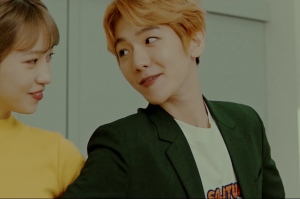 Spring is upon us, which means it’s seasonally appropriate to be inundated with sweet songs about budding love accompanied by shy smiles into flowers. Saccharine spring releases are nearly compulsory at this point, which is why it’s no surprise that SM Entertainment chose Baekhyun for the latest SM Station Season 2 installment, “Take You Home.”

With SM Station, SM Entertainment has the chance to slowly introduce their artists as soloists in a way they’ve never done before. Exo‘s Baekhyun fits the bill perfectly as an artist who has the vocal capabilities and popularity to carry a solo, but he needs time to find his niche without distracting from group activities — and that’s where SM Station comes in handy. In “Take You Home” SM and Baekhyun have honed in on a style that suits Baekhyun’s musicality and marketed personality. He has the charm and the vocal ability to carry what otherwise may have been a cheesy release with confident grace; and with his second solo single, he doesn’t disappoint.

In “Take You Home” Baekhyun takes on the role of an admirer who watches the object of his affections go through heartbreak. He isn’t the one she loves, but he wants to comfort and reassure her all the same.

I’m not the one that’s yours,
but even if I can’t hold you right now,
I’m a man with a big heart
who can protect you and stay by your side.
I’ll take you home,
just lean on me.

There is some element of the nice guy who’s been friend-zoned in the lyrics. Baekhyun isn’t going to make his move just yet — he understands her heart isn’t ready — but he wants her to keep an eye on him. Maybe someday, she’ll realize that he’s the kind of man who can support her and love her the way she deserves. A part of me wants to call foul on the lyrics, because the narrative of the nice guy has been over-glorified and feeds into a larger narrative of a man deserving a woman’s affections simply because he’s been patient. However, the way Baekhyun sings the song is too sweet, to genuine, to really feel that “Take You Home” is anything more than an honest confession of support — with a hint of cliched pining. 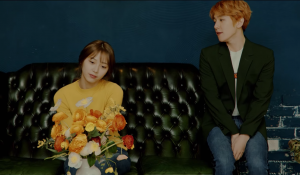 In the MV, we watch Baekhyun follow a woman around her apartment. She can’t see him, but he watches her intently. He observes the dejected slump of her shoulders, and tries to make her appreciate the scent of the flowers before her. He lingers by her side even when she is blind to his infatuation. Though she’s moping, Baekhyun smiles at her encouragingly, letting her take her time to warm up to his invisible presence. Then, when he thinks she’s ready, he snaps her out of her loneliness and encourages her to dance with him. It’s silly, cute, and oh so cliche, but Baekhyun has the charisma to make it work.

There’s a brief moment of happiness before Baekhyun’s daydream ends, and the MV closes with him alone, clutching the flower he admired in place of the woman and the postcard she once held in her hands. In the end, the MV was Baekhyun’s own daydream — his own fantasy that if he stood by her side long enough, she would smile at him the way he’s always imagined. That’s not really how things work out, and maybe a part of Baekhyun realizes that, but he’s willing to stand by her side regardless.

Musically,”Take You Home” echoes the mid-tempo sweetness that made “Dream” so successful. Only instead of having a female partner like Suzy to tackle the higher notes, Baekhyun covers both ranges with a surprising finesse. I’ve always been a little irked with how SM forces the powerful high notes on Baekhyun when his vocal capabilities are not the best at supporting them. His higher range is much more comfortable in a soft falsetto — which, thankfully, is exactly what “Take You Home” builds to. Thusly, Baekhyun can keep his vocals soft, allowing the natural breathiness of his tone to shine through.

I can’t speak to how much post-production went into his vocals, but “Take You Home” sounds comfortable for Baekhyun — it sounds like a good fit. And in that comfort, we can hear him clearly sing with his natural charm, with emotion as opposed to forced dynamics. There’s cheekiness in the lows of the chorus, and a pleasant balance of longing and sweetness in the higher notes. Baekhyun’s voice — despite what SM tries to market — sounds best in the fuller, low ranges than in the higher ones, and “Take You Home” provides plenty of such moments. The lowest notes at the tail end of the chorus hit the spot so nicely that they unintentionally become the hook of the track, and it’s those lines that are sung with the most convincing sentiment. 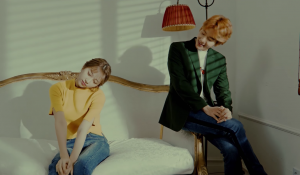 Overall, Baekhyun may not be completely ready for a solo career just yet, but with “Take You Home” SM have shown that they — in some way — understand the strengths of Baekhyun’s musicality. More than anything, they’ve demonstrated that his tendency to over-act is best suited to sweet smiles and adoring gazes accompanied by charming lyrics. “Take You Home” makes for a seasonally appropriate release that may not bring anyone new into Baekhyun’s — nor Exo’s — fandom, but will certainly fare well with his fans. In that sense, I’d label the release another success for SM Station.