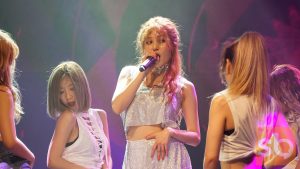 Hyuna’s North American Tour, oddly advertised as “The Queen’s Back,” is actually Hyuna’s first time touring North America (though she did perform at SXSW in 2014). San Francisco was Hyuna’s 7th  in a grueling 8-stop tour that brought her from the Pacific coast to the Atlantic coast and back to the Pacific in just over two week’s time.

I’m admittedly a big fan of Hyuna and, even though I came in with a rough idea of what to expect, I was pleasantly surprised and baffled many times throughout the night. The performances were great, and while much can be said about Hyuna as a performer, there’s not much to say that hasn’t already been said. Instead, I’m going to focus on the little things — the unexpected, the spontaneous, and the offkey — that made the night extra memorable. 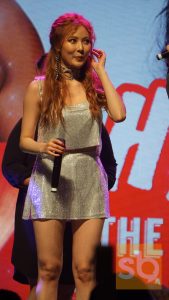 Before the show began, there was a long delay that had fans waiting outside for over an hour. The doors were supposed to open at six but, due to some problems with the stage, fans weren’t allowed to enter the venue until a quarter past seven. I understand that there is likely very little humor in this for the hundreds of people who had to endure the cold and the barrage of colorful personalities that awaited many concertgoers in the dark alley in which the line assembled. And more so for those who had already been waiting for hours, which was pretty much everyone who attended since even the lower tier tickets didn’t have assigned seating. And even more so for those who ventured over to the Starbucks a block away in hopes of being able to use the bathroom only to discover that it was out of order. Let’s acknowledge how not funny any of this was…while the rest of us try not to laugh.

But eventually the issue was fixed, the doors opened, the opening act was rushed on stage, and the show went on without a hitch, right? Not quite.

Despite the long delay, the show started rather promptly. Once everyone rolled in, Hyuna came out on stage and started performing “Roll Deep” when, all of a sudden, the entire soundstage completely cuts out in the middle of the song! It’s always interesting to see this phenomenon on fancams and compare how different idols handle it. But it’s a whole other thing to see it happen live. 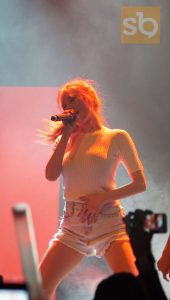 I really admire how Hyuna dealt with the sudden blackout. It’s difficult for any artist in this situation but she handled it with a ton of grace and humor. First of all, she stopped performing almost immediately. Some artists will try to power their way through the song by performing acapella and encouraging the audience to sing along. That’s definitely not Hyuna’s style. Instead, she made light of the situation by telling a joke.

Through a translator, she thanked the crowd for being patient for waiting through the delay to get in and being understanding of the technical difficulties. She said that this was the first time she’s gone through a delay like this and also it was her first time having the music stop on her. Then she thanked the crowd for pretending to believe her when she said those things. If the soundstage was able to produce a rimshot joke sound effect at that moment, I’m sure it would have.

After a brief pause, the stage rebooted itself and we got to start fresh from the beginning, making “Roll Deep” the first encore performance of the night.

After performing a few songs, it was time for the Q & A segment. I’m fairly certain this was Hyuna’s first time visiting San Francisco because when asked if she had any of our clam chowder, she made some remark about why she wasn’t able to try it. Had she actually been to San Francisco before, she would have known how seriuosly us San Franciscans take our clam chowder and would at least have pretended to like it.

It’s actually not that good. I hoped she tried our garlic fries, though. 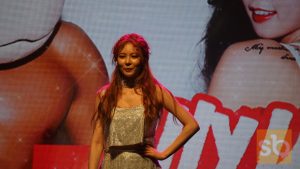 After the whole clam chowder debacle — a super easy layup of a question which she should have knocked out of the park — it was time to field some hardball questions directly from the audience. And, of course, they just had to call on someone who was all the way in the balcony. Little did they know, however, that this person would shout at the top of his lungs, “Do you like black guys?”

It was quite obvious that everyone in the vicinity heard it but the emcee was spectacular at pretending not to hear anything — he didn’t even flinch — and instead he asked her another softball question that I’m sure he’s asked her a million times before. Interesting enough, the surprises kept coming during the Q & A portion. 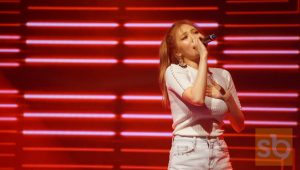 When asked, “What is your favorite K-drama?” Hyuna’s answer was “Have you heard of Goblin?” I’m not sure if she misunderstood the question and thought she was asked “What is your favorite K-pop song?” because “Goblin” is also the name of the single released earlier this year by her Cube Entertainment labelmates CLC, a song which she admittedly had a ton of creative control over. If she really enjoyed watching the drama, it would make sense that she had a hand in converting the drama into the concept and stylings of the song, and even go as far as naming the song “Goblin.”

It’s interesting because “Goblin” came as a complete 180-degree transformation for CLC and it completely knocks off the girl crush concept that Hyuna’s former group, 4Minute, was known for embodying. It was clear Hyuna put a lot of effort into remaking CLC into a junior version of 4Minute. For those of us who were still mourning the senior group’s sudden disbandment, it came as just too sudden. 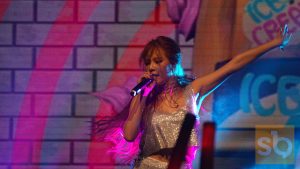 The show went on without much incident until it was time for the audience participation segment which brought on stage a few fans who were more than eager to be up there. After winning some sort of drawing, the first fan who went up there had the gall to flash a 4Minute banner as he was entering the stage. Luckily, Hyuna had her back turned at the moment and he quickly rolled the banner up and tucked it away before she could look over.

The crowd went hysterical for a quick second and I bet she knew in the back of her head what was going on. Whether or not she saw the banner, she could probably tell from the crowd’s reaction what it was about. The Ghost of Christmas Past reminds her of it every year. 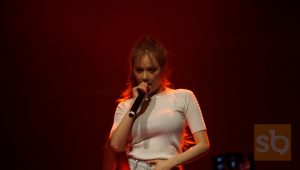 Then came the segment in which five unknowing audience members were brought on stage and forced to compete in a dance-off. One of the contestants was definitely more than ready for this. He likely saw the video of the guy who absolutely crushed it at the Chicago stop and wanted to one-up him by doing a few moves that transitioned into, you guessed it, a backflip. Not surprisingly, it almost went horribly wrong.

The most essential part about doing a backflip is hitting the landing, and this one was far from perfect. The guy landed feet first but, without any balance, he immediately stumbled forward and for a split second it seemed like his forward momentum was going to launch him right through Hyuna. Fortunately, he was able to stop himself before it was too late and avoided what could have been a complete disaster. It was clear at this point that he was not going to win the dance-off. 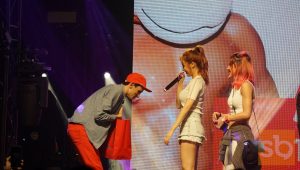 The person who did win the dance-off reacted as if his childhood pet just died. This man was a total mess after Hyuna surprised him with a back hug while declaring him the winner. He fell to his knees and when Hyuna came over to calm him down, he immediately reached for her hand and gave it a kiss. He eventually returned to his feet and Hyuna continued consoling him by giving him his prize, a backpack.

These fan interaction moments ranged from touching to frightening but most of the time it was rather excruciating for those of us in the audience, largely due to the endless parade of…

What do you expect when you allow diehard fans who paid their fair share to be next to Hyuna? They’re definitely going to try and get their money’s worth by getting as many selfies with her as possible. Some were more aggressive than others but Hyuna was nice about it and politely agreed to every request. I almost wish she hadn’t because this really made the audience interaction segment drag out longer than it should have. 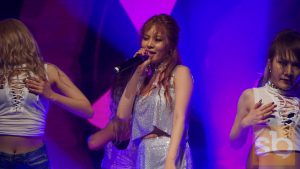 Not that this was a big problem because the concert felt a bit short overall. Despite the delayed start, the blackout, and the restart, the night ended sort of early. The entirety of the concert from when Hyuna went on stage to when she made her final exit was about an hour and a half. I’m not sure if that was the intended running time or if things were rushed to compensate the initial delay, but it seemed rather short compared to other K-pop concerts I’ve been to.

The reason for this is probably because there were only ten songs in the entire setlist. As expected, Hyuna performed her six promoted singles and there was an extended video segment highlighting “The History of Hyuna.” Other than that, it seemed like the show could have benefited from more songs and less…

We all know that Hyuna is in love with the letter ‘A.’ She stylizes the last letter of her name with a capital ‘A.’ Three of her five mini-albums emphasize ‘A’ in the title. Her fandom name is ‘A~ing.’ She probably got straight A’s in school for all we know. But one thing she doesn’t seem to favor as much is the letter ‘B,’ as in she should have performed more b-sides. 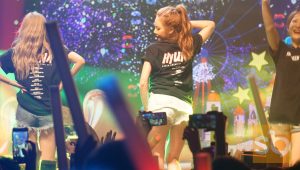 The reason I say this is because she has a bunch of good b-sides and I’m slightly disappointed that she didn’t display these different versions of herself. She did perform the tantalizing “French Kiss” and the heartfelt “U & Me”, but I was hoping for more of her hard-hitting hip hop tracks, such as “Just Follow,” “Blacklist,” and “Ice Ice.” She’s performed these songs on special stages in the past, and even if they are usually with a featuring artist, it wouldn’t have been difficult to work around it. Seeing a hip hop medley that showcased Hyuna’s rapping chops would have made my night.

Despite the surprises, which were mostly pleasant and welcomed, it was a really fun experience. In fact, the awkward and unexpected moments only added to my overall enjoyment. I would like to thank KpopME for bringing Hyuna to North America and working their hardest to overcome the aforementioned challenges with the venue. As I mentioned in the past, female idols don’t often hold solo concerts in North America so I definitely appreciate the opportunity to see Hyuna in my hometown.

Readers, were any of you able to see Hyuna on tour? Share your stories below!