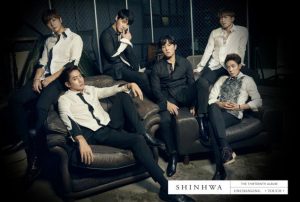 Two days into the new year, and we are already blessed with Shinhwa’s thirteenth album, Unchanging. Scheduled as a two-part release, the first part titled Orange was released last October, and the second part Touch and complete album was newly released just three days ago.  With a total of ten songs — five for each part –, this album delivers variation in style and genre. There’s sure to be a song for everyone!

The first track off Touch is “Heaven”, a lyrical and ear-pleasing ballad. Opening with an arpeggiated piano introduction, the track spotlights on the group’s vocals and rapping parts. The emotional melody coupled with the recurring phrase “falling without you” suggests a sad and melancholic mood. At the climax, “Heaven” transitions to a powerful chorus, as signalled by the strong percussion parts, which really demonstrate the vocal line’s poignant and passionate singing. I especially enjoy Junjin’s deep rap, which adds another element of emotion to the song; but it’s not just with this track, there’s just something about his voice that is simply incredibly captivating whenever he raps or sings. The vocal line also delivers wonderfully with this more technically-challenging song: Hyesung’s high notes and Dongwan’s ad-libs at the climax definitely show that Shinhwa has still got it!

“Touch” is the title track, and it’s my favourite in the entire album. This song falls within the genre of future bass with a powerful bass and rhythm lines. According to an interview with the track’s composer Kim Do-hyun, he calls “Touch” the first title track in the K-pop music industry that is fully in the style of future bass.

For those wondering what exactly future bass is, characteristics of this genre include heavy synth and electronic elements. Certainly, this song not only has a lot of that, but also demonstrates use of glitching, a technique where the rhythm is broken up and effects are added to the vocal parts. As a result, “Touch” features a very modern sound, with many instrumental breaks that are perfect for dance breaks onstage (which is exactly what Minwoo did when Shinhwa performed this song at the MBC Gayo Daejejeon).

What really impresses me about Shinhwa is that they keep experimenting with different styles and types of music. Originally, this song was not written for them, but after hearing it, they insisted on putting it as their title track, despite the risk of their fans not enjoying this relatively new genre of music,. It’s a bold and daring choice that really proves how Shinhwa maintains its relevancy and popularity nineteen years after their debut.

The third track, “Superpower”, features a catchy whistle tune at the beginning that is repeated over and over in the backing instrumentals of the track. The strong and crisp beats, combined with the whispered English introduction, creates a slightly sexy and sultry feel. The lyrics definitely add to this mood: “Let me feel you, let me guide you, right here next to you”. One of the highlights of “Superpower” is the harmonisation at the end of the chorus: “Girl, I like it when ya use ya super power”; it definitely adds to the memorability of the track. Honestly, when I first heard this song, it reminded me slightly of Minwoo’s solo “Taxi” in 2014 with its slightly flirtatious undertones. 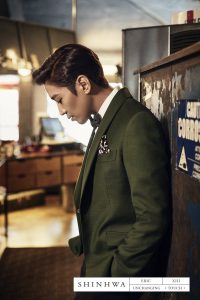 Following the lines of “Superpower”, “Tonight” also starts with a captivating synthetic tune that serves as a recurring motif. This short melodic line sounds a little exotic, which creates an interesting feel combined with the electronic elements of the music. The track is more of an upbeat dance track, with the beat being kept by Andy’s and Eric’s charismatic rapping parts and the flirtatious lyrics like “Baby, come home tonight, love you by candlelight” and “It’s so special tonight”

The final track of Touch is “Bye Bye Bye”, which is an upbeat track that is about moving on from an ex. This is really refreshing, since most songs about moving on from breakups are usually emotional and moving; instead, this track features a bright and laid-back beat. I especially enjoy the chord progression and the stepwise descending intervals of the arpeggiations in the chorus, which definitely creates a memorable melodic line.

All in all, Touch, with its more sexy, and flirtatious sound, starkly contrasts Orange, which features more of a soft and emotional concept. I really enjoy this darker and more mature side of Shinhwa, so it comes as no surprised that this second part of Unchanging ranks higher than the first in my books! The wait was definitely worth it, and I look forward to the MV release of “Touch” as well as Shinhwa’s upcoming promotions!