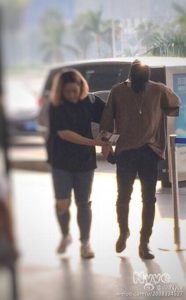 Sasaeng. It’s a loaded term that comes with plenty of negative implications. We’ve all heard the insufferable stories of sasaengs crossing the line: the constant stalking, the breaking and entering, the phone hacking, the menstruation pads, the invasive recordings, the bullying of normal fans, and the general disregard for basic human decency. The actions of sasaengs seem to range from that of an extremely hyperactive fan to that of a hardened criminal. As such, the sasaeng label is just as broadly defined, making it convenient to place the label on any fan who’s viewed as having committed some sort of offense to an idol.

But are we too quick to dish out the sasaeng label to anyone who we feel has overstepped the bounds of the idol-fan relationship? By definition, a sasaeng fan is someone who engages in behavior which may be considered an invasion of privacy against an idol. An invasion of privacy can mean many things, some of which isn’t much different from what we do as normal fans. We’re quick to accuse and demonize sasaeng fans for their inappropriate behavior without first examining our own behavior before we cast the righteous stone.

Please keep in mind that I’m in no way attempting to justify or condone any of the behaviors which are associated with sasaengs. Instead, I want to closely examine the moral gray area where the boundary between a sasaeng fan and a ‘normal’ fan resides. Using the recent incident of Got7’s Jackson, let’s consider how we as ‘normal’ fans may also at times convey sasaeng-like tendencies. 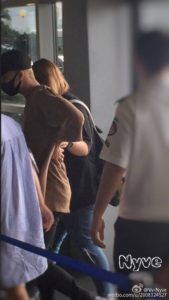 The headlines for this story are simply eye-catching, most of which went something along the lines of, “Jackson Injured in Car Accident Caused by Sasaeng.” We hold our breaths every time we hear that an idol has been involved in a car accident, especially after what happened two years ago. Idol injuries are no laughing matter as Jackson had reportedly suffered injuries last year while filming Dream Team and participating in the Idol Star Athletics Championship. But in terms of catching the reader’s attention, none of the words in this headline can quite compare to the last one — sasaeng. Idols suffer from car accidents and injuries at times, it’s almost an occupational hazard, but rarely have they suffered both at the hands of a sasaeng.

On his way to the airport from his hotel in China, Jackson’s vehicle was involved in a minor accident which caused Jackson to be photographed grimacing and favoring his lower back immediately afterwards. Due to the precarious nature of the incident, almost every media outlet jumped at the opportunity to call this a sasaeng attack and, needless to say, the netizen response to the story was immense. As with any story on sasaengs, the majority of comments focus on demonizing and vilifying the sasaeng, associating the person involved with a litany of heinous behaviors previously committed by sasaengs. 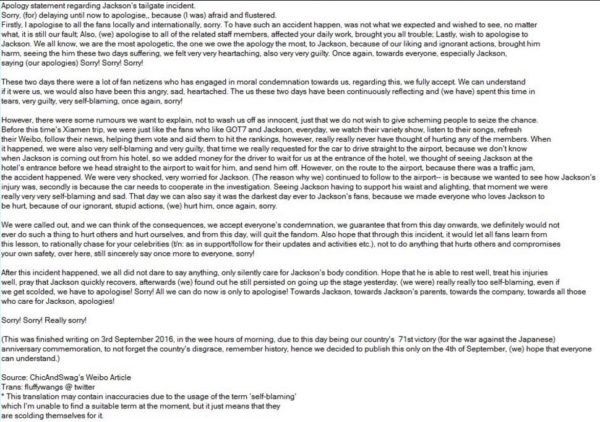 In perhaps the most moving example of an accused sasaeng’s attempt to restore her humanity, the statement provides a lot of insight into the idol-fan relationship which I believe a lot of us can relate to. The first paragraph alone debunks a lot of the myths which are attached to sasaengs.

Sorry for delaying until now to apologize because I was afraid and flustered…To have such an accident happen was not what we expected and wished to see. No matter what, it is still our fault…Also, we apologize to all of the related staff members for effecting your daily work and bringing you all trouble. Lastly, we wish to apologise to Jackson…because our ignorant actions brought him harm and suffering…we feel very very guilty.

This paragraph clearly comes from a place of guilt and repentance. She shares her feelings of being afraid, likely due to the netizen condemnation, and she acknowledges that she inconvenienced other people who were involved, including Jackson’s staff members. This contradicts the assumption that sasaengs are people who disregard basic human decency. By acknowledging her fault and the people she’s hurt in the process, she’s demonstrating an emotional trait which is often stripped from the sasaeng caricature — empathy.

The second paragraph is probably the most telling in terms of understanding her mindset. She attempts to redeem herself as a person by relating her day to day activities to that of a normal fan.

Before this Xiamen trip, we were just like the fans who like Got7 and Jackson. Everyday, we watch their variety show, listen to their songs, refresh their Weibo, follow their news, help them vote, and aid them to hit the rankings.

The behaviors she’s listed are things we consider normal fan behavior. In essence, she claims to have been considered a normal fan before the incident. So what drove her over the edge to become the new face of sasaeng evil?

This is where things get murky in terms of what we consider to be normal and sasaeng behavior. From her account, we can tell that instead of choosing to wait at the airport, she chose to wait at Jackson’s hotel entrance and that she paid for a cab driver to wait with her. One can infer that, upon seeing Jackson leave the hotel, she instructed the driver to follow him to the airport. 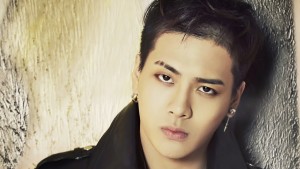 The act of waiting for an idol in front of his hotel or at an airport isn’t generally warranted as sasaeng behavior since it’s become so commonplace and accepted; however, it’s where the invasion of privacy aspect starts to get blurry. There are several elements of stalking which come into play. The fans need to know the intricate details of an idol’s schedule to know exactly where and when to wait. They harass and infringe upon the idol’s right to travel safely and unimpeded. And for some reason, this is considered ‘normal’ fan behavior. There’s even an entire culture of airport fashion which idols must now abide by in order to uphold a standard of grace amidst a fan culture which basically excuses stalking and public harassment as a twisted form of devotion.

However, on the route to the airport, because there was a traffic jam, the accident happened…That day we can say it was the darkest day ever for Jackson’s fans because we made everyone who loves Jackson get hurt.

We can tell from the statement that the person involved did not intend to run into Jackson’s vehicle intentionally, as she was not in operation of the vehicle and she clearly meant no harm to him or anyone else. In fact, she shows great concern for having physically injured Jackson and having caused emotional injuries to his fans and loved ones. She ends the statement by declaring to quit the fandom, urging fans to devote themselves safely and rationally, and again apologizing for her actions.

From her statement, it seems that the only action which separates her from a normal fan was the decision to pursue Jackson in a cab. Asking a cab driver to follow an idol’s car may constitute a more direct form of stalking but is it really that much different from the stalking that’s already taken place in front of the hotel? If it’s permissible to infringe upon an idol’s right to privacy when he’s coming out of a hotel or at an airport, is it that much worse to follow him enroute? In other words, the line between what’s acceptable and unacceptable becomes very gray when considering that the invasion of privacy began long before the two vehicles collided. 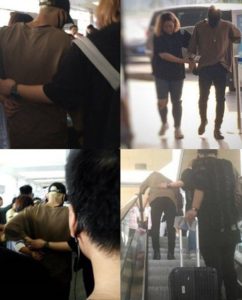 When it comes to judging a fan’s behavior, it’s important to consider intent. Those with truly ill intent will not admit to what they did as being harmful and will attempt to gain notoriety. Similar to how internet trolls are awarded for their bad behavior, notoriety and the lack of enforceable consequences is a primary reason why normal people will commit abhorrent acts. Admitting fault and recognizing the people who’ve been harmed is a very honorable and courageous move which we should commend of anyone. Regardless of whether or not the apology is to be believed at face value, just having the courage to publicly apologize in a sincere manner, without feeling the need to defend or boast about her actions, indicates that her intentions are pure and that they come from a place of true guilt and sorrow.

Yes, what Jackson’s pursuer did may have had sasaeng-like tendencies, and it led to directly harming Jackson, but it’s clear that she isn’t the monster that everyone makes her out to be. In fact, she’s not much different from those countless fans who wait for Jackson at his hotel and at the airport, those who convey his whereabouts to other fans, or those who track his every move on fansites.

It’s important to understand that sasaengs are people too. Some of them may have demonstrated egregious behaviors but not all of them deserve to be treated like criminals. In fact, many of them are just normal people, swept up in a system which encourages outrageous fan behavior. When we place a label on people, it dehumanizes them and allows us to treat them as something less. I’m not denying that there may be ill intent sasaengs out there, but it’s important to acknowledge each person as a human being with thoughts and feelings instead of lumping everyone into one faceless category.