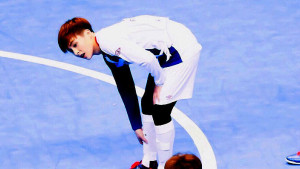 The Idol Star Athletic Championship is an annual event that has been held since 2010. Solo artists, groups, and celebrities participate in various sports with or against each other to earn medals. They take part in a number of a different sports such as archery, sprints, basketball, relay races, wrestling, and many more. And every year, a good number of idols succumb to accidents and injuries. While this year’s event has not yet aired, it’s already known that Xiumin of EXO has been injured playing futsal.

Last year’s event had a running list of idols who suffered some sort of injury: Jackson and Jr. of GOT7, MAMAMOO’s Moon-byul, Block B’s P.O., Oh My Girl’s Binnie, SHINee’s Minho, Woo-Hyun and Sung-yeol of Infinite, Ha-yong, Nam-joo, and Bo-mi of A Pink… just to name a few.

Fans have constantly voiced their dismay against ISAC when it comes to stars sustaining injuries and then continuing their schedules and events despite them being hurt. But in the end, nothing changes and the event is held the next year. The following cycle repeats itself: ISAC is announced, people buy tickets, fans watch and cheer, idols get hurt, people become upset, but don’t boycott, another year rolls around and we’re right back where we started.

While most understand that accidents are bound to happen,  the problem is that too many idols get hurt each year. Needless to say, sports is not their profession, but it doesn’t invalidate the immediate medical care they need when accidents occur.

In a sport, it doesn’t matter if one is a professional or not, there is risk of will injury. The difference is that professionals know the ins and outs of their career choice and know what to do to exercise caution to prevent injuries. But all the knowledge in the world cannot protect a genius from an accident.

ISAC happens every year not only because fans still participate in the ticket lottery to cheer on their favorite idols, but because idols attend because of certain stipulations. According to Super Junior’s Hee-chul, idols are sometimes forced to attend ISAC. 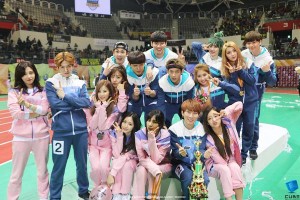 If they don’t, the result ends with them being put at a disadvantage for music shows, which are clearly important to promotion process and the entertainment business. There’s no need to spell out what would happen to a star if they’re unable to promote on a station and set at a disadvantage because they valued their safety over their career.

Let us consider the idols that tend to attend. Most haven’t been in the business for more than five years and may not have gathered a substantial fan base (BTS, VIXX, Seventeen, Twice, April, GFriend, etc.) where they can sustain company profits. Performing on a stage of a different kind would help to improve their image and make them come off relatable to their fans, and in the end, promote their name and increase the number of followers and possible endorsements. By attending ISAC, they’re not going to be put at a disadvantage because of the network (MBC), which in the end, helps them continue to gain popularity despite their physical pain and suffering.

To stop ISAC from happening, an easy solution would be for the fans not to attend. If they don’t, then the network cannot make any money, thus they have no choice to cancel the program for it would cost them more money to have the event take place and make a profit off it. Talking and displaying your anger behind a keyboard helps, but with all talk and no action, the Idol Star Athletic Championship will continue every year just as it has and more and more idols will injure themselves and potentially hurt themselves to the point where it could end their career.

There’s no practical way to make ISAC safer because MBC is expecting idols to perform like professional athletes. 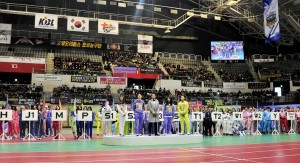 Sure some idols may play basketball for fun on their off time, but not to the point where their popularity and integrity depends on it. Of course, an idol can train for said events (if they even have the time in their busy schedule), but it doesn’t stack up against the experience a professional.

Even if MBC were to lower the quality of a sport or lessen the interaction between competitors, there is no way an accident can be avoided. Dumbing it down is sure to make the event boring to watch and if there are too many solo sports, the competition and teamwork spirit is gone, which is may be why many decide to watch any sport.

An on-hand medical response team wouldn’t make the event safer, but would treat an injury sooner. Lowering the quality of a spectator sport would not make ISAC safer and in fact would cost the network money in losses. Stretching and proper training helps lessens the percentage of injury, but there’s still a risk. Putting the idols in life-sustaining bubbles would make for a humorous spectacle, but there’s only far you can run with that idea.

I believe that idols put enough pressure on their bodies to additionally have to participate in something that’s already not a part of their routine. On MBC’s World Changing Quiz, a doctor who has treated multiple idols within the industry revealed with the amount of stress between dieting, practicing, exhaustion, and overworking, artists run into severe physical issues before the age of forty and internally age quicker than most.

On top of the “nature of the business”, they’re also required to go through other physical activity that is not a part of their “normal” routine? That alone makes the idols more susceptible to injury and long term problems. Even looking as long running groups and idols, the dance routines they perform now do not compare to the intense choreography of those in the past.

Anyone can be injured at any time during their daily life. But to put yourself in a situation that would worsen your physical being isn’t the safest of choices. There’s a sense of dedication idols have to the fans that they are willing to put them first and that’s understandable. But putting more stress on your body isn’t the right way to go about it. And even if an idol doesn’t get injured during ISAC, there’s a chance that an issue may arise in the near future for at that point the idols were moving in ways they’re not used to and using muscles they do not use on a daily basis. 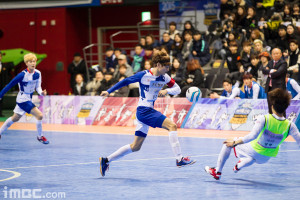 I can understand both sides. I don’t believe the artists should feel forced or obligated to participate in something that could end their career if severe enough. But I also understand seeing your bias becoming relatable to you in playing your favorite sport and it lessens the ‘idol on a pedestal’ ideal – it’s a reminder that they’re someone just like you, just a little popular and constantly in the spotlight. But if I had to choose, I wouldn’t support ISAC. I would rather their safety be  held above all else. And if they want to participate, it should be a choice, not an ultimatum.

What are your thoughts? Would you rather an event like the Idol Star Athletic Championship be cancelled (if possible) or find ways to make it safer but still enjoyable for it to continue to air?