As holidays in Korea come around, special television programs abound. In the land of K-pop, the most prominent one is MBC‘s Idol Star Athletic Championships, or ISAC. Whenever this event occurs, the drama is sure to follow, and this year is no exception. From injuries to fandom dust-up, ISAC Chuseok 2015 stirred up some trouble.

As far as fandom conflicts go, T-ara and their fan site managers caused a bit of ruckus following the event taping. ISAC is a great opportunity for fans and idols to interact, a virtual hotbed for fan-service. During the filming of the wrestling matches, T-ara was located in a section where fans were unable to see them, though reports say T-ara could see the fans. Due to this, the group wasn’t able to interact with their Queens; to which some fan sites took major offense. The fan site managers took to social media to complain about being ignored and even put some of their sites on “hiatus.”

Other Queens spoke up to defend the group, saying they actually were doing fan-service later. The fan site managers’ eye-roll-inducing excuse for not noticing: They were tired because they had been following T-ara around for a few days and had little sleep, so they left the event early. Somehow, they thought playing the sympathy card in regards to an idol group that works a lot harder than the essentially accepted stalkers that they are was wise.

In the end, T-ara was thrown under the bad PR bus by their own fans, despite knowing that T-ara can ill afford any negative attention. The ruckus essentially amounted to the fan site managers behaving like spoiled, entitled brats and then having to apologize.

Internal conflicts aside, the most prevalent downside of ISAC is the injuries. Every year, reports of idols taking spills or otherwise becoming injured come in even prior to the actual airing of the show. This year was no exception, and although there’s a bit of a list, two particular cases gained attention. 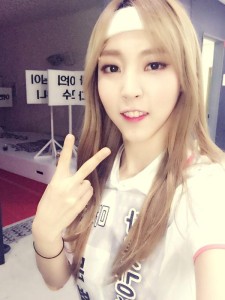 First is MAMAMOO‘s Moonbyul. During a race, while gaining the lead, Moonbyul tumbled face first on the track. Visibly upset and hurt, she was taken off the course by Solar and a manager to receive treatment.  To add insult to injury, the moment was replayed multiple times for those in attendance. This raised concern (given a reportedly previous injury to her face), though she later took to twitter to show she was okay.

Then, there was GOT7‘s Jackson and Jr. During the event, both members sustained injuries (this being Jackson’s second in as many events). However, the attention turned to them full force when the pair was snapped wearing slings and casts while at the airport. JYP Entertainment was quick to say that the injuries were not serious, and simply bruises.  Mark‘s father and most famous resident GOT7 fanboy, took to Twitter to voice his concern regarding the matter, essentially echoing the concerns of K-pop fans. However, it seems GOT7 was relatively fine, since they performed at the NetEase Music Battle soon after. 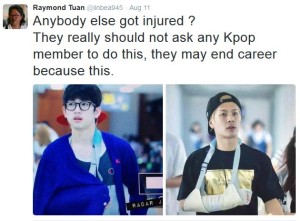 Understandably, injuries are to be expected when pursuing athletic endeavors, rather professionally or recreationally. Anybody who’s ever played a game in their backyard can attest to that. Fans are also rightfully concerned about injuries, since idol bodies are important. How else will they be able to dance and sing day in and day out?

The question remains whether or not the ISAC should continue. What exactly is to gain from these athletic competitions other than perhaps visibility in the mass of K-pop groups? I suppose the chance to be seen on TV will help the “nugu” status, but just because you’re on television for a split second doesn’t mean people will actually start following your career.

The ISAC only seems to truly serve MBC. They manage to gather a group of idols to appear on their station, which means advertising revenue and ratings. Super Junior‘s Heechul also reportedly made statements on War of Words that idols participate in the event to avoid getting on the bad side of MBC – you don’t want to deny, and subsequently piss off, a broadcasting network. While not blatantly forced participation, broadcast networks have power and thus may be coercive in getting idols to attend.

Are idols really voluntarily putting their well-being on the line? Should the ISAC be a part-and-parcel expectation of idols, and thus, they take the risk because doing athletic events is not out of the ordinary? Would the ISAC end if fans stop showing up (a highly unlikely occurrence – fans follow idols everywhere)?