Unbiased Review: MOBB's "Hit Me" and "Full House" are no Knockout 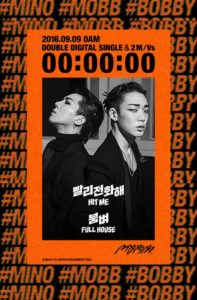 MOBB, short for Mino and Bobby, debuts as an intergroup sub-unit under YG Entertainment. After Bobby then Mino each made their solo debuts and released MVs in consecutive days, the two released two more MVs the following day, marking their official debut as a sub-unit. I admit that I’m a big fan of YG Entertainment and enjoy following most of its artists so, for the sake of an unbiased review, I’ll promise to be as unrelenting as possible in my criticism. Let the nitpicking commence!

It was clear from the survival show Win: Who is Next that Mino and Bobby were the prized possessions of YG’s next generation of idols. Mino was the headliner for Team A, which would go on to win the show and become Winner, and Bobby carried the load for Team B, the losing group which would later get mixed and matched to become iKON. This all begs the question of why YG decided to split the tandem in the first place instead of placing Mino and Bobby in the same group and combining the best members of each group into one super group which would include BI, Taehyun, Seungyoon, and maybe Jinwoo.

The answer is probably that it’s better to have two balanced and highly prominent boy groups, each attempting to target a different demographic, than to have one super group and a bunch of leftover trainees that can’t be monetized. But that doesn’t mean that we can’t catch a slight glimpse of the original plan, which was to have Mino and Bobby be the GD&TOP of the next generation super group. Hence, we have MOBB to answer all the hypotheticals of what could have been.

Looking at the final result, I’m kind of relieved that Mino and Bobby are not in the same group. I’m sure the Winner X iKON super group would have been amazing, but their Mino X Bobby spinoff just makes me miss GD&TOP that much more. It’s a bit of an unfair comparison since both Mino and Bobby are still rather new on the scene, having only been a year or two since their debuts. However, their charisma is at such a deficit when compared to their Big Bang counterparts that it’s almost hard to not draw the comparison. In a perfect world, where MOBB would exist in a vacuum without having to be compared to GD&TOP, I would say this is quite the debut for a sub-unit we were all waiting for. But in the real world, MOBB exists in the shadow of GD&TOP because it’s just so hard to not see the similarities and think that this is good yet it’s still a bit lacking.

“Hit Me” is a great party jam with a really addictive hook and we get plenty of energy from both Mino and Bobby, but my biggest complaint is that the two are not distinguishable from one another. In a sense, their personalities are too interchangeable and there’s not enough contrast from one to compliment the other. This is a shame because we know they both have different styles they can bring to the table. Bobby is generally the more high energy one who goes hard and brings a certain bounce to his raps with a very aggressive delivery. Mino is more versatile in that he can pump us up with something upbeat or change up his delivery with a deeper, softer tone. For the sake of contrast, having Mino sound less like Bobby and go with a deeper voice and a softer delivery for this song would have made the duo a bit more distinguishable.

The one thing about GD&TOP is that one would never confuse who is who on the track. Their voices and rap styles are at such opposite ends of one another that it just made absolute perfect sense to pair them together. Their personalities and styling are totally different and they compliment each other very well in so many different ways. In essence, TOP is the foil to GD, and the other way around. By putting them together, their contrast to one another allows us to appreciate each of them that much more.

For example, compare “Hit Me” to GD&TOP’s “High High.” It’s the same type of party style track with a very similar goal of introducing the sub-unit as a pair who can bring down the house. See how the two are so differently styled from their outfits, accessories, hairstyle, and color scheme. See how GD’s movements are so purposefully animated and excited while TOP’s are so deliberately cool and powerful. Each person’s style and expressions work in accordance with their delivery and, through contrast, they work to distinguish themselves from one another. By comparison, Mino and Bobby are too similarly dressed, they sound and act too much alike, and the MV for “Hit Me” doesn’t do enough separate the two as distinct individuals.

“Full House” does a lot better in helping us distinguish Mino and Bobby from one another by giving them more personality to work with than just the ultra hyper party animals we got from “Hit Me.” For one, their outfits are constantly in flux depending on the setting, ranging from ultra sleek black suits with slick hair to ripped jeans and denim jackets. I like that while both members shared a similar style in each scene, there was enough of a contrast in their outfits to allow us to tell them apart.

I also really like that they intentionally contrast their rap styles in “Full House.” After Bobby got the entire first verse to himself, the song dekes us for a second when it seems like Bobby was going to begin the second verse but then Mino jarringly cuts him off, allowing us to appreciate their difference in rap style. The different rap styles also translate into different expressions and thus more distinguishable personalities between the two giving us a much fuller look at the ultimate potential of combining these two rappers.

Since a lot of my complaints for “Hit Me” were addressed in “Full House,” I have to take it up a notch by comparing “Full House” to the masterpiece that was GD&TOP’s “Zutter.” It’s a bit unfair to compare the two but “Zutter” is a primary example of how to inject a ton of personality into a song. Structurally, “Zutter” perfectly separates the parts for each rapper. Aside from each member having their own full verse, the bridge and chorus is evenly divided into parts which equally suit each rapper. Compare that to the autotuned chorus of “Full House” where it’s hard to tell which rapper is even performing it, making it hard to not find it a bit lacking. 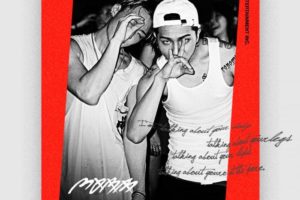 Visually, each rapper in “Zutter” has his own backdrop with sets which are specifically designed to facilitate their story and character. The situations in which GD and TOP are put together in are completely outrageous and wildly comical while each rapper is allowed to improvise and impose their own personality onto the setting. By comparison, Mino and Bobby are in mostly all the sets together and the two don’t do much in them aside from emoting to their raps and bobbing to the music.

I get that it’s really unfair to compare “Full House” to “Zutter,” mostly due to the amount of experience that GD&TOP had accumulated by the time they released “Zutter,” but it’s worth noting that they’ve set the bar so high that, again, it’s just hard not to compare when their sibling act is in such a similar vein.

Overall, “Hit Me” and “Full House” aren’t really that bad on their own, and together they signify a highly impactful debut for MOBB. However, they pale in comparison to their predecessors GD&TOP, and this deficit leaves us wanting more. As I’ve said, we would relish such a creative coupling of Mino and Bobby in an ideal world; but, in a world where GD&TOP have been doing this for far longer and have made incredible hits such as “High High,” “Knockout,” and “Zutter,” it’s hard to not think that MOBB has the potential to be so much more. Here’s to anxiously awaiting their next comeback.

Readers, what are your thoughts on MOBB? Are they better or worse than GD&TOP?