EXO'rdium in Seoul: Hot in Every Way 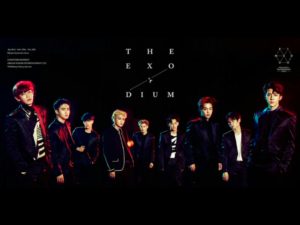 It’s ironic that EXO’rdium is Exo’s third concert series to be launched since their debut in 2012 — hardly a beginning at all, but more of a continuation as Exo conquers the world of K-pop. The first tour, The Lost Planet #1, mainly contained itself to East and Southeast Asia. The second tour, last years EXO’luXion, made it all the way to North America. This July, Exo kicked off EXO’rdium in Seoul, and the sky is seemingly the limit for how far this concert series could reach before its encore concert back in Seoul next year.

There’s no arguing that Exo has grown to be one of the biggest names in the game, and you need look no further than the war zone that is Yes24 ticketing to confirm that fact. I was lucky enough to make it through ticketing, selecting the first seat I could get my cursor on, and quite miraculously ending up with a ticket to one of the hottest concerts of the year.

And I mean hottest in every way possible.
Olympic Park Stadium in Seoul — and its surrounding park — undergo quite the transformation when Exo fans descend on the space. The subway station fills with teenage girls handing out fan stickers, minding their time; the walkway to the stadium is littered with fan site booths and goodies. The merch lines, though long, run with precision and efficiency. There’s even a tech support booth for any wayward light stick woes you may have pre-concert (more on that later). It’s Exo land. Exo planet, Exo park. It’s systematic, and there are unwritten rules that everyone just follows; because that’s Korean fan culture. I’m pretty convinced Exo-L could go off to a desert island and run their own commune remarkably efficiently — so long as there is wifi. It’s organized madness, and more than a little terrifying and awe inspiring.

So, with my overpriced, fancy light stick in hand, and Chanyeol jersey on my back, I made my way into the venue. 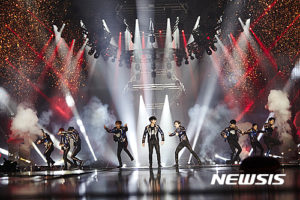 Anticipation mounted as fans begin to file inside the stadium. After what felt like an eternity, the lights dimmed, the fangirls screamed, and the longest VCR known to man began to play on the screen. Setting the theme for the concert, the VCR introduced Exo as heroes of the planet throughout history (yes, with a reference to Suho’s remarkable resemblance to Prince Yi Wu). Meanwhile, the members popped up throughout the stadium in “Mama” era cloaks as they were formally introduced to the audience. It was very dramatic, and intended to set the theme for the rest of the concert.

Personally, though, I found EXO’rdium much less theatrical than its predecessors. EXO’rdium picked up much where EXO’luXion left off, introducing Exo’s more mature, more sexy side; however, this concert abandoned its theme early on, choosing instead to deliver Exo as mature performers without distracting pretenses.

This was no more apparent than in the first three stages (“Mama,” “Monster,” and “Wolf” remix versions). Not even ten minutes into the performances and Baekhyun — an obvious fan favorite in the stadium — ripped off his shirt, revealing that he is nutella abs no more. Both Lay and Chanyeol would later follow Baekhyun’s lead, meanwhile Chen pranced around in a mesh T-shirt for a good portion of the concert.

The first portion of the show can easily be described as the sexy half, where Exo rocked through their more sultry discography including, “Playboy,” “Thunder,” and “Artificial Love.” The sexy image really does suit Exo on stage, even if some members struggled with cane-grinding more than others. Whereas during Exo’luXion, the water only came out for Kai and Sehun‘s “Playboy” dance, EXO’rdium made no attempt to keep the boys dry, with water pouring from the ceiling as the members danced beneath it. 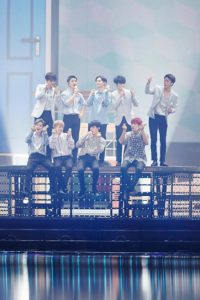 Following the second talking moment came Exo’s set of more laid back, cutesy stages; most notably, the guitar segment where Lay and Chanyeol accompanied the members through acoustic versions of “My Lady,” “Monodrama,” Call me Baby,” and “My Turn to Cry.” The group banter was on point through this portion, and even if they were sitting at the far stage for most of it, it was a joy to watch. I’m sure it also provided a nice rest break for the members who has just powered through multiple difficult dance numbers and needed the idle time.

When Exo came out as overgrown elves, the mood once again changed to one of pure silliness. The members chased each other around while half-performing “Heaven,” “XOXO,” “Girlfriend,” and “365,” and half laughing at one another. Naturally, the audience (including myself) cooed the entire time. The outfits were ridiculous, much like Suho chasing after Chanyeol and D.O. with his pointed shoes and hat. I can appreciate that each Exo concert so far has taken the time to have at least one silly stage, as it keeps the mood up when most members of the audience are beginning to feel winded or hot.

Having already made their way through a huge portion of their discography, I expected the concert was going to wind down soon. However, the members kept going, performing “Overdose” and remixes of both “Light Saber” and “Transformer.” The members inevitably got wet again, prompting another costume change before they came out for the final set of high energy tracks like “Drop That” and “Run.”

A note on “Drop That”: it irked me like no other when SM insisted the group perform the track at the year end awards shows — Exo is not a hype group. But the number does work really well at an Exo concert, when audience members are all screaming “We are E-X-O” and everyone can dance along. 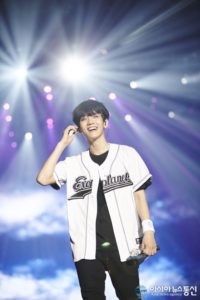 Exo encore stages keep getting longer and longer. Even though the encore track was technically “Unfair” the night I went, the group also performed “Cloud 9,” “Growl,” “Lucky One,” and “Into Your World” before they took their final bows and exited the stage. The tracks were a good note to end on, hitting on new releases, fan classics and sentimental tracks all in one go.

Even though the members seemed so winded they could barely speak by their final moment; they pushed through the entire concert at full force, making their way through an impressive forty tracks (and a run-time of 3.5 hours), before the evening finally came to an end. They definitely proved their stamina, I’ll say that much.

There were a lot of upsides to EXO’rdium, especially compared to it’s predecessor. Exo’s lives, particularly Baekhyun’s, have stabilized quite a bit. There was less of key-singing, and more clear projection of each member’s respective parts. Furthermore, the group and the concert coordinators made much more use of the stadium space provided. Instead of limiting themselves to the two main stages and occasionally branching out towards the audience, the members spent most of EXO’rdium independently moving about the stadium, performing for individual sections and giving each area a chance to see each member up close for at least one number. They also spent a lot of time playing around with each other both verbally and physically, and their natural chemistry was apparent.

It felt much more like Exo was engaging with the audience, rather than simply performing for them. I was especially fond of the “Tender Love” stage where the members (Minseok for my section) encouraged fans to stand, and dance along with their light sticks. I have to echo Madi’s sentiment from the New York concert that Minseok is adorably wiggly and energized. While the dance line put forth a lot of sexy– and wet — special stages, Minseok stole the dancing show simply by being so energetic all over the stadium. That man can wiggle, pop, and body roll like it’s no one’s business, and he seemingly does it so naturally. 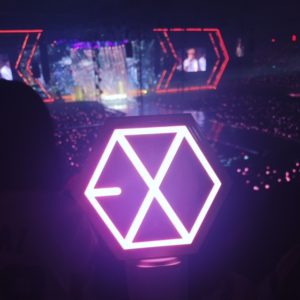 Another positive that I’ll begrudgingly acknowledge was SM’s implementation of new light sticks that work in partnership with the Wyth application. Essentially, the app takes your seat information and controls the colors of your light stick through bluetooth. I really, really didn’t want to be pressured into handing over any more money to SM than I already do; but, alas, I am a sheep and the prospect of having my light stick do cool things in sync with the numbers being performed eventually won me over. It actually turned out to be rather enjoyable, watching all the sections light up in cool patterns, seeing the stadium turn different shades to match the mood of the track being performed.

There was one major downside to the concert, and that was that Jongin was unable to participate for most of it. The poor man keeps getting injured, and it’s a shame because you could see how much he wanted to participate, but he was only allowed on stage for special numbers. The members did their best to keep the mood light in his presence, but it was obvious that he was down about the whole ordeal. Furthermore, EXO’rdium cut back on the individual member stages and unit performances. Baekhyun had his moment in a dance solo, and Chanyeol got to (fake) play electric guitar, but there weren’t exactly a ton of opportunities for each member to shine on their own. This was especially true for both D.O. and Chen, who are both very competent main vocalists, but seemed to get very little time in the spotlight.

With the addition of all the wet stages, there was also a lot of downtime as the stage was cleaned and dried and the members changed outfits. Not all of these lulls came with VCRs either, so it was pretty easy to be reminded of exactly how hot the stadium was, and how long the concert had been running. When in the presence of Exo, one shouldn’t be concerned about time, but with the stadium as uncomfortably warm as it was, I could barely wait to dart out of my seat and into the fresh evening air when the concert finally came to an end. 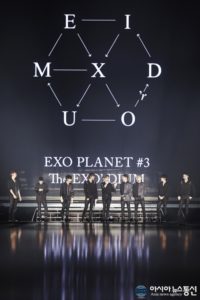 Temperature aside, I’d mark EXO’rdrium as a decent enough growth for the group’s third concert series; they’ve definitely matured a lot, and don’t seem afraid to try new styles and choreography to keep the show interesting. The group has also shown their willingness to let the members be more dynamic: Lay having an almost solo stage with “Monodrama” and Baekhyun receiving his own dance solo. With more time, the members will only become more well rounded, and I’m excited to see what kind of stages their multiple talents can produce in the future. Knowing that Seoul is only the starting point of this tour, I’m also anxious to see how the show will evolve over the next several months.

Above all else, though, I’d say the best part about EXO’rdrium was the mood. As someone who fangirls more in her private life than in the outside world, EXO’rdium felt like a safe space where I could swoon as much as I wanted without any judgment. Yes, I made an inhuman noise when Chanyeol showed his abs, and I may have squealed when Baekhyun in a wig happened on the screen; but that’s okay because I wasn’t alone. Everyone was just as pumped (if not more pumped) than I was simply to be there.

On a final note, anyone else as on board for the BaekChenXu sub-unit as I am?