Web original content has been going through a serious explosion in the last couple of years. Many of these series have been focused on the domestic market, such as EXO Next Door, promoting idols and up-and-coming actors. The one exception comes from the partnership of international streaming behemoth Viki and producer Sebastian Lee (City Hunter, The Good Wife), who have teamed up to create a cross-cultural series, Dramaworld. 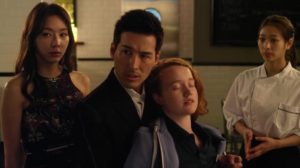 Dramaworld  tells the story of lonely college student Claire (Liv Hewson). She’s obsessed with K-dramas, especially Joon Park (Sean Dulake), to the extent that she starts rambling about how Joon Park and Seoyeon (Bae Noo-ri) need to kiss because it’s been 12 episodes already to a customer at her job. So when Claire falls into her favorite drama, Taste Of Love, with the job of making a happy ending, she’s over the moon. Yet fellow facilitator Seth (Justin Chon) warns her something about Dramaworld is very wrong, and if they can’t fix it, Dramaworld will be destroyed. There is meta, there is very meta, and there is Dramaworld. The plot is not driven by fateful coincidences and people falling in love, but making the coincidences and manufacturing love. Seth and Claire openly discuss the tropes of dramas, everything from the need for happy endings to the law of dramas declaring that all male leads must have a sexy hot shower scene. What is usually left as meta-text — the first lead/second lead dynamic, the importance of first meetings, men catching fainting women — is the explicit text of Dramaworld. This makes for an unusual series, one whose comprehension depends on being familiar with the tropes Claire and Seth are trying to invoke.

More than anything, Dramaworld is a love letter to Korean dramas and the fans that watch them. The best jokes, such as Joon playing the same character in every drama, Claire’s product placement makeover, and the flashback effect, are derived from in-jokes from the drama community. Claire’s frustrated reactions to the insanity around her are exactly what every drama fan has yelled at their phone when someone’s being an idiot. It’s just that unlike us, when Claire screams, they can actually hear her. Dramaworld is a series that takes our snarky fangirl jokes and weaves them into a world where they are as real and omnipresent as gravity.

That love letter extends beyond the comedy of Dramaworld. Every drama fan will, at some level, look at Claire’s admittedly concerning obsession with dramas and see a bit of themselves in her. From her rambling about dramas to anyone and everyone to her falling in love with Joon to her rejection of reality for dramas, Claire is both the best and worst of drama fans. Even when she learns that she has to live in the real world, Claire doesn’t give up on dramas, but her love of dramas becomes much healthier that it had been. 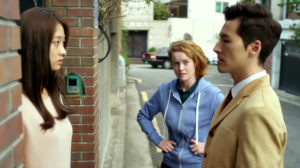 By far, the most subtle yet potent element of Dramaworld is the writing. While the humor is both in your face and extremely effective — Dramaworld made me laugh so hard I had fits — the character writing and plot is handled with a surprising deftness. The villain is made clear early on, but his motivation remains hidden until the end. Joon’s handling of his status as fictional is both unexpected and in character, and the foreshadowing is absolutely brilliant, especially the usage of audio motifs.

That said, Dramaworld has flaws. Many, many flaws. The development of Joon and Claire’s relationship is rather uneven, loaded into the first and last couple of episodes. The saeguk world adds nothing to the story and raises a lot of questions.  And of course, the endless questions about Dramaworld itself: if everyone’s minds reset after the first kiss, what happens in dramas where that happens before the last episode? How do writers, actors, and production fit into Dramaworld? And what has the audience of Taste of Love been watching while Claire’s been in Dramaworld? Yet, these flaws are overridden by the slapstick, self-referential, smart-aleck fun of Dramaworld.

Dramaworld is, simply put, amazing. Certainly not flawless, rarely logical, but enthralling and addicting to any K-drama fan. Maybe even some non-fans, if you’re willing to explain the tropes. What it is, though, is a hilarious ride for anyone waiting for a Korean billionaire to walk through their door. Dramaworld can be streamed on Viki and Netflix.