Hey, remember how long ago, when the skies and grounds were one the legends, through their twelve forces, -nurtured the tree of life … before turning into fist-throwing wolf boys, who later went on to become an American football team?

SM may have strayed some way from their superpower path over the last couple of years; but with 2016’s “Lucky One,” Exo has returned to the powers their agency spent god knows how much money and time creating, and placed them into a dystopian setting in what appears to be the group’s most focused — and ambitious — comeback to date.

While the one shot technique continues to persist in SM MVs, at least it is used differently here. Where the camera would usually follow idols as they danced, here we sway back and forth between guerneys holding Exo members. For those experiencing vertigo, I recommend the Mandarin MV.

The first thing I noticed, though, is the make-up, which is better than expected; while a couple of members look as though they’ve had their BB cream applied with a trowel, the plain look complements the institutional environment. Save for a few pink lips, dark blue eyes and yellow undertones (which actually add dimension to the visuals), the members look like they’ve had the life leached from their faces. The members match their lifeless look with blank expressions as they sing — the only emotion we see is glimpses of members strapped down and thrashing about, caught while the camera moves. 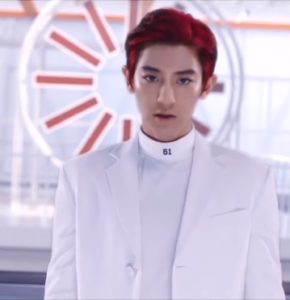 Also worthy of mention are the slick hair-dos, which are so on point in this MV. This is literally the best Chanyeol‘s hair will ever look this era, perfectly coiffed and matching the red accents within the facility. It should also be noted that the nurses’ tights are white as they wheel D.O in at the top of the MV; once inside, though, the tights change to red in colour. Along with the red markings on all the surfaces, and the nurses’ red face guards, the colour hints at danger.

The nurses hook the members up to IV drips, to which a mysterious black liquid is added. This appears to trigger a reaction of some kind: we first see an unconcious Baekhyun awaken after he is given a dose of black. And as Lay opens the second verse, we enter a black void and Exo’s inner workings: heavenly bodies, members using their powers, dice, and a dancing Kai zoom toward and past us.

Thus far, the narrative has been pretty clear: Exo are the human subjects of some kind of experiment, forced to undergo different tests and treatments. But what exactly for, isn’t made clear; and this is where the fan theories come in.

A popular one is that this MV serves as an origin story for how Exo got their superpowers. Rather than being the mythical arboriculturalists they were introduced as in the “Mama” MV, the reality would be that the members were injected with some kind of chemical X. And within the void, their emerging powers become entwined with outer space to give us the mythology we were introduced to in “Mama.” 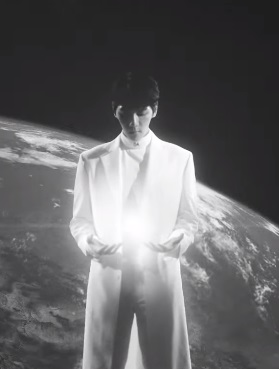 But as Exo were apparently held and experiemented on against their will, their mind brains are unwilling to acknowledge the real source of their powers, instead choosing to construct a different origin story as a coping mechanism. Or, they were brainwashed by their captors into believing this myth, perhaps as a way for the experimentors to cover their tracks.

Kris, Lu Han, and Tao can even be retconned into being members of a similar program, which the current nine members briefly interacted with. The drama MVs for “Wolf” and “Growl” could be used to support this theory for Kris and Lu Han. The pieces don’t all fall together perfectly, but it’s a good enough fit to work.

However, this is not the theory I had when I first watched the MV. Rather than an origin story, I prefer to view “Lucky One” as a continuation of the story that started with “Mama.” In my theory, the previous MVs exist as they do; but the teasers for “Call Me Baby” and the MV for “Love Me Right” hint at a frustration and paranoia resulting from three of their original twelve no longer being present.

We all know why the aforementioned three left, but in-universe the reason for their disappearance is unknown. All the members know is that they are going missing, one by one, and there’s no way to know why, or if anyone else will disappear, too. Who’s next? Only YG knows. Eventually, the rest of the group is also captured, and experiemented on. It is during this testing that the members, with their fears already realised, turn inward and remember their purpose, which gives them the motivation to break free.

It has been a while since we’ve seen Exo use their powers, and it could have been because of their fears of disappearing. But now that they no longer have to worry about that, their abilities come out in full force. D.O initiates the escape by earthbending the glass out of the windows; and when Sehun and Chen are confronted by a nurse, Sehun unconciously knocks her down with a gust of wind, and a stunned Chen unwittingly knocks her out with a bolt of lightning.

This apparent lack of control could be explained by the members’ survival instincts kicking in automatically; if you are going with the retconned origin theory, it can be seen as the members discovering their powers for the first time. 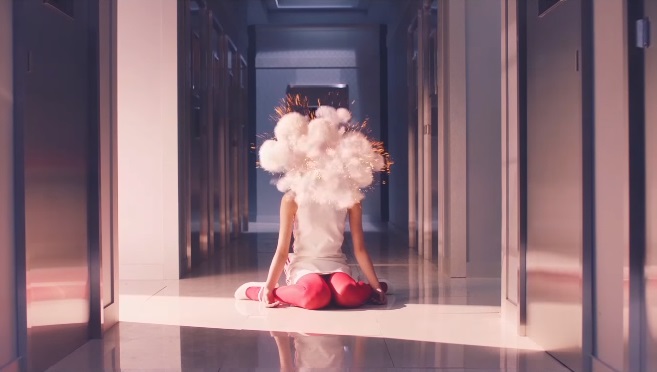 The best part of this scene, though, is when the nurse’s head explodes. Up to this point, the tone has been dark and serious; but when that head blows up, it takes you out of the moment a bit because you definitely did not expect that to happen. The unexpectedness lightens the mood, and now the chirpy synths in that upbeat, funky R&B chorus start making sense.

The tonal shift also marks the introduction of some farce into the MV, and I mean this in the best way. The MV starts to feel less like a dystopian thriller and more like a spy spoof, like Get Smart or Archer. Some may be unintentionally hilarious, like Xiumin and Suho taking a break from escaping to drink glasses of water; it seems like a strange thing to do mid-breakout, but it’s perfect fodder for more quips about responsible water-conjuring leader Suho. And it only gets better when you notice that Xiumin has added ice cubes to their glasses.

There is also the part where a surrounded Kai begins to dance towards one of the nurses. The MV shows that there is a precedent for this: after Baekhyun and Chanyeol become trapped in a room full of nurses, they sing and rap their way out. Kai’s dancing, like Chanyeol’s rapping and Baekhyun’s singing, is meant to destroy the nurses (and fans). That said, the dancing is an unexpected reaction to being cornered, and achieves its comedic effect through that fact; but also leads to a more serious and heroic moment of triumph over evil.

On a side note, don’t get to see Kai use his power of teleportation, but you could also say that his dancing transports the viewer. Maybe dancing is how Kai teleports, and we’re just seeing the process in slow motion.

Whether the dancing moment was intended to be comedic could be up for debate (I would argue it is intentional); but there are moments when the comedy of a moment is undeniably planned. For example, Lay’s power is healing, which has been represented in the past by him bringing a wilted flower back to full bloom. So how does it fit in this MV? Maybe, like Suho keeping Xiumin hydrated, he heals an injured friend? Or maybe he gets injured himself, but miraculously self-heals? 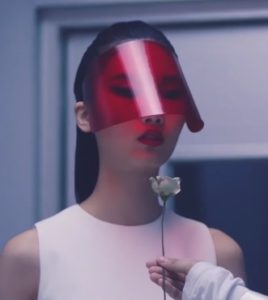 Nooooope. Instead, we get another flower and a charming Casanova-level smirk from Lay, directed at a nurse whose head promptly explodes. Talk about killing ’em with kindness! This sequence feels deliberate in its comedy, and Lay’s delivery seals the deal. Just imagine what he could do with a voicemail greeting.

There is another tonal shift at the very end of the MV, where we get a bird’s eye view of the facility… which is set up like a maze. The thrill of realisation and recognition (Exo has used the maze motif before) is a great feeling with which to leave viewers.

This is definitely the first time I have been impressed with a plot-driven MV from Exo. “Love Me Right” played it a bit too loose for my liking, and do any of you even rewatch “Wolf” or “Growl” because you seriously enjoyed the plot and how it was executed? Because I certainly don’t. I’m not even counting “Mama” because that is nothing more than a dance MV with a load of exposition.

With such a fascinating back story and so much potential, SM didn’t seem to know what to do with Exo for a while. But they went back to the drawing board with a renewed focus and vigour; and while I’m not the biggest fan of retconning, I cannot deny that the agency has —FINALLY — successfully managed to use the mythology they created to tell an intriguing tale that was worthwhile.

Now all they have to do is not screw it up with subsequent MVs; and if “Monster” is anything to go by, I think that is something SM can do.

Incidentally, “Monster” will also be reviewed on Seoulbeats, so please watch out for that. But coming back to “Lucky One,” the successful execution of its plot, the meaningful reincorporation of Exo’s powers, the styling, and those comedic beats that perfectly matched the mood of the music is why I’m awarding it…

How did you find the “Lucky One” MV? Do you have a theory that is different to the ones detailed above? Let us know in the comments below!