On Air, Don’t Care: Pushing the Boundaries of V App and Live Broadcasts 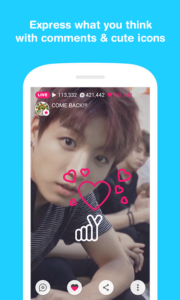 Ever since Naver launched the V App last year, K-pop fans both in South Korea and all around the world were ecstatic to know that the opportunity to get closer and more intimate with their favorite idols would be more possible than ever before. This application, which can be downloaded and installed via any iOS or Android smartphone, has given fans the chance to directly witness the live broadcasts of idols as well as drop their own comments while the live broadcast is in session, thereby being able to communicate with idols on the spot despite being miles and oceans away from where the idols are.

While the V App has had its fair amount of technical inconsistencies, it is nevertheless a significant entity which the more global and technological age of K-pop has utilized. From regular updates which idols can conduct themselves by doing impromptu live broadcasts to actual mini-segments of the variety show-kind that the idols have created themselves just to entertain fans, it has definitely revolutionized the way fans interact and connect with idols.

Recently, V App has gotten itself into a bit of a hot water after a rather messy live broadcast of a short variety show entitled Flower Crew. The show, which was made to mimic KBS’ popular reality TV series 2 Days and 1 Night, would be utilizing the application’s fan interactivity feature by relying on fan votes and comments for the different tasks and challenges which the celebrities on the broadcast would be doing. The Flower Crew variety show stars some veteran MCs of the industry (former professional soccer player Ahn Jung-hwan, former professional basketball player Seo Jang-hoon, comedian Jo Se-ho, and Yoo Byung-jae)  as well as two young rookie celebs–actor Kim Min-seok who appeared in Descendants of the Sun, and BTS’ maknae Jungkook. 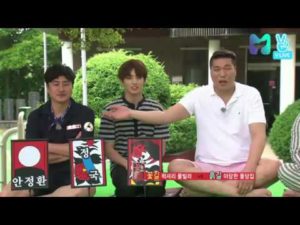 During the first day of broadcast, fans voiced their concern regarding the way the MCs were treating Jungkook and Min-seok. From refusing to accept the food that Jungkook bought and their condescending remarks towards Jungkook’s popularity, to their allegedly rude way of talking to Min-seok, it wasn’t long before fans were making their discomfort known and soon, the older cast members issued apologies addressed to Jungkook’s and Min-seok’s fans, acknowledging that what happened during the live broadcast might have been inappropriate to a certain extent.

Some might say that the overall incident was just an unfortunate and awkward misunderstanding. As the MCs have relayed in their apologies, they were trying to be close, however some fans (particularly South Korean fans) are definitely not buying it considering how Korean etiquette and manners between strangers is different between close friends and acquaintances. In addition, fans were also quick to pick up on Jungkook’s and Min-seok’s nervous demeanor. Jungkook in particular appeared way too uncomfortable during the MCs’ moments of casual jesting (mostly deriding Jungkook’s fame) and considering how this was Jungkook’s first time on a variety show alone without his fellow BTS members, it was easy for anyone to feel bad for the maknae.

Misunderstanding or not, it was clear that right off the bat, this incident is just an example of why V App’s fan interactivity feature is not always that pleasant. Since Flower Crew heavily depends on fan requests and votes for the execution of certain missions on the show, it was almost way too obvious that Jungkook would almost always be the most favored one considering how BTS (along with EXO and Big Bang) has one of the largest followings on V App. In the end, what could have been a supposedly funny and highly entertaining show (since it was meant to be like 2 Days and 1 Night), ended up becoming a hot mess. 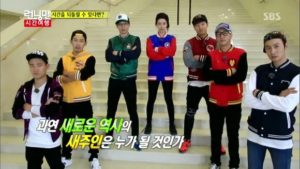 Apart from the comments, the live broadcast format was definitely not the way to go for this variety show. Since the V App’s appeal is that it makes everything look authentic by getting rid of cuts and fancy edits that one would normally witness in TV network shows, it is clear that this sort of format is something that would not work on a variety show.

Variety shows are variety shows for a reason. Despite how they try to appear ‘authentic’, a part of it will always be scripted and altered via that signature K-variety style of editing which more often than not can either positively or negatively manipulate the way viewers can perceive a certain incident or cast member involved on the show.

V App as a supposedly genuine and intimate medium for fans and idols should remain just as that. Sure Naver occasionally releases variety-like content on V App (case in point: BTS’ Bangtan Gayo and Run! BTS), but they are still edited and formatted in a way that it appears just like your usual variety program — deceptively full of consistent fun and laughs and devoid of any awkward moments or uncomfortable scenes which some viewers might easily misinterpret.

Due to how the K-Entertainment world relies heavily on the relatively controlled environment and masterful editing of their shows in order to get the most desired reaction from fans and viewers, it is easy for the cast and crew members to overlook the consequences that might emerge during an actual live broadcast. Guests and MCs might get too comfortable and forget that this scene or that scene cannot be edited out once it has been executed and so on.

However, on a more hopeful note, perhaps this recent live broadcast mishap could encourage TV personalities to be a lot more professional and careful regardless of whether or not editing will be involved in the show. After all, this kind of incident has probably happened dozens of times — probably also at the expense of budding rookie idols and celebs — behind the scenes of various other variety programs and were simply hidden away from the eyes of the general public after some careful editing.

In the end, despite the promising premise of the show, the cast (particularly the MCs) seemed way too used to the usual goings-on of a TV network broadcast where you could simply pull off anything and  depend on the editing skills of the PDs to make it work in everyone’s general favor. Add to that the fact that Jungkook and Min-seok are more or less variety show neophytes and you’ve got yourself a train-wreck of a show.

What are your thoughts on this issue? Did you think that the show could have worked regardless of its live broadcast format?