Bright Absurdism Reigns in Jonghyun's "She Is" 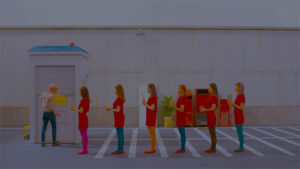 After regaling us with the lush and sensual BASE last year, SHINee‘s Jonghyun is back with his first full-length album, She Is. Both albums explore sexuality, but She Is is funkier and more playful, while still retaining Jonghyun’s distinct groovy alternative R&B style.

The MV for the title track, “She Is”, is fittingly coloured with bright hues. It has a saturated quality that is typical of many K-pop MVs released close to or in the summer (see, for instance, GFriend‘s “Me Gustas Tu” and Yoo Seung-woo‘s “You’re Beautiful”). Here, however, the saturation is ramped up and paired with a dimmed contrast to achieve a bizarre, alienating effect.

As far as MV types go, “She Is” lands squarely in the category of MVs that are not related to the song’s content. Like “Married to the Music”, “She Is” has a “what the heck did I just watch” effect on the viewer, although it’s not quite as gloriously bizarre. It’s tamer, quirkier, but more confusing, resisting any (mainly my) search for meaning. What is clear though, is that there are two main events occurring: Jonghyun goes to work at a construction site, and some of the cubicles around the site are being chomped down by an excavator that looks incredibly like a dinosaur.

Beyond these events, nothing much makes sense. Jonghyun is working at a construction site, but his work is similar to a tailor’s. He tries and fails to put some thread through the eye of a needle. And he doesn’t even fix clothes: he threads some string right through a tube of lipstick. The customers in queue are inexplicably clad in the same red dress, holding an assortment of items. Stranger still, when Jonghyun leaves his cubicle, the queue is still made of the exact same people, even though he had processed a few requests (including chopping a candle in half and wrapping it hideously).

The carnival of confusion continues after Jonghyun ends his first shift. He marches towards a different office on the same site, where his doppelgänger is dismantling the door for unknown reasons. He (or his doppelgänger, one of them have disappeared) emerges in a green blazer to look through a matching pair of green binoculars, but we don’t find out what he’s looking at. He marches off in an orderly fashion with the door in tow. 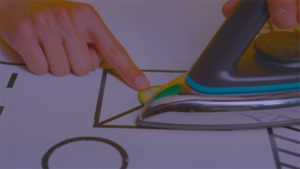 And then it’s time for lunch. Jonghyun sits with a burger (or, as a friend of mine puts it, a Krabby Patty) in front of him. It’s not clear whether the burger is meant for him or for the other workers, because he never eats it, and the workers line up outside his window as though in queue for takeaway. Someone in a yellow raincoat, who may or may not be Jonghyun, fastens a strap meant to hold a camera or a pair of binoculars, but attaches an iron to it instead. He proceeds to iron the sauce and a slice of cucumber from the burger. I don’t understand anything, but this is my favourite sequence.

Not much light is shed on the personality of Jonghyun’s character, except that he seems to be very particular about neatness. He aligns his scissors with a chart on the table, follows the paths exactly in straight lines, and straightens his blazer before his meal. But this deduction is contradicted by other details: he tosses half of the candle onto the floor behind him, wraps and tapes the candle haphazardly, and squirts ketchup on his raincoat (assuming the person in the yellow raincoat is him).

Put together, these odd details hardly match up, nor do they add up to anything significant. The MV’s experimental nature is likely intentional, and is perhaps best dealt with by treating the MV as absurdist. In philosophy and the arts, absurdism is the belief that the search for meaning is futile because meaning does not exist. Deeper meaning does not appear to exist in the MV, so an attempt to make sense of it will not be fruitful. 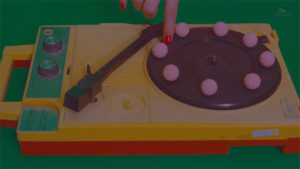 I’m not against a work that appears to have no meaning, but for this lack of meaning to have meaning, it should be motivated by a purpose. Shifting away from K-pop for a bit to cite an example: in Samuel Beckett‘s play, Waiting for Godot, the two characters wait around for a person who never appears, and nothing much happens. But the lack of narrative progress was indicative of the loss of meaning and purpose in modern life. A larger scheme of things is ultimately missing from “She Is”: it has no inherent meaning, but it’s not self-reflexive in suggesting why it has no meaning, nor is it poking fun at the intellectual impulse to find meaning in everything.

However, this is not to say that the MV doesn’t have a function at all. It might have nothing to do with the lyrics, but its aesthetics bring out the aural qualities of the song. The neons, bright pastels, and quirky images are visual expressions of the bright synths and smooth, exquisite falsettos. Some movements match details in the music too: a girl tugs the corner of her eye upwards as Jonghyun sings “small eyes”, and Jonghyun drops a pink gumball into his pocket in time with a “bloop” in the instrumental. 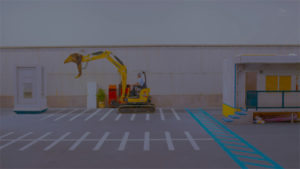 The MV has enough points of interest to keep me watching till the end, but it was a very disorienting experience. There were some fascinating visual details, but the shots are short and the cuts are often so quick that the viewer doesn’t get the chance to process them. Because there isn’t much beyond the initial intrigue, the MV is not something I foresee myself returning to again.

Readers, what did you think of this MV? Did you enjoy it despite its bizarreness?

(SMTown via YouTube, Images via SM Entertainment, Lyrics via pop!gasa, Daniel Miessler: “The Difference Between Existentialism, Nihilism, and Absurdism”)