NCT U Nail the Aesthetics in "Without You" 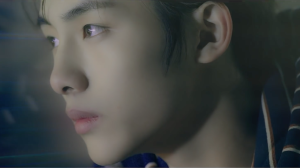 SM Entertainment never fails to intrigue while simultaneously making fans scratch their heads. This sentiment pretty much sums up NCT U‘s debut this past week. Though SM’s plans to glocalize were announced months ago, the debut of NCT U with “The Seventh Sense” and “Without You” still felt like it came out of left field. Perhaps this is because no one really understands what NCT U is in the first place.

Maybe we were spoiled (or overwhelmed) with the lead-up to Exo‘s debut, but NCT U’s debut felt rather. . . confusing and anonymous. Following Red Velvet, NCT is the second SM Group to be introduced through the SM Rookies system. SM Rookies created an informal platform through which SM could warm-up their trainees without formally debuting them in a group: get their names out in public so that they could debut with a ready-made legion of fans. But, for more casual SM fans, unless one was actually keeping up with the Mickey Mouse Club or SM’s YouTube channel, the introduction to the members as artists fell a little short. Well, aside from Taeyong‘s questionable rap-feature in “Be Natural.”

With this in mind, NCT’s debut MVs are really our first introduction to them as a team and not just as individual SM Rookies. The debut came in two units, performing two remarkably different tracks: “The Seventh Sense,” a Drake-style R&B jam, and “Without You,” a sentimental electronic number. If “The Seventh Sense” was meant to showcase the rap line of NCT, “Without You” serves as our introduction to three of the vocalists. “Without You” in particular exceeds aesthetic expectations for a rookie debut, but falls a little short of distinguishing this NCT line-up as a vocal, or even musical, unit.

Since NCT is functioning as a Unit group from the get go, “Without You” is performed by only three members: Doyoung, Jaehyun and Taeil. (Win Win also makes an appearance in the MV.) “Without You” tells the story of loneliness, and the confrontation of dreams and reality when it comes to love. It’s remarkably mature lyrically, which I’m not used to see coming from SM. 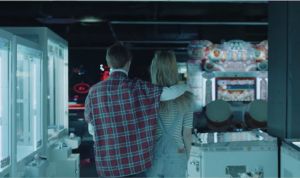 That is exhausted with loneliness

They wanted it so bad

But they couldn’t find it

Look at the hidden scars

Of the ones who were pushed away

Not only is “Without You” a lyrical surprise from SM Entertainment, but the musicality of the track also signifies an attempt in new direction. “Without You” has a pop-band feel, without the band backing it. The track would actually fit quite perfectly onto Day6‘s recent mini, Daydreaming. There’s hypnotic guitars, a steady base line and just the right amount of drums in the chorus. However, since this sound is a little new for SM Entertainment, it’s clear that they’re still working out how to balance the heavier instrumental sounds with a vocal element. All three members sing well, but there’s nothing particularly distinctive about their vocals, and the same can be said for the backing track. 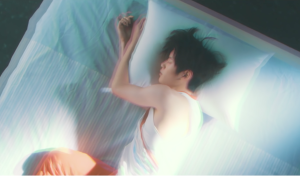 I wouldn’t go so far as to call “Without You” musically uninspired, but no matter how many times I listen to the track I can’t figure out what it’s trying to accomplish. It doesn’t particularly showcase the vocal talents of the three members, nor does it pique my interest about the new group’s sound. I guess, in the end, it’s all a bit too generic sounding. Luckily, the MV has the aesthetics to maintain my interest.

For the MV, SM really spared no expenses when it came to producing a clear visual concept. Unlike Exo’s “Love Me Right,” “Without You” is an aesthetic explosion done in all the right ways. There’s clear continuity between the mood of the track, the color and lighting schemes, and the narrative concept. It’s trendy for sure, but also dreamy and engrossing. Much like a dream, the scenes are strung together mysteriously, with intentional bits of the story missing. Who is this girl? Do they all love her? There aren’t any clear answers, but the aesthetics of “Without You” are more than pleasant enough to tempt a second, or even third viewing to try and piece it all together. 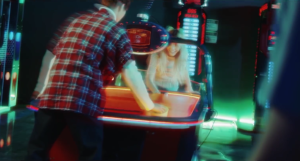 The aesthetics move with the pace of the song, in a somewhat day-dreamy, repetitive cycle. They don’t necessarily build to anything, but neither does the track. While the track could benefit from a little momentum in a specific direction, it’s nice to at least see the two aspects of the release reflect each other.

More than anything, SM deserves a little round of applause for letting NCT out of the box so early on, as well as giving them more emotionally and aesthetically mature concepts from the start.

Even with a spectacle of a press conference and multiple teaser videos, I still only have a jumbled idea of what SM is trying to accomplish with NCT. But, SM Entertainment, much like Apple, has a way of introducing me to things I need before I even knew I needed them. Or, more logically, they create their own markets and then cater to them. Was NCT’s debut totally amazing and memorable? No. Will they probably still do relatively well in the industry like all their seniors have? Yes (they have the power of SM behind them, after all).

It’s a strong enough debut to pull in some fans, but I’m wary of the future course for NCT. I understand that SM Entertainment has had their fair share of recent struggles with members leaving the company. In that respect, marketing a group as a fluid and dynamic unit may work to their favor. But at the same time, how does SM plan to establish a solid fan base without some illusion of a group mindset? Will they be able to carve out a distinctive niche for NCT U, or are they meant to be fluid musically as well? How do they plan to make me as a consumer like a group if the group lacks an identity?

Readers, how are you liking NCT U’s debut? Which of the two singles do you prefer?