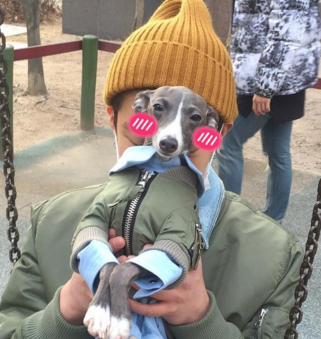 There’s been an increasing popularity in having dogs as pets in Korea since the 1990s when Korea’s economy began to boom. Nowadays, dogs are everywhere. As seen on 4minute Hyuna’s Free Month, dog clothes are sold in street markets and there is even Bau House dog café in Hongdae. Celebrities are deeply passionate about their dogs with Winner’s Seunghoon making an Instagram just for his dog and GD bringing Gaho onto the red carpet. Even variety shows are pet-centric with Petorialist, about activities you can do with your pets, and My Pet Clinic, which focuses on questions about viewers’ pets.

The public is also deeply invested in dogs with a great example being Three Meals a Day‘s Minki, a mutt from the countryside, who stole the hearts of viewers with her silly antics and her growth from puppy to mother. In fact one of the show’s highest rated episodes with 15.9% viewership is one where Minki gives birth to Eddie and Sapphire. 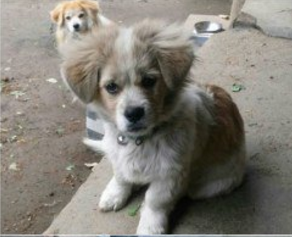 After Three Meals a Day ended, a netizen that was a fan of the show revealed that Minki was sold for $86 and her puppy Sapphire, still owned by the grandmother, was not treated well. While Eddie, Minki’s other puppy, was adopted by 2PM’s Taecyeon, Sapphire has ticks and is listless compared to the other dogs. The concept of proper dog rearing is not a ubiquitous one.

While raising dogs is becoming more popular in South Korea, there are still preferred breeds: pomeranians, chihuahuas, poodles, and other pure breed small dogs. Celebrities, like much of the younger generation are very passionate about animal rights. One notable example is HAZZYS, an accessory brand, that donated some of its proceeds to animal abuse prevention while using Korean celebrities like Sistar’s Hyorin, Kim So-hyun, and 2AM’s Jo Kwon as effective marketing tools.

However, the most notable animal rights celebrity activist would be Lee Hyori who wrote two charity songs, held bazaars, and created a photo book that expressed her belief on animal rights, animal farming, and stories of her own adopted dogs, Soon Shim and Mocha. However, while all of these celebrities’ hearts are in the right place, the larger problem is not animal abandonment, but the dog meat industry in South Korea. 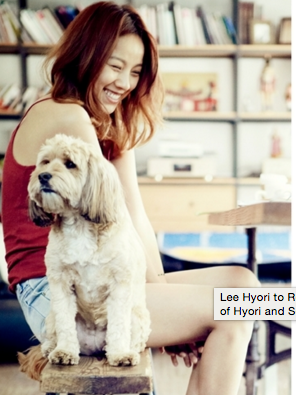 Dog meat is featured in dishes mostly popularly eaten during the summer because it has cooling effects. Historically, dog meat has been eaten since the Three Kingdoms from 57 BC to AD 676, fell with the rise of Buddhism, but then rose with the rise of Confucianism. Confucianists justified the eating of dog meat, by pointing to Book of Rites, which describes dogs as watchdogs, hunting dogs, and food.

Please note that the following paragraphs may contain instances of animal abuse.

In 1991, Korea passed its Animal Rights Protection Law, where Act 6 states “No one should kill animals in a way which is cruel or which provokes disgust without proper, rational reason.” However, despite the legal issues, there still has been a demand for dog meat in soup or in health tonic form. In a strange twist of irony because dogs aren’t considered livestock — since the ’70s they have not been classified as such — there is no regulation on how they should be killed. While dog farmers say they simply electrocute dogs, there are countless cases of blow torching the fur off, and beating the dog to death because of a rumor of how adrenaline causes the meat to be more delicious — or excuses people use to justify higher profits. In fact the opposite is true, animals that have been stressed before their death, produce meat with less flavor and higher rates of spoilage.

Many animal activists outside Korea have commented on the cruelty of the practice of eating dogs to which some Koreans justify as a cultural practice. While the younger generation like celebrities are not interested in eating dogs, they are not interested in forbidding others from eating dogs, which poses problems when passing legislation. There was a 2004 MORI study where 55% were against dog eating but only 24% agreed to ban dog eating. There is also a train of thought that by passing such legislation, Koreans are subjecting themselves to Westernization. 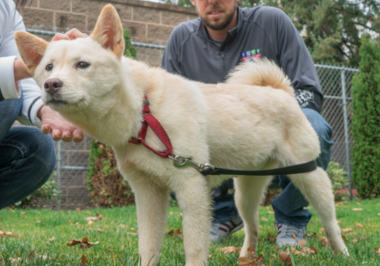 Another argument explaining the difference in views about eating dog is the separation between a pet dog and nureongi, a dog bred specifically for its meat. However, this point is invalid as stray dogs and old pets are also slaughtered as part of the dog industry. An interesting side note is that mixed Jindos, the Korean national dogs, are also included in the breeds of dogs consumed. While the Jindo is protected by the Cultural Properties Protection Act, it only applies if the Jindo is pure breed and born on the Jindo Island — yet another example of differentiating between dogs.

Given the difficulties of passing and enforcing a law protecting dogs, Korean activists have been trying to convert dog farmers into crop farmers. Western activists have also participated in saving Korean dogs, giving them a chance to be adopted into a loving family. It seems that the big reason for pet culture and the dog meat industry to coexist is because pet culture grew too rapidly without getting rid of vestigial notions of dog meat as food.

Perhaps it’s because of collectivism that Koreans can personally not want to eat dog meat, but also not want to prevent others from having that right. Regardless of whatever the real reason is, be it psychological or deeply cultural, in order for all dogs to become more humanely treated there needs to be a change in mentality — all dogs must be viewed as the same whether they are mixed or purebred, small, or large. Hopefully, the younger generation, many of whom are clearly pet lovers, can take this enthusiasm and champion not only abandoned dogs but dogs that are being brutalized for their flesh.