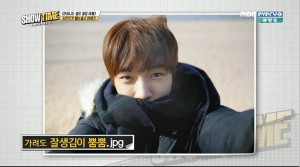 As we near the home stretch of Infinite Showtime, we may start to feel the fatigue setting in. Unless you’re a fan, or easily entertained, it’s a very real concern with just about every variety show. Not every group can overcome it, and not every show concept will keep entertaining relentlessly without the group keeping the pace.

Luckily, Infinite are not novices and know how to entertain. However — and this may be a personal preference — they are best when kept together. The least entertaining, bordering on boring, episodes were those where the group was split apart. The best are always when Infinite are together.

In episode 8, we once again get the boys in separate locations. Seriously, who thought it was a good idea for Myungsoo to go off alone? That was the very first thought that crossed my mind when I realized that he wasn’t waiting for the other members, but rather, filming all by himself. 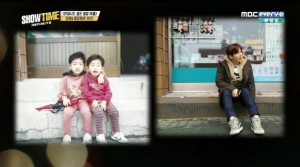 While some members can handle filming alone, either due to experience (Sunggyu), or just innate personality and charisma (Dongwoo, Sungyeol), there are just some who are best when with another member. But it could also be that other members got better concepts for their personal healing trips, or day of relaxation.

The idea is quite nice — if you spend days with the same people, I imagine you’d also want to spend a day by yourself. But at the same time, this is the stuff that is better off not filmed. If there’s a camera and managers and crew, then how could a person actually do some quality relaxation when they also have to stay in idol-mode and remember to entertain the viewers?

That being said, the episode was still a good watch, if only to get better insight on the boys individually. Needless to say, I found episode 9 and 10 much better experiences. Parts of episode 9 is on Woohyun and Sungyeol’s solo outings, which were the most amusing for different reasons. Sungyeol’s is my favorite just because I love dogs and he lived the dream while he was in the dog cafe. That, and it reminds me of Infinite’s Birth of a Family. And while Hoya had a successful trip down memory lane, Woohyun didn’t with his old house gone, his favorite restaurant closed, kids not knowing who he is, and his elementary school having undergone a complete renovation. 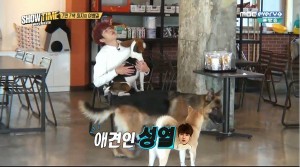 Episode 9 then follows them to New York, where they had a concert. It’s always fascinating to see idols horsing around in their hotel rooms and pulling harmless jokes on each other. In this case, it is Woohyun going into rooms and having a look around. We see who’s on the messy side (Dongwoo, to nobody’s surprise), who’s tidy (Sunggyu, surprisingly, and Myungsoo, not so surprisingly), and who takes good care of their skin. That would be Sungjong, and should surprise no-one.

If episode 8 focused on how Infinite would spend their personal healing trip, episode 10 asks how Infinite would spend their free time together. Of course, the first thing on the list is to eat. By this point, it should be no surprise to anyone that an idol will take any opportunity given to them to eat. Because it is a variety show, there are, of course, little twists. For this episode, the seven members have to divide their time and articulate what they will be doing at any period of time. And for purely variety reasons, games are once again involved. 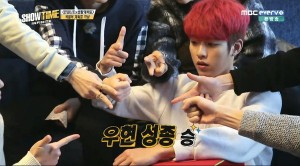 And because games were mentioned, of course the tried and tested, Infinite approved game of Rock, Paper, Scissors is once again played.

The episode also reinforces the known power dynamics between the members. Whenever Sungjong is given the chance, he goes for what he wants, much to his hyung’s displeasure. In an attempt to meet in the middle, he will change what he wants (for example, eating dessert becomes eating bread while the others all want meat and rice). In the end, all will be for naught because the time dice would roll to ‘boom,’ meaning the request would be invalid and the team will have to play another round of the game to decide on the activity and roll the dice for the time frame.

Even when he wins over Sunggyu and Sunggyu resigns himself to his fate of having bread for lunch, the odds are still not in Sungjong’s favor as the dice goes ‘boom’ again. This continues on through the episode, and you can tell each member is really assigning the activities based on their own personalities, and not because of a script.

For example, of course Sungyeol would threaten them with running on the field on a cold day. Why? “Just [cause]! We don’t have anything to do!” Of course he would do that. Sungyeol has always been the mischievous member, ever since You Are My Oppa to Infinite Showtime. It isn’t even a role assigned to him, a la Myungsoo and his chic city man role, but a role he was born with. 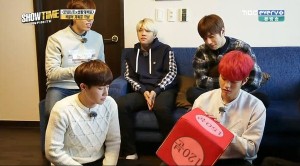 In the end, much to Sunggyu’s delight, Sungyeol agrees to have the first task be eating a meal, and thanks to the magical dice, they have 150 minutes to do so.

As we head into the final two episodes, I do hope that we get more of Infinite together rather than them doing things apart. For one thing, the whole season was set up as a way for Infinite to reconnect with each other. Or at least that was the case in episode one. Since then, there are episodes where they sought to strengthen their teamwork or to improve themselves. In a way, this does help in the long run – in that knowing oneself will help one work with others.

Apart from this, another reason Infinite are best kept together for this types of shows is that they lift each other up and complement each other. Their dynamic is very different when together, and it is amusing to watch. In the future, they will separate at one point or another and we’ll have to deal with them doing shows on their own. But at the present, they are together and the whole premise of Showtime becomes easier to swallow when groups with Infinite’s dynamics are in one location.

What say you, readers? Have you been keeping up with the episodes? How do you like Infinite best?