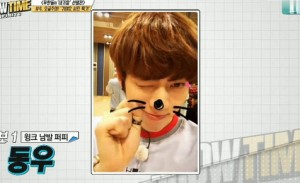 We have reached the halfway point! Six episodes in, Infinite Showtime continues to amuse, be it in small ways like we see in episode six, or in the burst out loud laughing at Infinite’s misery in episode seven. Like in episode five, Sungyeol is absent for most of episode six because he is filming in the jungle. Similar to Ranking King, they are once again fighting for a title: to be Infinite’s Betting King.

As always, Infinite reminds me of a group of kids on a trip due to the way they enjoy even the smallest game. Infinite remains to be one of the few still active idols around who can make the most mundane games (such as blowing a tissue to keep it off the ground) into something fun and interesting to watch.

As with all games, there are penalties, the first two being the most severe because Sungjong lost in both games: he was first doodled on, then had to go out and buy ice cream for the second punishment. After these two, the rest are fairly typical, but the members make the most for their opportunity to get back at the losing member. Woohyun‘s mic is taken and he has to wear a mask, much to the delight of Infinite. In revenge, Woohyun makes Hoya do aegyo as his punishment. If there’s one thing Woohyun can’t do, it’s keep quiet, and if it’s one thing Hoya can’t do, it’s aegyo. 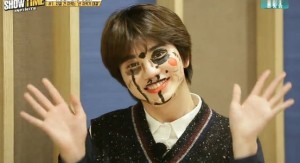 As for Myungsoo‘s punishment; because it’s Sunggyu handing it out, of course Sunggyu mentions that incident from debut. It’s a familiar story, and one Myungsoo obviously has heard numerous times. Back when they were promoting “Come Back Again,” Sunggyu was initially the center before being replaced by Myungsoo. According to Sunggyu, it was because his face, something he laughs about in the typical deprecating manner Sunggyu is known to have. Thus, he gets his revenge years later and Myungsoo’s face gets mosiac-ed.

While it was mostly fun and games, we also discover some small facts about Infinite beyond confirming that they still continue to love throwing other members under the bus for their own amusement. During the Finger Folding game, where one has to fold a finger when a member says a statement that applies to you, things got somewhat real in one part. I’ve watched almost, if not, all of Infinite’s variety shows, and never has it been said that some members have been told to leave the group during training. Sure, it should have been assumed since lineups are always fluid until it is locked, but seeing how great their teamwork is, it has never occurred to me. Or, maybe, I just don’t want to imagine an Infinite without a Dongwoo or Woohyun, or a Sunggyu who laughingly exclaims he almost left during “Nothing’s Over.” 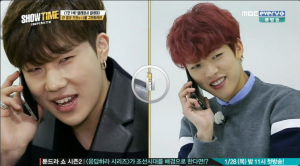 That being said, Infinite’s teamwork is one of their greatest assets and is put to the test in episode seven. With Sungyeol now back from the jungle, the next episode is testing their teamwork through ‘telepathy.’

It starts off with some warm up questions in their practice room, and by the way it’s going, it’s easy to see that they’re going to fail pretty much each mission. Which they do, and they fail in such predicatably Infinite-like ways at every turn.

The first mission is to choose a number which corresponds to a car seat with repeated numbers leaving the car and having to take a taxi to the next location. In the end, it is Hoya left alone, while the others gleefully go to the next location. It is here where the pattern is set: each member thinks about other members’ personalities and choices, so they all end up failing.

Their second mission has one member, Dongwoo, return to the car. This time, it is a relay call mission, where a member being repeated means the mission is a fail and the member would have to walk to the next location. The members all worry, except for Myungsoo who simply asks if they’ll be given the address. When he receives a positive answer, the easy going visual happily goes back to his position on the bed. It all goes well, with Sungyeol even using the oppurtunity to make Sunggyu call him ‘hyung,’ until Sungjong calls Myungsoo, thus ending the mission. 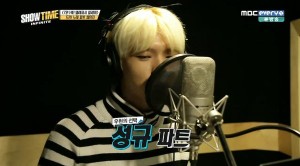 The third mission is where their fail is so spectacular, even they could not believe it. In a game where there are seven ingredients and you can only choose one, they end up bringing three cans of gas, two frying pans and two servings of meat… with no gas burner in sight. The staff, most likely taking pity, hands them a torch.

The fourth and final mission was one where they would each choose a different member’s part  of “Come Back Again” and repeats would cancel each other out, leaving those portions blank. In the end, their debut song becomes Woohyun’s newest solo song.

We all know Infinite’s teamwork is one of the best amongst their contemporaries. To take this test and say that their teamwork is a lie would be an exaggeration. If anything, just by them thinking about each other would be an indication that the teamwork is alive and well. Of course, that’s the positive spin on it and doesn’t change the fact that Hoya got the short end of the stick. Sure, he was the only member remaining in the car at the first mission, but it was a lonely ride. Then he got no phone call, took the second frying pan, had to walk in the cold, and then had no parts in “Come Back Again.”

Someone just give Hoya a break.