Tuning in to Infinite Showtime: Ep. 3-5 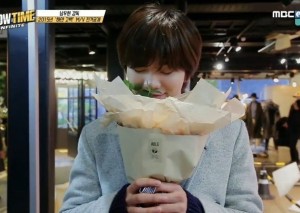 After the first two episodes, which sought to simultaneously introduce Infinite to any watchers who don’t know them while entertaining Inspirits, episodes three to five pick up the pace a bit and diversify from the previous missions. We learn one can ruin instant noodles, we get a fanservice-y music video, Dongwoo confuses us all, and we all feel Sunggyu‘s pain and suffering. There is an overlying theme and this is Infinite using their filming time to bond and reconnect with one another.

In episode three, by the time they are on the fifth dish, Infinite is already so full that they are begging for the assigned cook of the dish to give small servings. The fifth dish is easily one I might just try at home: Woohyun‘s special fried rice. Just by watching him cook, the other Infinite members start getting excited to eat, as if they were not just begging for small portions. Infinite’s years of experience once again shows when, as the fried rice is laid out in front of them, Sunggyu asks the camera man if he’s going to take the solo shots of the dish or not.

The sixth meal is samgyupsal and one simply cannot go wrong with grilling meat. I guess the same can be said about the final dish, spicy instant noodles, but boy did Sunggyu and Hoya prove me wrong. Because yes, they did just ruin a perfectly idiot-proof dish.

With Sunggyu’s words, “Let’s just eat and leave,” you would think that they’ll stick to the basics — boil water, add noodles, then the powder, and maybe some eggs. It starts going downhill when Sunggyu puts in what he assumes to be green onions, only to find out that it’s actually scallions. Saying that they taste the same anyway (they most definitely do not), he continues on. 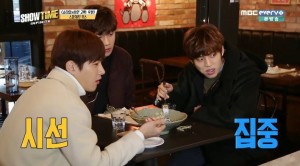 By this time, Infinite already writes ‘big fail’ next to the dish in the checklist, even as Hoya drops a cracked egg into the ramen . . . complete with egg shells. Then when they deem it finished? There’s no water left. Their clever solution? Add mineral water. As for the taste, Sungjong said it best; “The after taste is so sour.”

At this point, Infinite is just about halfway into the episode and a new mission starts: film a new MV for the holiday season. For this, they choose “Lately,” a holiday song Infinite released back in 2011. As a twist, Woohyun is directing the MV, so is it any surprise that we getting a lot of closeups, smiles, and hearts?

Covering around twenty minutes of the episode, it was fun to watch, but at the same time, a matter of passing the time. While it was a joy, there simply is not a lot to talk about. There a different scenarios for each member as they confess their love, and they all make the best of their own time.

While it does not provide as much laugh as the other half of the episode, it was still entertaining in some parts. There is also the added benefit of Infinite continually being noisy and messing about while a member is filming. At the end of the episode, they show the new MV, just in time for the holidays.

Episode four is not a continuation and starts us off with a new location and mission. It focuses on being thankful. It opens with five members — the missing members being Sungyeol, who was filming Laws of the Jungle at that time, and Sunggyu, who was temporary MC in Weekly Idol.

Before we get any further, we then find out that Sunggyu is actually setting up a surprise camera, specifically for Myungsoo and Dongwoo, who had answered previously that they are most thankful to their teachers. So, in true K-variety fashion, Sunggyu and the PDs have brought in their teachers. 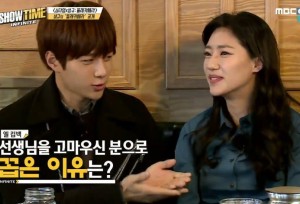 We learn a bit about the teachers and their relationship with Myungsoo and Dongwoo, as well as how they were as students — Myungsoo being the same, persistent person, and Dongwoo talking jargon and rambling about even back then. We also find out that Dongwoo hasn’t seen his teacher since he graduated middle school, while Myungsoo visits his every Teacher Day – which brings a slight worry because he might notice her.

While the staff act likes it’s a normal shooting, Sunggyu preps the two teachers and in two rounds, the teachers go out in disguises to see if Dongwoo or Myungsoo will recognize them. The first round is a success – they don’t think anything is wrong at all, and are focused on the food.

The second round, this time with Dongwoo’s teacher not wearing his mask, is another matter. From the very start, Dongwoo’s eyes focus on him. He recognizes him, “Student Department Head Teacher?” but Sungjong neatly says “That’s the Audio Director who does the audio check,” as if Dongwoo mistaking people for other people is a common thing (apparently, it is). 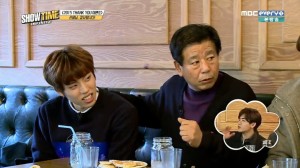 After, Myungsoo’s teacher comes back out as a server, serving them dessert and setting the plates in front of them. For a second, we think Myungsoo will recognize her because they make eye contact – and then he goes back to the food. In an unexpected twist, it is Dongwoo who recognizes her. “Who’s this?” he asks, even adding that he feels like he’s seen her before.

Sunggyu then comes out to put an end to everything. He acts as if nothing is wrong, until he asks them what was weird that day. Hoya is the first one to get it, exclaiming that the man really was Dongwoo’s teacher, but for the sake of the whole surprise, Sunggyu shoots him down. A while later, the teachers enter and the two react as expected. Dongwoo is happily rambling about, and Myungsoo starts spouting pure and utter nonsense.

If episode three was all about the fanservice (mixed in with horror from that ramen), this episode is all about being thankful and showing it. It was a funny thing that Dongwoo, who hasn’t seen his teacher for 10 years, recognized him almost instantly, while Myungsoo, who sees his teacher ever year, did not. In his defense, the teacher somewhat expected it because Myungsoo is not someone who notices anything unless pointed out to him. 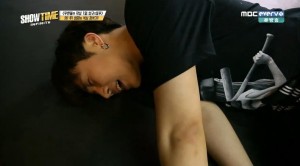 Meanwhile, episode five is on what the members want to try in 2016. Sunggyu, our ever reliable lazy Gyu, wants to try boxing, and is joined by Dongwoo. It starts off as expected: Dongwoo is energetic and Sunggyu groans his way through the warmups. But when the actual boxing basics teaching start, Sunggyu somehow proves to us that he did take taekwondo and judo when he was younger; he quickly adapts to boxing. Maybe he can join his unexpected close friend, VIXX‘s Leo, for some more lessons.

Sungyeol and Woohyun opt for a tarot card reading. Sungyeol is a fan of tarot cards, getting his fortune told every quarter and whenever he’s in a slump. Woohyun, who was in a slump most of last year, joined on Sungyeol’s recommendation. After their initial reading, they learn the basics and then tell each others fortune. Or at least they were supposed to — in true Infinite style, they decide to make things up for the laughs.

Sungjong, on the other hand, decides to relearn how to drive. He has his license, but he’s one of those people who never uses it. And his driving teacher? His manager. From the very start, it’s a worrying experience. He doesn’t even know which pedal is which! Even while he is driving around the parking lot, we can see that his manager is also nervous. At least Sungjong got to spin around the parking lot several times before hitting the roads. 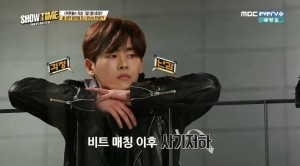 For Hoya and Myungsoo, they decide on learning how to DJ so that they can improve their music instincts. While one may expect Hoya to be better at it due to his natural instincts as a dancer, it’s ultimately Myungsoo who initially does better. By the end of it, the initially tentative and nervous machine-illiterate Hoya improves. They later finish the whole episode with a DJ show in front of an audience.

While there is a overarching theme with them getting closer together, each episode emphasizes a different aspect. Episode three is about doing something for the fans, episode four is thanking those that helped mold them to who they are today, and episode five is their own self-improvement. It makes one wonder if this will continue for the remainder of the season, and the only way to find out is to continue watching.

What say you, readers? Did you enjoy these three episodes? Sound out below!