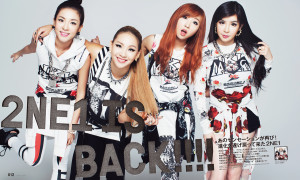 Hi everyone! Hope you all had a peaceful Sunday.

YG Entertainment is also joining the comeback party: before Ikon‘s return in December, we are getting a new Double B track. But, in addition to that, YG has just put out another one of their notorious “Who’s Next” posters. With a date of the 21st of November, fans are becoming increasingly optimistic of a 2NE1 return.

The prospect of 2NE1 making a comeback to the K-pop scene is big news, as the group has effectively been on hiatus since the Bom drug scandal. Photos of Bom leaving the YG building a few weeks ago had fans hopeful of an eventual return, after CL‘s US debut activities had wrapped up, though that’s technically still pending.

The speculation increased significantly after one of YG’s choreographers, who is known to have revealed Big Bang‘s latest comeback before it was officially announced, started posting clues on their own Instagram account.

And now we have these teasers from YG. I honestly have no idea what is going on, but I would like to see the ladies of 2NE1 releasing music together. At the same time, the part of me that is increasingly distrustful of YG is expecting the announcement on the 21st to be for a DVD or something, like what happened with Winner.

What do you think, readers? Are we getting us some 2NE1 music soon? Or are we being trolled yet again?