Ever since the days of Mix & Match and WIN, iKon were known for their hard-hitting image and strong hip-hop sound. Rappers Bobby and B.I were particularly known for being some of the most skilled idol rappers in the industry, and the group as a whole had cultivated a strong hip-hop image.

In light of this, “Airplane” and “My Type” were a little surprising to see from the boys, as they were much sweeter and softer than what we have come to expect from the group. In contrast, “Rhythm Ta” is a return to the sound that they were most known for in their pre-debut days.

Although this is a comfortable return to the genre that made people fall in love with iKon in the first place, “Rhythm Ta” has failed to live up to the group’s usual standards.

The beat is solid throughout, but is ultimately an infectious yet underwhelming YG Entertainment earworm along the lines of the contentious “Good Boy,” “Zutter” and “Bang Bang Bang.” The beat is definitely catchy, but lacks anything unique that truly sets iKon apart, instead looking like yet another attempt to capture an authentic hip-hop sound. 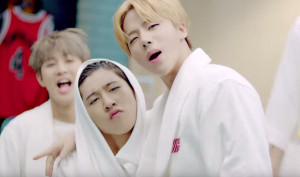 The MV looks hurriedly composed, as it is basically a series of cheesy hip-hop stereotypes cut together. We see every ’90s hip-hop trope imaginable: in one scene, the members are decked out in matching red basketball outfits; in another they bounce around in flash cars; and then there’s B.I’s cornrows. The MV can, however, be praised for featuring a number of different settings, and a particularly stunning rain scene, where the camera quality is so high that you can see each individual drop.

Since the MV does not have a storyline, it would have been worthwhile to incorporate some killer choreography; it would be sure to elevate the MV. Unfortunately, the production team does not take up this opportunity, instead coming up with a rather dull video that is simply a mish-mash of settings, when there was great potential in the choreography.
[youtube http://www.youtube.com/watch?v=y4mgw8AcwL8]

Perhaps because “Rhythm Ta” is more of a hip-hop song rather than a heavily vocal-based song, rappers Bobby and B.I end up dominating the song and MV. This comes as no surprise, seeing as the two have always been the posterboys for the group. However, in the case of “Rhythm Ta”, this disparity between members’ roles becomes ridiculous when you realise that Chanwoo only has one part at the end, where he simply sings a subdued “Na na na na” in the background. The chorus also deserves a dishonourable mention, as it almost entirely consists of the cringe-worthy line “We gon’ get it poppin.”

iKon, particularly Bobby, have been known for their strong lyrics which often call out the fakeness of the idol industry. The lyrics of “Rhythm Ta” encourage the listener to simply enjoy the music, but also includes lines aimed at their industry peers such as “We don’t try to act cool, for example, idols these days.” 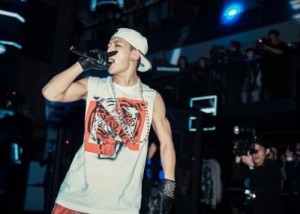 Unfortunately, such a lyric clashes with the hip-hop iconography used in the MV, which does make iKon look like they’re trying too hard to be something they’re not. In the end, though, iKon remind us not to take things too seriously, saying “This is just a song so get on the rhythm.”

In terms of delivery, “Rhythm Ta” is able to save itself in some parts. Bobby delivers his lines with his usual grit, resulting in a strong performance that matches the message of the song. Junhoe‘s solid pipes are also a highlight, with his heavy voice suiting the song particularly well. The other vocalists, however, sound soft compared to the overall punchiness of “Rhythym Ta”, which perhaps isn’t very fitting.

In “Rhythm Ta”, iKon and YG Entertainment have missed a golden opportunity to set themselves apart from the pack with a distinct, hard-hitting sound. The MV has not had much thought put into it, and the outfits, locations and props do everything except make iKon look like a serious force in the industry.

For a debut two years in the making, this is disappointing. But thankfully, iKon have a strong fanbase and tonnes of talent, and will surely be able to come back even stronger with their future songs.