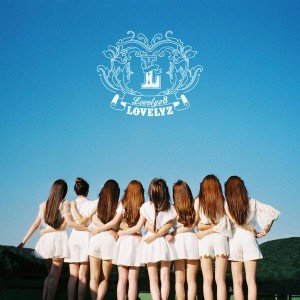 Lovelyz  has had a long and turbulent history for a group under a year old. From a long-delayed debut to false accusations against member Seo Ji-soo, the eight ladies have had a difficult journey. But with the release of their first mini, Lovelyz8, it’s clear they’re ready to move on with their careers , Sadly, while the tone of Lovelyz8 is full of optimism, the music induces far less.

“Welcome To The Lovelyz8” is ostensibly the intro track , but it lacks a few vitals elements. Like any vocals whatsoever. It doesn’t even sound like a song. It’s more like the background noises of some dating sim, albeit particularly melodic ones. It also sounds nothing like the rest of Lovelyz8, which is quite uniform in sound.

“Ah-choo” is the title track of Lovelyz8, and it’s sweet, almost to the point of excess. The whole track is nearly dripping with sucrose in the form of some very ’80s-esque synths. There is a great piano line that would be better served if it was more audible, as the gentler sound would match the tone far better.

The metaphor used is a bit off-target as well. Theoretically, comparing trying to hold in the urge to tell a boy you like him is like trying to hold in a sneeze makes sense. But while the former is pleasant, the obnoxious itch of a sneeze that won’t sneeze tends to drive people around the deep end. Still, “Ah-choo” is cute and harmless enough.

“Shooting Star” is the requite ballad of Lovelyz8, and it’s rather lovely (pun intended). The subtle organ influences on the keyboard are charming and pair perfectly with the gentle vocals. Lovelyz harmonize with skill and grace, retaining their youthful sound, despite the more mature topic of ending  a first relationship. The synths here give “Shooting Star” a hopeful spin. They may have broken up with their boyfriend, but it was for the best, and next time, they’ll be better prepared for a relationship. 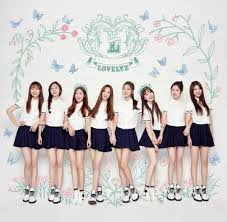 “Hug Me” opens with a stuttering synth riff that sounds like it might be “Candy Jelly Love’s” younger cousin. The rest of the song falls right in line– it’s very upbeat, laden with sound effects, and is pure ’80s bubblegum synth pop. Sadly, “Hug Me” falls into the trap of equating a high register with youthfulness. Everyone sounds incredibly nasal as they struggle to maintain the soprano range, and it’s not pretty to hear. At all.

“How To Be A Pretty Girl” is a flawless example of “good news, bad news”. The good news is the synths are dialed back; the bad news is the video game sounds effects are dialed up to eleven. The frenzied nature of the song really works, but the lyrics are beyond repetitive. And of course, “How To Be A Pretty Girl” is a good confidence boost for the average girl, but, seriously. A woman is more than her looks, people. Confidence can come from many sources.

Props must be given to Lovelyz for “Sweet and Sour” wherein they accomplish a rare task for girl groups with a cute concept: they are actually on a date with the guy they like instead of just pining. Sadly, while their emotions keep pinballing back and forth between excitement and nerves, “Sweet and Sour” is straight-up sugar. The altnernation between longer notes and staccato ones in the chorus is enjoyable, but on the whole, “Sweet and Sour” is just filler.

Lovelyz8 closes on “Rapunzel”, which is the best track on the mini by a mile. While it’s as synth-driven as the rest of the album, the lower range provides a bite against the higher and softer vocals of Lovelyz. It’s upbeat without hitting the breakneck speed that characterizes the mini. The message of saving a fairy-tale princess themselves rather than waiting on a prince is exactly the gentle girl power that “How To Be A Pretty Girl” fails to achieve. “Rapunzel” manages to be sweet without being sugary.

Lovelyz8 is, in a word, cloying. It gave me three new cavities. It’s drowning in sweet vocals, backed by sweet lyrics, all over an overload of sweet synths from the bad part of the 80s. The songs all blend together, unable to differentiate themselves underneath the unending sugar. The vocals suffer most of all, with every track being too high for the ladies of Lovelyz to sing comfortably. Everything sounds so nasal. Tracks like “Shooting Star” and “Rapunzel” show that Lovelyz has the vocal skills for deeper layering and more complex harmonies, but that’s just not here.