It’s been well over a year, but f(x) has returned! Things were shaky for the group after Sulli took a hiatus in the middle of their Red Light promotions last year, but her official departure from f(x) was followed by news of their comeback. Fans rejoiced, not for the member loss, but for the fact that we would get new music from the dynamic ladies. It was a tiresome wait, but it was worth it.

F(x) has never been a group known to stay in the box musically — unless you’re referring to their MVs. The infamous SM boxes are practically members themselves, playing the role of silent visual in the background. Fans criticized the boxed sets as their use grew in frequency despite the growing popularity of their artists. When you recognize the same set being used in EXO, SHINee, and Super Junior‘s videos, you question the laziness of MV directors for not actually thinking outside the box. Thankfully, all the feedback paid off as f(x) escaped their stuffy confines in the ironically titled “4 Walls.”

Technically, f(x) is still in a box, but it’s a house. Houses have four walls; it’s the only way they can stand up and provide safe shelter from outside elements. This metaphor is reflected in the lyrics which compare a relationship to a home that is complex and a reflection of its inhabitants.

In the video, we see the members going about their day as if nothing has changed, but things are not always what they seem. Matched cuts provide a seamless integration between members, showing a fluidity in their actions. The actions of one affects another, which threw me off a few times as members switched back and forth in the cuts. One could read this as representative of a complex relationship that has give and take. If one’s partner does something, it creates a domino effect that sets in motion a series of actions which dictate the path of the relationship. 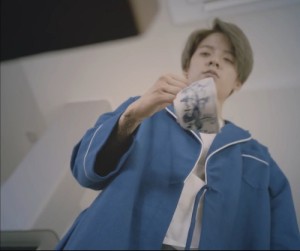 To better explain this, we need to examine what happens to each member. It begins with cuts of Krystal, Victoria, and Luna staring wistfully through a window. As Krystal puts on her robe, it match-cuts to Amber copying her action. Are Krystal and Amber the same person, or two people with similar habits? When you’ve been in a relationship long enough, it’s not uncommon to take on the other person’s traits. F(x) have been together for so long that it’s natural for them to mimic each other’s mannerisms. They are a cohesive unit, but what happens if someone falters?

The image of Amber dropping a cup is followed by Luna spilling tea onto a table. Without Amber’s cup to catch the tea, it overflows into a puddle on the floor. Victoria slips on this puddle and finds herself transported into a forest.

The forest scene shows f(x) getting lost among the trees while stumbling upon each other in frozen moments. Krystal spots Victoria with the teapot caught in the air as Luna cuts her feet on pieces of the broken cup from earlier. Amber finds a horse in the forest and sees Luna levitating several feet from the ground in the same falling position as Victoria from the previous scene. It’s all quite perplexing and likely requires a dream analysis to understand the symbolism of these moments. 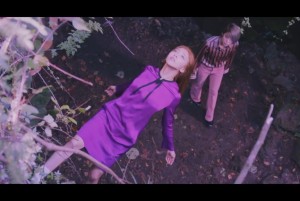 I interpret the forest as an alternate dimension that places the members in different roles from what they did in the house. What if Victoria spilled the tea instead? What if Luna hurt herself from the cup or fell from the spill? What if Amber never dropped that cup? Many people ask these types of questions when the dynamics of a relationship change. With this in mind, with Sulli gone, how does that change the group now? Perhaps that’s the real question being asked here. Can the group survive after losing a member, or will this change alter their universe?

We can go on forever on various theories behind the meaning of this video, but I want to focus on the pros and cons. One positive is that f(x) is O-U-T-S-I-D-E the SM box! They’re frolicking in a forest, looking ethereal and lovely, and I’m so enamored with the framing of each member. I love how the director has them peeking through foliage like mystical fairies. It’s a vibrant departure from the gothic lolita nature of “Red Light,” which showcased their tougher side. We see f(x) in a softer setting for “4 Walls,” and I’m not mad at it.

As usual, the styling is top notch. All four ladies looked breathtaking. I feel like a proud older sister seeing how much they’ve matured over the years. Luna’s purple dress was probably my favorite outfit, yet I did wonder if the purple butterfly had any connection to her for that reason. It’s probably nothing more than a coincidence, but if anyone has ideas regarding this, please comment below! 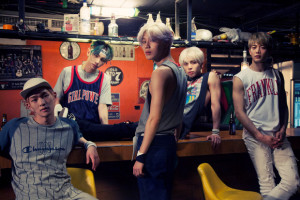 Where the song is concerned, this is definitely a tune that has to grow on me. Personally, I’m not a fan of house music, so this genre left me a little underwhelmed. However, I enjoyed the deep trance beat and the resounding dings of the bells interspersed throughout the song. A point of contention I do have is that the chorus sounds close to SHINee’s “View.” It’s not a huge negative, but I prefer not to mentally cheat on a song by thinking of another one when I hear similar chords. I’m trying to remain faithful to f(x), so I can’t have SHINee on my mind while listening to this.

Another small criticism I have is the absence of choreography. Because it’s from the house genre, a part of me wanted a few dancing scenes, but the overall theme of the video was so well-done that it didn’t matter in the end. Knowing SM’s usual playbook, we’ll probably see the release of a dance practice video or performance MV to satisfy the curiosity of fans eager to see their choreography. F(x) excels at dancing, so I’m looking forward to seeing their stages for this.

Honestly, I’m so overjoyed by their comeback and thankful that this song and video didn’t let me down. F(x) continues to surprise me with their music, which is why they are one of my favorite girl groups. They’ve proven they can push beyond expectations while maintaining their brand. The ladies excel at making all of this look effortless, but we know they worked hard to reach this level in their careers. While the song could be alluding to changes in a romantic relationship, I prefer to see “4 Walls” as a mirror into the long-standing relationship the members have with each other. As long as they are strong enough to support each other, nothing will tear them down.