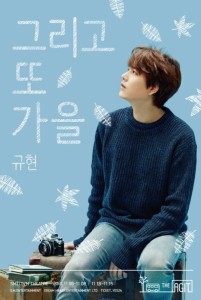 Kyuhyun recently made his solo comeback, and in accordance with SM‘s attempt to brand him as an “icon of autumn” of sorts, his album was predictably dominated by an overwhelming majority of ballads for the season. That isn’t necessarily a bad thing — his smooth, tenor voice suits the genre considerably well, and He had mentioned after all that he had originally joined SM in hopes of becoming a ballad singer.

However, some listeners have commented that they are growing tired of this consistency in Kyuhyun’s musical works, and expressed a desire to hear the singer try something “out of his comfort zone.” Heck, even his best friend, TVXQ‘s Changmin had once made a video appearance at Super Junior’s Super Show 4 in Japan to tell him to stop singing ballads: “Dance, and sing some rock or something. Or if that doesn’t work, do cross-dressing. Let’s stop singing ballads, okay?”

The truth is that Kyuhyun has sung and performed non-ballads on a number of occasions that may be overlooked by those that don’t follow Super Junior’s activities particularly closely. As a matter of fact, some of his most memorable performances are non-ballads, partially because of how well he is able to execute the pieces with his skilled vocals, but also because of the surprise that comes when the singer tries a new genre and does impressively well in pulling it off. So without further ado, these are five of his highlight non-ballad performances I have picked from his singing career.

This rendition of “Masquerade,” featuring Trax’s Jungmo on the guitar, is quite possibly one of Kyuhyun’s best Immortal Song performances for me (with the other being “An Etude of Memory”). His choice to turn this piece into a rock song came as a surprise to all, given that the original, although fast paced, doesn’t have many rock-like elements. It’s endearing to watch him attempt to adjust his stage mannerisms to a more rock-like style, and although it started off a little awkward as Kim Gu-ra rightfully pointed out, he gradually grew more natural as he became absorbed in the song.

Genre choice aside, the highlight of this performance is probably its manifestation of his singing prowess – his controlled, powerful vocals in the refrain and those final high notes in the end render the stage an overall amazing performance. With that performance having happened, I’m surprised SM hasn’t made him attempt more songs of such style after this.

2. “To the Beautiful You” (Duet with Tiffany of SNSD)

Despite the mess that was the drama that this song belonged to, the OST collection of To the Beautiful You contains several gems, this song being one of them. The similarly powerful voices of Kyuhyun and Tiffany fit well in executing an upbeat, driving song like this one, and both singers are also more than capable of pulling off the abundance of runs and high notes that this song contains. In addition, their vocal colours also fit interestingly well together, making their harmonies throughout the piece sound fairly pleasant. Although Kyuhyun’s OST discography probably consists of ninety percent ballads, this rare, SM-initiated exception was most definitely a welcomed one.

3. “Flying, Deep into the Night” (Original by Lee Moon-sae)

This piece existed originally as a song by veteran singer Lee Moon-sae, but Kyuhyun’s cover of it was included as an official track on his first solo album, and it also eventually led to a duet between the two on a new song released earlier this year. On one’s first listen to the album, this piece would stand out significantly given its abrupt change in tempo in comparison to the other songs in the collection.

Playful and lighthearted, it offers a change from the melancholy tone of the rest of the album, and the instrumental track that accompanies it gives it a very country-like feeling makes it sound significantly different from anything Kyuhyun has tried before. His voice, quieter and lighter in this piece, also conveys a dreamy feeling that matches the mood of the song’s lyrics create.

This performance of “Isn’t She Lovely” by Kyuhyun shows his versatility in multiple aspects. Not only is the song of a different style from his usual solo works (or Super Junior’s works for that matter), it is also one of the few times he has brought and played an instrument on stage. The harmonica number is one that he presumably practiced hard for before this performance, given that if you watched Super Junior’s varieties from that time, he could be heard playing the tune backstage on multiple occasions. And it certainly paid off – he pulled off that stage without a hitch, and appeared to be quite proud of it at that, as his cheeky smirk after the first harmonica interlude suggests.

A list of Kyuhyun’s best non-ballad performances is never complete without this one. As a part of SMTown Week two years, Super Junior had the brilliant, almost parodic idea of switching the roles of their main vocalists and rappers, and as a result, this performance happened. If the introductory VCR wasn’t enough to make you facepalm, the two singers managed to bring the exact same “swag” onto stage, and the sound of the audience cracking up was my exact reaction throughout the video.

Ridiculous stage mannerisms aside, the Ryeo-namic Kyu-o pair executed the song relatively well given they have rarely (or never) touched hip-hop on any other occasion – their rapping managed to keep up with the flow and speed of the original impressively well, and their honey-like voices in the refrain was just music to one’s ears. If you have time, also take a look at the complementary performance to this stage, featuring Eunhyuk and Shindong performing an emotional ballad (and like this pair, pulling it off surprisingly well for the most part).

Which one of these performances are your favourite? Are there any more gems you’d like to add to the list?