'The Advocate: A Missing Body' Takes a Stab at Dark Humor 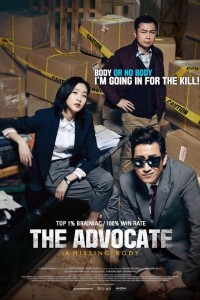 I cannot tell a lie: Lee Seon-gyun is really attractive and was admittedly the initial appeal to watch The Advocate: A Missing Body, his latest film. Even though he’s been in many movies and dramas since the early ’00s, Lee didn’t reach popularity until his appearance in The 1st Shop of Coffee Prince in 2007, which is also when I was introduced to him. Since then, he’s built up a reputation as a diverse actor with charisma and talent to be reckoned with, and as more than just the kind, gentle second lead for which he reached initial fame.

In fact, in The Advocate, Lee plays a completely different character from Choi Han-sung and instead makes a perfect, contrasting follow-up to his last film, 2014’s A Hard Day, in which he played a cop trying to cover up a crime. Byun Hyo-sung is a hotshot lawyer with all the arrogance and grease associated with the stereotype, complete with slick hairdo, beloved luxury car and finger gun greetings. Hyo-sung is actually kind of a jerk, especially at the beginning of the film, but unsurprisingly so. With a perfect record of wins in every court case, Hyo-sung is the ace at his law firm, and he knows it after building up quite the reputation for winning so many cases for big name corporations and rich people alike. However, things change when he is assigned to represent the defendant of the Shinchon murder case.

At first, Hyo-sung is reluctant to take on the case, claiming it “pays shit” and that there is a reason public defenders exist, but Moon Ji-hoon (Jang Hyun-sung), the CEO of the company he recently defended in a drugs side affect case, is insistent that he take the case. Kim Jung-hwan (Choi Jae-woong), Byun’s client and the CEO’s chauffeur, claims his innocence, and since the body of nursing student Han Min-jung (Kim Yoon-hye) remains to be found — only blood and a weapon were located at the crime scene — Hyo-sung thinks he has a shot at winning. Unfortunately, he finds himself going toe-to-toe with Jin Sun-mi (Kim Go-eun), a former flame and junior colleague who is rising in the ranks of prosecution. While he considers himself a better lawyer, as he has more experience and clearly more gall, Jin doesn’t let him get a word in edgewise and is quick to shut down his smarmy talk. 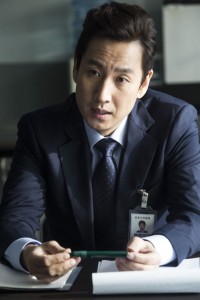 After rattling Sun-mi, Hyo-sung gathers evidence for his case, determined to win despite the many cards stacked against him: An eyewitness placed the chauffeur at the scene of the crime, he has a prior assault charge, and he has no one to corroborate his claim that the dead student was his lover. Still, Hyo-sung puts together a compelling case, complete with an experiment involving scaling the building and a testimony from a blood spatter analyst, but to ensure his victory, he even manages to lead an acquaintance of the chauffeur to testify that he met Min-jung, though it’s clear that he didn’t.

The case goes to trial, and after cross examining his witnesses and experts, Hyo-sung stands poised to win despite Jin Sun-mi’s best efforts to paint the defendant as a violent stalker. Just as victory seems inevitable, and Hyo-sung rests his case, Jung-hwan confesses to killing Min-jung, leading to his return to prison and Hyo-sung’s loss and confusion. From his search for evidence to fight the case, he is confused and genuinely believes that Jung-hwan is innocent. He even plants the same seed of doubt in Sun-mi’s mind. It doesn’t help that the body still has yet to surface, and Jung-hwan doesn’t even know where it is. Convinced that his hunch is right, Hyo-sung begins a winding quest to figure out what really happened.

On the surface, The Advocate is a compelling story with sufficient drama and tension among the characters and in the plot itself. Unfortunately, the film fails to reach its full potential in execution. The story of Hyo-sung, the Shinchon murder case and how it all ties together is intricate, to say the least, making for many moving parts in the film. While the non-linear nature of the narrative works to show they come together, the film moves too quickly from scene to scene. Just as a key detail or tidbit of information is revealed, we suddenly jump to the next shot, which not only makes the film move at a breakneck pace in certain places but also doesn’t allow the revelations to sink in and simmer before moving on. With an almost convoluted story, these brief moments are necessary to keep the audience fully engaged instead of confused. 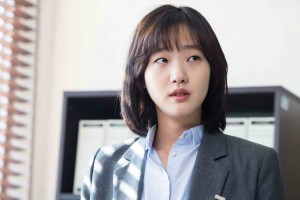 These stark jumps are not helped by the odd tone of the film. While director Heo Jong-ho clearly establishes from the onset that this will be a dark comedic legal procedural, it doesn’t stick to that consistently. The bulk of the narrative is rather serious and suspenseful but bookended by much lighter comedic moments in the opening and conclusion, particularly through Lee Seon-gyun’s caricature portrayal of Byun Ho-sung. As such, the tone is uneven, trying to be creepy but making it difficult with an exaggerated leading character and moments of humor.

On top of that, Kim Go-eun’s more level-headed, almost dull role is lost to the more expressive Lee Seon-gyun. While this is partially due to the nature of their characters and their relationship, it’s also heavily influenced by their chemistry, or rather the lack thereof. Their supposed former love is difficult to imagine considering the half-hearted portrayal and unequal dynamic. Sun-mi may have a sharp tongue, but her body language goes contrary to that, especially compared to Hyo-sung’s self-satisfied smirks and jabs. Some may argue that it’s the complexity of a character being forced to go against a past lover and senior former colleague, but she later on in the film shows more aggression when hijacking a police car and ordering arrests to serve her purpose. As such, I am skeptical to this explanation and just find that Kim simply lacks the chemistry with Lee Seon-gyun to make their verbal sparring and previous relationship believable.

Despite the poor execution, Lee Seon-kyun’s performance as Byun Hyo-sung and an intriguing plot are enough to carry this film. It may drag in certain places, but the quest to find answers to this case is engaging enough. Just as you think you’ve figured out what happened with Han Min-jung, Hyo-sung makes another discovery and connects two pieces, leading to more questions. By the final act, the film makes the big reveal, and while it relies a bit too much on heavy exposition, it is satisfying and gives great redemption to the weasel of a lawyer.

_________
The Advocate: A Missing Body opens October 23 in select theaters in the US. This film is not rated and features scenes of graphic violence and limited language and drug use.