T-ara Has a Pleasant Comeback with "So Crazy" 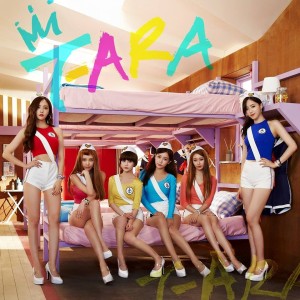 Love them or hate them, T-ara is back! The girl group has returned with a Brave Brothers song of their own, “So Crazy.” With a pleasant enough song and an amusing MV, T-ara jumps toward the top of summer girl group comebacks.

Lyrically, “So Crazy” is nothing to really write home about, in that it’s your typical pop love song about a girl being crazy over a guy.  One section does stand out a little bit:

Typically, we think of men serenading women, but the lyrics of “So Crazy” switch that up. This time T-ara wants to do the serenading. Roles in the course of wooing have been altered, and it’s a nice change. Girls should be able to serenade boys, too!

From a musical standpoint, “So Crazy” is one of the better summer tracks this year, which isn’t saying much. It is just another song in the steady decline of Brave Brothers‘ tracks. Regurgitated, repurposed beats and general sounds placed too heavily over vocals seem to be the producers’ status quo now, and it’s a disappointment.

The song essentially sounds like the tracks AOA is currently using to gain popularity, and veterans like T-ara should be given something more … T-ara. We need the catchy, yet not-currently-popular instrumentals that T-ara made their own. Maybe instead of trying to make a name for himself in the American market, Brave Brothers should start producing actual good music in Korea, the country that made him a hitmaker initially.

The introduction was awkward and unneeded, almost to the point of turning off anybody who wasn’t a Queen or reviewing the MV and song. Luckily, after time, the song picks up some steam and ends rather well. The hook is catchy and dance-able, which is pretty important in a summer track. People probably won’t play “So Crazy” on repeat nonstop, but you won’t turn it off if it came up on a playlist.

Outside of the music, “So Crazy” is pretty classic T-ara. First, we have an extended MV featuring a storyline. “So Crazy” is a spin on the ever-so-common Ugly Duckling trope: girl of “comely” appearance becomes beautiful and people fawn over her. T-ara has done another version of this type of story previously with “Like the First Time.” However, in their latest comeback, T-ara isn’t so much changing their appearance to win over a guy, but rather changing their appearance to stop being crapped on by everyone. 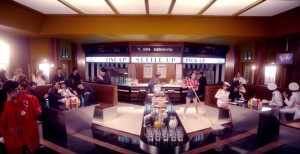 T-ara is cast as a group of women working in the “T-ara Cafeteria,” with various positions such as cook, waitress and janitors. Their workplace appears to be a hotspot for military personnel on leave, as well some riff-raff. Because of this, they are treated in a subpar manner, to say the least.

The amusing thing is that it’s clearly not all about their looks – a non-classic K-pop beauty servicewoman is used as the antagonist: the men dote on her and she also isn’t kind to T-ara (who still looks quite fetching in their work uniforms).

When they return to the barracks, an officer hands them a flier for a “Miss T-ara” contest. Then, the beautification process occurs, leading to them being even more fetching and winning over the mass of formerly jerk servicemen. After winning, they are treated better by their guests; even to the point of the men actually do their work for them. 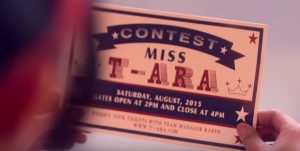 Some are either going to call the plot sexist or say it’s girl power. I’m going with the latter. The girls are hard-working, and know what it takes to get some decent treatment. The fault in the necessary tactics being altering their appearance lies in the viewer who treats people better because of their looks. T-ara also is not a pile of mush and subservient; they never fully go fragile-damsel-looking-for-a-man. If anything, they gain even more confidence and exert their power to stand-up for themselves in demand for better treatment.  It’s not about getting a man, it’s about respect. “So Crazy” takes a more progressive approach to the Ugly Duckling plot device.

T-ara and their military-inspired outfits are a win; even more so when considering these outfits actually fit into the MV’s storyline (unlike others.) The group is in some sort of service, so naturally, they’ll wear outfits to fit that concept. Extra points are earned with the uniformity of the outfits. They do not look like someone took different military divisions and threw together a hodgepodge of uniforms. 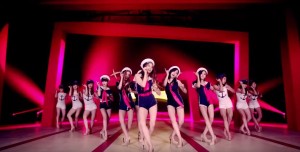 For the dance in particular, it almost feels like “Roly Poly 2.0,” and in a good way. The choreography, from what we can see of it, combines some classic disco moves with a little bit of cuteness. This is right out of T-ara’’s playbook. The added sexy moves take it to another level.

While personally waiting for another track and “bad” concept like “I Go Crazy Because of You,” “So Crazy” isn’t that bad. It could have been better of course, but that can be said for most girl group songs this summer –especially those by Brave Brothers.  While not hugely memorable, the MV was nicely comedic and you can’t deny the pretty visuals on display.