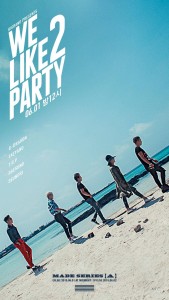 Big Bang has managed to run through many concepts throughout MADE. So far, we’ve had broken and punk-esque, R&B sex jam, and a wild dance track. Now, the best song MADE has given us so far is paired with what may be the best concept they’ve ever done: themselves.

“We Like 2 Party” is everything you wouldn’t expect based on the title and companion track. This is not a high energy song that is most at home in da club. “We Like 2 Party” is laid-back and chill. This is not a song about going out and getting turnt for the sake of going out and getting turnt. It’s not about getting some ass, or being seen having more fun than anyone. In “We Like 2 Party,” the party is wherever your friends are, and what matters is the good times you have with them.

Musically, “We Like 2 Party” is one of Big Bang’s simplest works. It starts off the “can’t stop, won’t stop” declarations typical of party songs but then folds into a lovely acoustic guitar. A couple more guitars, some drums, and some epic stomp-clapping are all that happens in “We Like 2 Party.” The bridge is marked out by a distinct lack of instrumentation, and the chorus is chanted more than sung. But you know what? It works. Christ on a stick, it really, really works. The simple instruments combined with the chanting build “We Like 2 Party” into a classic anthem, something truly timeless.

The lyrics of “We Like 2 Party” contain an element of true self-awareness, an oddity in a party song like this one. Big Bang knows that they’re drinking too much, and they’ll regret everything when the morning comes, but that isn’t a good enough reason to stop. This is a conscious choice to enjoy life now, even if it’s gonna hurt later, and it works. “We Like 2 Party” is the song going in the back of my head when I’m sitting with friends, drinking too much, knowing I’m going to have a hangover I can feel in my teeth, but I’m laughing too hard to care right then.

The MV is one of the more recent trends for summer songs: candid footage of Big Bang hanging out, going about their day and straight goofing off. 2NE1 did it, Sistar did it, but Big Bang does it best. For one, the whole point of “We Like 2 Party” is to let loose with friends, so anything else would be weird. For another, they never look forced or directed unlike either of the other groups, and the disparate places filming happened are worked into a sense of order by dividing the MV into three distinct parts. 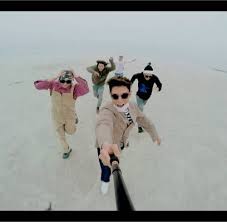 First is the “day in the life” segment. Remember a few weeks ago when netizens spotted Seungri and G-Dragon on the subway? That was for this MV and was clearly staged. Yet, it’s easy to forgive when the MV doesn’t try to hide the camera crew cruising alongside Taeyang‘s car or GD filming Seungri on an escalator. It’s also clear that while the locations were handpicked, the camera crew just told Big Bang, “Go nuts, guys,” and it paid off. Selfie sticks, T.O.P. instagramming while go-karting, bad car dancing; this was glorious. I don’t think I’ve ever laughed harder at a MV than I did when G-dragon head-butted T.O.P. in the dick.

Next is the “sloshed in a hotel room” segment, and while it is the most blatantly staged, it also had the guys clearly letting loose, with the cameras just there to record the entertaining bits. After all, some of those bottles obviously hadn’t been opened, but many others obviously had. Daesung sings into a banana and plays a wine bottle with a wine bottle, furniture is danced on, inflatable marine life is molested, and a good time was clearly had by all. Side note: I’m fairly certain the reason they’re linking arms during the chorus at the noraebang is because they couldn’t all stand on their own. 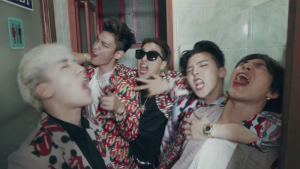 Last is my favorite segment: the “vacation footage.” This really looks like someone just handed Taeyang a camera and sent them away for a weekend, with only one barely visible camera guy as evidence otherwise. Most of the time in found-footage MVs, the illusion is broken by the fact that the idols never lose awareness of the camera, but here they do. Big Bang isn’t performing as they toss a hungover Daesung into a pool in a bathrobe; they just want to chuck their hungover buddy into a pool for the lols. This is Big Bang having fun the way “We Like 2 Party” advocates — goofing off with friends while you can.

I cannot for the life of me understand how anyone could have anything negative to say about “We Like 2 Party.” Yeah, it’s basic, but there’s a reason “go back to basics” is constructive advice. Sometimes, you need to strip away the fame, the sex, and the insanity and work with who you are underneath the trappings, and “We Like 2 Party” does just that. No, neither the song or the MV are groundbreaking art, but they’re not trying to be. They’re trying to be a great summer anthem and candid footage MV that lets us see who Big Bang is when they’re not Big Bang, and those goals are knocked out of the park.

If the rest of MADE is as good as this then I eagerly look forward to singles D and E. Until then, I’ll be blasting this in my car, full volume, singing off-key, and not caring one whit about what people say.