After two and a half years, Infinite’s leader has finally made his solo comeback as Kim Sunggyu. It’s a much awaited release after his stellar debut album Another Me, which boasted the sadly underrated title track “60 Seconds”. Sunggyu has been constantly griping – in a joking manner – that his visual teammate L stole his MV spotlight in “60 seconds”, and thus was determined to get it back during this comeback. And indeed, Woollim made his wish come true by releasing two MVs, both of which deservingly star Sunggyu, especially after his variety skills and singing talent have been receiving increased recognition from the public.

“Kontrol”, one of the two title tracks, was written and produced by Nell’s Jongwan AKA Sunggyu’s idol. While most of Sunggyu’s songs lean towards the pensive and melancholy tone, “Kontrol” adds a certain layer of desperation and longing that is conveyed compelling through his honeyed vocals and the straight-up drama MV. “Kontrol” delivers an entrancing and beautiful melody, which builds up to the yearning “Come back to me” that’s complemented wonderfully with the echoey “ohs”.

The best songs are often those whose sentiments are relatable to everyone, and it seems that the lyrics of “Kontrol” were trying to achieve that very same goal. A pledge about not giving up, a song about endless waiting, a guarantee of an eternal welcome, it’s an heartache that everyone has felt before, whether it’s for a family member or a friend.

Your place will always, forever be just how you left it
So if by any chance you start to miss me again,
Don’t worry about it and come back to me

When the MV for “Kontrol” was first released, it sparked a whole train of speculation and discussion as to whether the numerous references to the Sewol tragedy was intended or coincidental. There were scenes of a yellow ribbon and a life jacket, which led viewers to suspect if it was meant to be a tribute to Sewol victims. Woollim declared that there were no such intentions, but at the same time, the song and MV was meant to be open to interpretation. And in this case, this will only be one possible analysis, although there definitely could be variations.

In this specific instance, Sunggyu stars as the main character who has lost his younger sister and the song serves as a desperate plea for her to come back to him, with the assurance that his doors will always stay wide open for her. The MV opens with the scene of Sunggyu drenched in water, a recurring motif in this MV, perhaps as a method of escaping from reality, and reliving the past. Within a few seconds, we get quick glimpses of the symbolic fishbowl, representing the bright and nostalgic childhood memories of the siblings, as they raised goldfishes and played pretend with dolls in it. 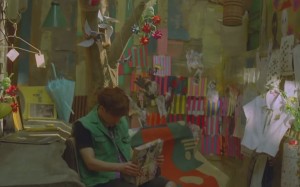 As he wakes to the present, he heads to his makeshift home, where the fishbowl, once full of vigour and life, is now left mouldy and untouched. The 360 panning of the camera also shows the stark contrast between the sister’s side of the room, which is washed in sunlight and colour, while Sunggyu’s portion is shrouded in darkness and emptiness. It’s telling that he leaves her belongings untouched, in hopes of her potential homecoming someday.

Moving over to her side of the room and going through her belongings (cute throwback to Infinite’s “Nothing’s Over” era), he’s once again reminded of all the unfulfilled dreams of his sister, which literally tortures him in the present. The fishbowl makes its appearance again, and this time round, Sunggyu picks it up decisively, and embarks on a seemingly final journey of retracing her last steps, to return her these happy childhood memories.

As he treks across the city, he’s overcome with recollections of walking the same routes with his sister, and eventually, his impulsive disposal of the fishbowl serves as an attempt to give her back these memories, spilling its contents and the toy house in the midst of it. It’s important to note that he runs along a bridge with carved encouragements on the railing, which is an initiative in Korea to prevent bridge suicides. This seems to hint that his sister committed suicide, and it ties in with the lyrics promising not to question why she left him behind.

Sunggyu’s sister makes her appearance mainly in the flashback scenes. A notable scene is when the viewers are given glimpses of the duo arriving at their new “home”, and as terrified as both of them were, his initiated handhold serves as a comfort that no matter what, they’re in this together. The detailed touch of the glow-sticks reminds the viewers of how young the two of them were when they were faced with this ordeal. 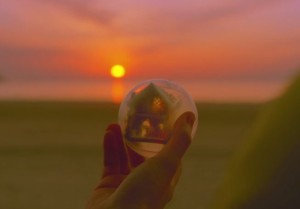 The final and most powerful scene takes place by the beach, with an red-orange sunset — representing closure — just by the horizon. Sunggyu takes his sister’s hand and offers her the aforementioned toy house, both as a wistful apology and a desired reconciliation. The camera pans and we see that while the sister is drenched in water, Sunggyu’s eyes are also not focused on her, suggesting that she’s only existing in his imagination and is perhaps not of this world anymore.

This MV is one of the more contemplative ones in K-pop, and the usage of a film camera (which takes rapid sequences of photos) was smartly utilized to capture the fuzzy memory-like nature of the story. Sunggyu’s characterization of the frustrated and regretful older brother was fairly impressive and he even mentioned that he couldn’t stop crying for an hour after filming. His ability to capture this essential emotion of “Kontrol” is best represented in his interview:

When I was recording the song, it felt like I lost one piece of puzzle after putting all other 999 pieces of puzzle together. I felt like I was missing out on something.

[youtube https://www.youtube.com/watch?v=R1DiozFguJg] Sunggyu also released a MV for “The Answer”, more accurately translated as “It Has To Be You”, and his voice is literally like silk here. According to the singer himself, falling in love is treading the line between heartwarming affection and obsession, which … is debatable but has been Infinite’s anthem for 5 years and counting. “The Answer” is accompanied by a typical solo-shot MV, and features a very lonely Sunggyu, and interestingly includes a monochrome-t0-colour transition. I really appreciate the stripped down and non-flashy nature of these MVs, which is appropriate with the style of 27. Sunggyu himself mentioned that he decided to go without his requisite heavy eyeliner makeup this time round, and instead, presented himself just as he is, a 27-year old man with dreams.

So readers, what’s your interpretation of the MV for “Kontrol”? Which title song do you prefer?