Out Of Love With Kara's 'In Love' 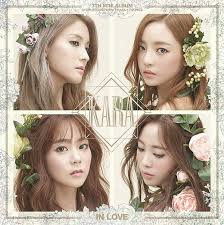 Legendary girl group Kara had a make-or-break comeback last year, with a line-up change and the decks stacked against them. Yet Gyuri, Seungyeon, Hara and Youngji proved that they still had it, and that Kara, with their upbeat electropop songs, weren’t going anywhere. Day and Night was one of the surprise pleasures of 2014 — not groundbreaking, but very fun. This gave their latest release In Love some breathing room, but I almost wish it hadn’t.

In Love kicks off with “Starlight,” which may very well be the best song on the mini. “Starlight” has a great trick opening: starting soft and gentle before blasting into a late Motown-esque sound. The horns and drumbeat are flawless, giving “Starlight” a driving energy. The true gem, though, is the bass breakdown two-thirds of the way through. It’s a glorious throwback that captures the energy and earnestness of Motown and brings it into the 21st century.

Sadly, title track “Cupid” fails to deliver on the promise of “Starlight.” It’s a complete mess. “Cupid” is another unfortunate entry in the trend of Franken-songs stitched together from parts. The chorus is sufficiently catchy, but the verses don’t work at all. They’re choppy and staccato; it sounds like the song is stuttering. The pre-chorus is fine on its own, but the smooth flow doesn’t fit with the other elements of the song. Everyone sounds shrill, but, worst of all, “Cupid” lacks energy. It’s a serious letdown after the punch of last year’s “Mamma Mia.”

“In Those Days” is the first ballad of the album and one of Kara’s best. “In Those Days” is a genuinely lovely song. The production is more than gentle; it sounds truly delicate — the result of a healthy dose of pianos, bells and snaps. It really works with Kara’s vocals as well, picking up on the pain in their voices as the quartet reminisces about a failed relationship. They’re filled with regret, but not over the break-up. Rather, it’s over how they handled it — by accepting it. They didn’t fight for their love, and that’s a hard pill to swallow, especially when compounded by the inability to move on.

“I Luv Me” is the weakest song In Love has to offer. It’s painfully generic in instrumentation. Sure, it’s peppy and upbeat, but it still lacks drive and innovation. The momentum feels forced instead of building naturally. Lyrically, “I Luv Me” pops a bit, but in a bad way. The blind devotion to a guy they’re not actually dating really makes the song sound like a stalker wrote it. It’s also extremely repetitive, with 90% of the chorus being “I love you.” “I Luv Me” ends up being a bad sugar rush you can feel in your teeth.

“Peek-A-Boo” is almost identical to “I Luv Me” except that it actually works extremely well. It’s just as upbeat and peppy, but the build is much less forced, mostly due to a fabulous use of piano, which just soars. “Peek-A-Boo” has an uplifting quality that goes beyond the song; it’s almost impossible to listen to it without cracking a smile. It even manages to avoid the obvious problem with building a chorus around a child’s game. “Peek-A-Boo” miraculously doesn’t sound childish in the slightest. It just sounds truly, blissfully happy. 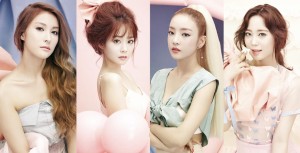 In Love winds down with “Dreamlover” the second ballad, and one that fails to live up to the standard of “In Those Days.” Where the latter was creative and fresh instrumentally, “Dreamlover” is stale. “In Those Days” felt genuine, like one or more members of Kara did let a relationship end without fighting, while “Dreamlover” is the typical K-pop soap opera melodrama. The one good thing about it is Kara’s great harmonies, but that’s not enough to save it.

The resounding problem with In Love is that it’s sedate. Only “Starlight” and “Peek-A-Boo” have any real energy or drive to them. Kara, as far as I’m concerned, are the real electropop dance track queens. Just look at “Mister,” “Wanna,” “Step,” “Jumping,” “Pretty Girl” or “Mamma Mia” — even “Damaged Lady” was a driving track bursting with energy. On In Love, though, Kara sounds sweet and gentle and not like Kara in the slightest.