Boa Shows a New Side in "Kiss My Lips" 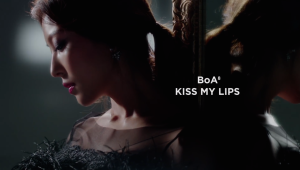 The Queen is back! After the adorable pre-release MV for “Who Are You” starring Exo‘s Sehun, Boa finally steps into the spotlight with the single “Kiss My Lips.” The main single from her self composed, self produced album of the same name serves as yet another demonstration of Boa’s remarkable versatility after fifteen years in the industry.

It’s unfair to say that “Kiss My Lips” shows a more mature image of Boa, as her releases have always been packed with an element of maturity and independence that few in the industry could match. It is, however, fair to say that “Kiss My Lips” — both aesthetically and musically — showcases an elegantly feminine side of Boa that previous releases have not explored in the same depth.

“Kiss My Lips” is not necessarily a dynamic track, but the sophisticated steady rhythms of synth and guitar set a steady groove that Boa’s vocals only enhance. After the fade in of the retro synth at the beginning of the song, the backing track is a mesh of unidentifiable synths that bled together quite well to create a sensual — but slightly funky — mood. The pre-chorus offers one of the most interesting chord progressions of the track before it falls back into a steady chorus that is complimented with some synth-y guitar. Though the bridge falls slightly flat, it does help the track to maintain a sensual mood overall. 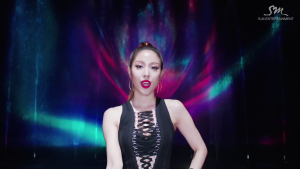 Boa is an incredibly consistent vocalist, and “Kiss My Lips” is no exception. Her unique tone sets her apart from many of her contemporaries. Beyond her tone, what also sets Boa apart is that she is very much aware of her range and vocal abilities. “Kiss My Lips” doesn’t push for any power notes but instead relies on Boa’s consistency. Boa’s ad-libs are some of my favorite in K-pop because she is the master of both the low moan and the airy high notes — her use of such ad-libs in “Kiss My Lips” provide some much needed dynamics against the steady back track.  They also cement the sensual mood of the release.

Lyrically, “Kiss My Lips” leaves me a little confused. Boa’s self-written lyrics explore the tension of attraction and flirtation as she beckons her lover closer but also calls out their hesitancy to approach her.

Maybe I’m just a pervert, but “Kiss My Lips” sends me the same questionable — and most likely unintentional — innuendo vibes that Red Velvet’s “Ice Cream Cake” did.

Don’t try to hide it
The more you move, the more I wanna go to you
The more my heart gets moist
My eyes are on you
I just wanna know how you feel about me

Perhaps it’s an expression that is lost in translation, but I’ve never heard of a heart being described as “moist” before. The lyrics continue much like this in a push and pull as Boa grows more and more frustrated, with little development aside from her continued request to “kiss my lips.” Where the lyrics are lacking, Boa’s vocal styling adds enough emotion to convey the sentiment the words alone are lacking.

As for the accompanying music video, we’d already been spoiled with the narrative of “Who Are You,” so if we expected anything less than a box MV, we were probably setting our expectations too high. That isn’t to say the box MV is a complete disappointment — the MV offers nearly four minutes of exclusively Boa, which could never be a letdown. Boa has had better boxes in her time (the meta box of “Girls on Top,” anyone?), but she is the kind of confident performer who can fill any space and charm the viewer along the way.

The MV makes interesting use of light and color, with heavily saturated blues and purples that contrast nicely against the dimly lit space. One of the most impressive moments of the MV is the ethereal projection of Boa on a digital waterfall. The dynamic lighting and artistic use of the backdrop, in addition to the styling make the MV a visual treat — well, as much of a visual treat as a box MV can be. 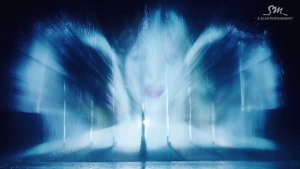 Boa inhabits the video-scape alongside showgirl style feathers and an animated backdrop. Whether she is wearing a frilly white dress, an evening gown or a skin-tight black suit, she exudes a flirty confidence that fills each frame nicely. Her coy smiles and accompanying hair flips bring life to the track and what could have been a flat MV. The contrasting cuts between Boa being demure in an evening gown and dancing aggressively in the black suit also play nicely into the lyrical content of the track itself. While the camera work is at times a little too shaky, the various sets and cuts flow well enough into one another.

One cannot discuss Boa without discussing choreography. Her signature powerful style is not abandoned in favor of more sensual moves, though this is the wiggliest Boa choreography I’ve ever seen. Many times it felt reminiscent of Red Velvet’s “Ice Cream Cake” choreography. That being said, the choreography for “Kiss My Lips” does feature some of the sexiest combinations Boa’s ever performed. The choreography exhibits a different side of Boa’s femininity, which is a treat to watch. The choreography, like all other aspects of the release, exhibits a nice play between overt sexuality and innocent flirtation — and Boa is convincing through every step.

Boa never stops evolving and bringing new concepts to the table. It’s almost strange how Boa feels that this release is the first time she will show her “girly” side. In a recent interview, Boa joked that her promotions for “Kiss My Lips” will be the first time she has promoted in a dress or skirt — which, while humorous, points to Boa’s versatility outside of stereotypically “feminine” concepts.

“Kiss My Lips” explores a more sensual side to the confident Boa we know and love — there’s a mature edge to the release that is complimented by moments of innocent sweetness. Together, these elements combine into something that, though new, is still distinctly Boa. It’s great to see Boa demonstrating so much creative control in her fifteenth year in the K-pop scene. While “Kiss My Lips” is not necessarily her strongest release, Boa’s quality and consistency is unmatched in the K-pop sphere. They don’t call her the queen of K-pop for no reason, after all.