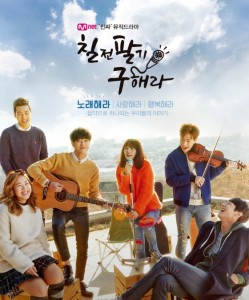 With script writers and producers from broadcasts like Real Men, Music Bank, Superstar K and Dancing 9 participating, Persevere Goo Hae-ra was loaded with potential as a musical drama — especially when one factors in its high production value by Mnet. Unfortunately, those expectations have fallen flat on their face and been repeatedly run over. It’s not simply that Persevere, Goo Hae-ra is disappointing — it’s just plain bad.

Persevere, Goo Hae-ra’s predecessor, Monstar, was definitely one of the dark-horse dramas of 2013. While it had elements of the ridiculous, it also managed to be touching. As such, when Persevere, Goo Hae-ra was announced, expectations were high for Mnet’s sophomore original musical production.

After a completely non-related musical number, the first episode went something like this: Goo Hae-ra (Min Hyo-rin) is an aspiring singer who has a dream to have her late Father’s music be heard. Her childhood best friends slash neighbors — fraternal twins Kang Se-jong (Kwak Shi-yang) and Kang Se-chan (BA14’s Jinyoung) — share her passion for music. The trio auditions for Superstar K2 where they pass initial auditions and are put in a group with Henry (Henry Lau), Lee Woo-ri (Voice of Korea Contestant, Yoo Sung-eun) and Jang Goon (Ulala Session’s, Park Kwang-sun). Due to some unfortunate mishaps during their performance, the group is eliminated and dreams are shattered.

Honestly speaking, the first episode had a lot of promise. We were presented the main love triangle of Hae-ra and the two brothers — who also serve as the show’s eye candy; We had a glimpse into Hae-ra’s emotional back story; the music numbers were fun and upbeat. Above all, the fellow contestants of Superstar K6 comprised a team of underdogs that the audience could root for. Their failure as a team, though disappointing and slightly over-dramatic, set up a challenge for the cast to overcome and gave the viewers a reason to tune in in the future.

All this promise, however, was lost in the subsequent episodes despite the fact that the team does re-connect years later. I’m not sure what happened to the writers between the pilot episode and episode two, but it seems they chose exactly all the wrong elements of Monstar to amplify in its successor. The drama doesn’t know if it wants to be comedic, tragic, satirical, mature or youthful. Instead of trying to sort through these elements, they’re all thrown together as the drama wavers between attempts at humor and attempts at emotional depth. I’m not saying the humor and sentiment are mutually exclusive, but Persevere, Goo Hae-ra is exceptionally inept at weaving them together. 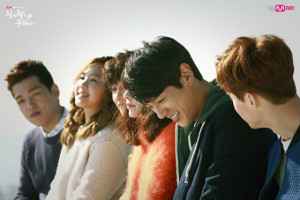 The most painful element of the drama thus far is its quick descent into makjang territory. It’s only episode four and — without spoiling too much — already we have seen major character deaths, birth secrets and character doubles. All of these exist in addition to the record label drama, love triangles and cut-throat entertainment industry politics. The makjang, combined with the gratuitous time skips and whiplash inducing mood swings make Persevere, Goo Hae-ra a disorienting roller coaster ride.

Korean dramas are no stranger to archetypes, but Persevere Goo Hae-ra goes above and beyond. We have everything from the wealthy heiress turned pop star (Seo Min-ji), to the quirky foreigner. Poor Henry, who — while riding his wave of post solo debut and Real Men fame — has been handed a script for this drama where his job his to randomly speak English and be oh-so-adorably culturally ignorant to everything. It ain’t cute.

Whereas the characters of Monstar chose their stereotypical presentations, the characters of Hae-ra seem to have had their characterizations and stereotypes forced upon them without any rhyme or reason. The only character relationships that truly make sense are those that exist between Hae-ra’s household and the Kang brothers’, with both families closely intertwined for years. Who knows, maybe as we are fed more back-story the side characters will come to life — but I’m not holding my breath. 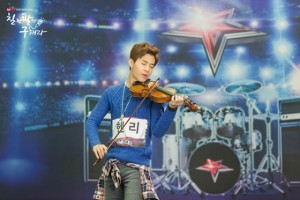 In the first episode, Hae-ra shined with that quirky charm and dedication that is characteristic of many female leads. However, as the show has progressed, Hae-ra has become the definition of hot then cold with her actions lacking rationality half of the time. Hae-ra has grown resentful and has lost the spark that made her charming in the beginning of the series. (Though, I too would be bitter if I was forced to have the same hair cut my entire life.) Maybe it’s simply that the writers refuse to let her character develop beyond complicated feelings for the not-so-twin brothers and their look-alikes. If the show is described as a coming-of-age tale, shouldn’t Hae-ra’s character grow throughout the series rather than deflate?

One of the few rays of hope in this tragedy of a drama is the music itself. The original tracks produced for this drama are well executed and actually tie into the story well — with the exception of the introductory High School Musical-eque number. The inclusion of Yoo Sung-eun was a smart decision, as she is able to emote vocally, giving the OST sentiment that the drama itself is unable to convey. The duets between Min Hyo-rin and Jinyoung have also been impressive. 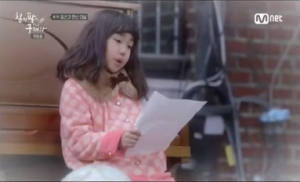 Another promising element of the show is the wide array of cameos and television show appearances the drama has been able to incorporate. Since the main characters are navigating the Korean entertainment world and the writers hail from many successful Korean broadcasts, the show provides a dramatized behind the scenes look at many elements of Korean entertainment we as fans generally don’t have access to. While there is sufficient room for critique of the industry, unfortunately it appears that Goo Hae-Ra is more content with focusing on ridiculous plot elements.

Looking back on the previews for Persevere, Goo Hae-ra, I feel like I’ve been cheated. I was promised a musical campus drama, with singing in the hallways and grand dance numbers. What I’ve gotten is a lot of confusion, and a rage that resulted in me nearly hurling my remote across the room screaming “You can’t just do that!”

Long story short, Goo Hae-ra is not the only one who has had to persevere during the first four episodes of this drama. Struggling through these episodes has been a test of my patience and I have no strength left. Any synonym for ‘persevere’ you can think of, I assure you, I cannot do it. In the words of fellow Seoulbeats writer Lo, “I wash my hands of [this] nightmare!”

Readers, are any of you keeping up with Persevere, Goo Hae-ra? What about the drama either scared you away or keeps you tuning in every week?