Baby Kara to Debut as April 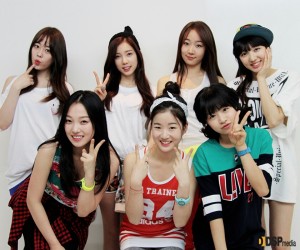 Remember all the way back in 2014 when DSP decided to select Kara’s new member from their stable of trainees via a competition show? Kara Project shadowed seven hopefuls, with Heo Young-ji eventually being selected. One of the biggest complaints about Kara Project — aside from the obvious ones — was that the show felt like a predebut show, not a competition show. Turns out, it was. We just had to wait for a little while.

DSP Media has announced that they will be debuting a new girl group, called April, at some point during the first half of 2015. While they didn’t outright say that those six from the show will be in April, it’s pretty obvious that a good majority will be drawn from them, what with the members “already having thousands of fans.”  It is possible there were some line-up changes from then to now, thus the use of the phrase ‘DSP Girls’ over the more common ‘Baby Karas,’ but, come on DSP. We’re fans. We’re too genre-savvy to think that’s not them.

What do you think, readers. Will April rise to the top? Are you excited about seeing Sojin, Somin, Yuji, Siyun, Chaewon, and Chaekyeong on the stage again?

April Breaks Out of Their Shell with “The Ruby”