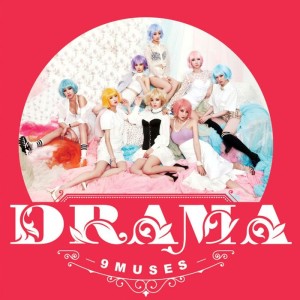 Following a very busy 2013, including the release of their first album and best selling song, 9Muses spent most of 2014 getting press for all the wrong reasons. Namely, members Lee Sem, Eunji, and Sera all left the group, which was a real problem considering that Lee Sem and Sera were the best rapper and vocalist, respectively. This left their latest comeback, “Drama”, is a real make-or-break song, and honestly, my money was on “break”. However, 9Muses rose to the challenge and delivered a fun little pop song.

“Drama” is one of those songs that I almost have to love because it hit one of my sweet spots: the things whose mere presence can entice me to forgive more than I should. Number one is horns. Number two is what has “Drama” has: recursion! That is to say, entertainment about entertainment.

Ever notice how pop culture never has pop culture in it? Most pop culture is created in a semi-vacuum: it has tropes and conventions that we, the audience, notice but are never picked up on or noted by characters. Recursive entertainment breaks from that to point out the tropes or talk about making a drama. This gives us dramas about idols, songs about singers, or a song about wondering how life became a drama.

The driving story of “Drama” is indeed something out of a drama. Girl likes Boy. Girl’s Best Friend likes Boy. Best Friend and Boy start dating. Girl thinks they’re happy. Best Friend says it’s not working out, and she’s going to break up with Boy. Girl wonders if she can date Boy. She also wonders just how her life got to this point and that is what makes “Drama” work. Most songs would get wrapped up in the tragedy of the love triangle, but “Drama’s” tongue is firmly in its cheek. It gives it a very playful energy that breaks up the winter monotony nicely.

It’s good thing that “Drama” hits a sweet spot, because it starts on a low note. Rather than put the awkward rap in the middle, “Drama” gets it out of the way first thing. With the departures of Lee Sem and Eunji, it appears that rap duties have been handed off to Euaerin and Seungah. While I am sure they are both lovely people, neither of them are good rappers. It’s a very off-putting way to start a song. 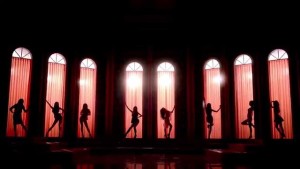 Luckily, the rest of the song is quite enjoyable. Star Empire is clearly very aware that none of the members have amazing voices, but most of them have stable voices with similar qualities, and they use that. Just about everyone has a softer, airier voices. This is matched with a lot of stylized sighing and lilting at the ends of lines. The effect of this are vocals that sound very feminine without sounding girlish.

This meshes nicely with the electro-motown vibe that the instrumentals carry. On the surface, “Drama” is basic electropop, well-executed but not extraordinary. Underneath it, though, are some very sixties beats and baselines that provide a retro feel without being obvious.

The MV is also heavily stylized, which saves it from the wrath normally served on box MVs. It’s not even a box MV; it’s a black box MV. Most MVs will try to not look like a set or soundstage, to make it feel more realistic. “Drama” instead evokes the feeling of a black box theatre: needed, very obvious props and an intimate setting that is obviously a stage. It sets the stage for a very theatrical MV, as one would expect for a song called “Drama”. 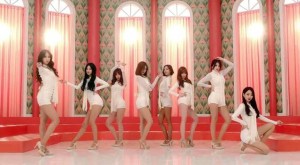 The theatrical feeling is carried through the rest of the set designs. The girls dance on a stage that looks straight of a music show, and many of the solo shots are framed around stage curtains. My favorite touch is the shots of the girls in slumber party gear. After all, if the rest of the MV is 9Muses in a drama, then the casual shots are girls watching a drama.

The styling choices also bring to mind a very theatrical time, with some classic Hollywood looks and shout-outs. Little black dresses, Breakfast At Tiffany’s, twists on tuxes, and Marilyn Monroe‘s most famous scene all make appearances in “Drama”. I love how the theme of the song was really carried through into the MV. While disconnect between lyrics and MVs is the new normal, there was a lot of work put into making sure the playful, self-aware lyrics were reflected in the MV.

On the whole, “Drama” is bright, flashy, and fun. It’s certainly not high art by any standards, but it livens up a dreary winter day and makes it’s singers look and sound pretty good. “Drama” is an excellent effort that proves 9Muses still has it.